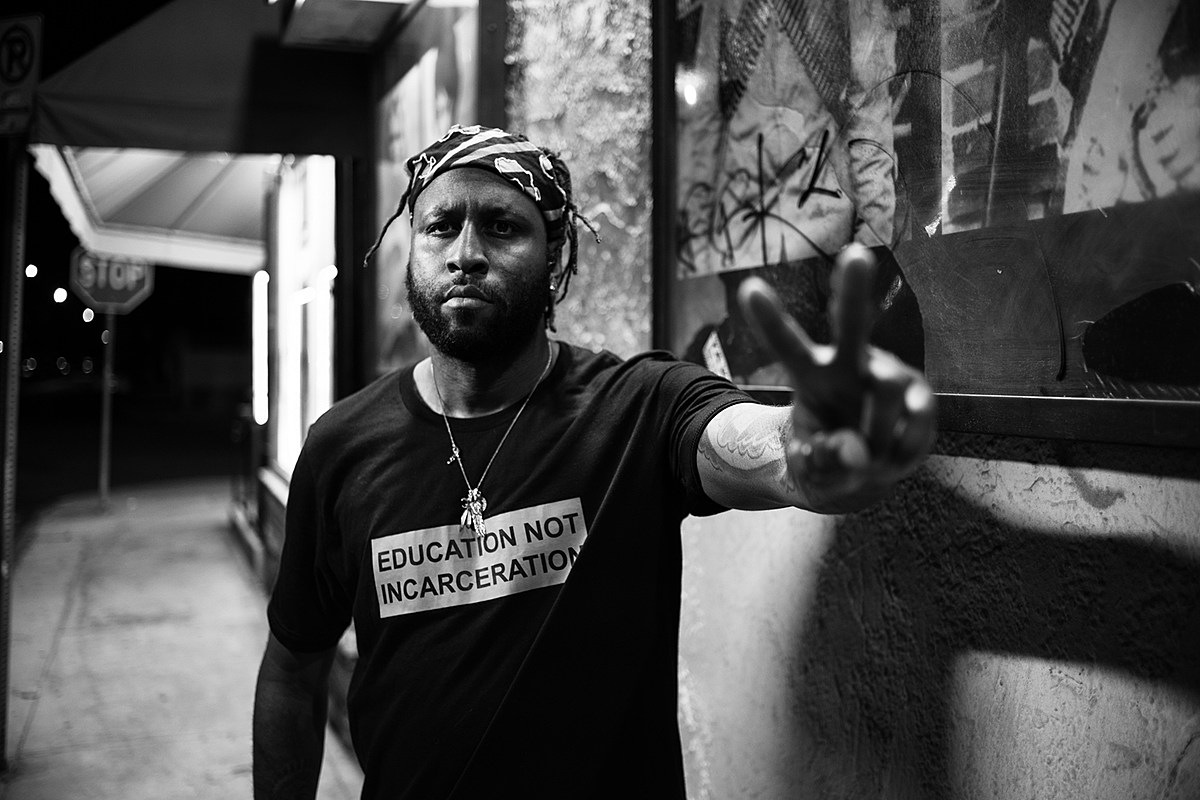 This time one year ago, Fire From the Gods had just released the timely song and video “Break the Cycle” as singer AJ Channer had just traveled to Minneapolis and Atlanta to take part in protests following the death of George Floyd. The musician penned an op-ed for Loudwire on Juneteenth about his experiences and provided a photo gallery from his participation in the marches. Now, Channer has checked in one year later with another op-ed titled “Red, White, Blue and Bruised” sharing his thoughts on where things stand after a year in which many hard conversations have been had.

This commentary comes as Fire From the Gods are releasing their new EP, American Sun (Reimagined), a collection of stripped down versions of songs from their still timely 2019 album American Sun. The four-song set is viewed as a reflective statement on the events of the past year as the band prepares to work on their next album.

Of the EP, the band said the following in a collective statement, “American Sun (Reimagined) is a reflection of what we’ve all been through this past year. We originally dropped the album on an arena tour with an exciting, busy year of touring and promo ahead. Sadly, the world shut down a few short months later and we just never felt this album got the full life it deserved. American Sun (Reimagined) is our love letter to this album; now we feel a little more complete and ready to create what’s next.”

Last year I penned an opinion piece about the two days I spent in Minneapolis after the George Floyd riots kicked off. Amidst civil unrest and a global pandemic, America was forced to take a cold hard honest look at herself.

I mentioned the coming together of multiple communities. I spoke of the openness and willingness to heal age-old wounds. For the first time in a long time, it seemed like we wanted to confront our dark past and heal. It felt like we wanted to change and finally break the cycle of ignorance, hatred and division. There was a lot of confusion, but there also was a lot of hope.

Many questions were asked of us. We the people were put to the test. But for every step we took forward, we seemingly took two or three steps back. Here we are a year later and some of those questions are still unanswered.

Buzzwords and political slogans become the language of every conversation.
My opinion versus your fact. My feelings versus your reality. Very rigid lines were drawn, and a war of attrition began with this looming threat of hostility in the air.
Tough subjects were brought to light, like “What is white privilege?” “What is institutional racism?” “What is Defund the Police?” Why does one group scream “Black Lives Matter” and another “Blue lives matter?” There was a lot of “What the hell is going on?” All the while we were battling COVID-19 and lockdowns. Yikes!!!

Then there was that damned election. Our social and political leaders were running around scrambling for support for their various platforms. There were fake callous calls for calm backed by an ominous message of us vs. them. There was the noise coming from the talking head politicos, media personalities and a set of more dangerous individual toxic voices. Voices that sprang up from a culture growing amongst the people, the culture of random social media political commentators. A group of everyday people varying from the educated to the uneducated and uninformed to the logical.

Even when someone “made good points,” they used whatever platform or medium needed to create echo chambers where their opinion could not be challenged or contested because of the sheer amount of support it garnered. Whether right or wrong, these self-proclaimed gurus and masters of social understanding were steering people down a dangerous path. These geniuses did nothing but add fuel to the already raging fires burning across American cities.
In all fairness, who could blame them though? We are individualistic and rebellious by nature. It’s in the DNA of our culture to be vocal about our opinions. But still, sometimes it’s best to be quiet, listen and let the guiding voice inside us all speak.

We all want life, freedom, safety and happiness. Those things do not need to be had at the expense of others. These social media know-it-alls sounded selfish, ignorant and at times downright hateful. I was fed up with it as were many others. We had to purge ourselves of this poison. The divisive vitriol exposed people and justified the very reason why those tough questions — plus more — had to be asked.

We went from hope to despair in a matter of seconds. People acted as if the apocalypse was at our doorstep. Acting on impulse, we went from “Let’s stand together” to wanting to absolutely destroy any and everything in our paths. The division and hate was palpable. Who are we? What happened? The death of a random Minnesotan sparked what seemed like a cultural revolution and summer of change. But it culminated into an overblown over-politicized mess.

Fire From the Gods released a record called “American Sun” a year before any of this transpired, and the words on this record spoke truth like no other. We had written the soundtrack for times like these. It wasn’t because of foresight but rather a desperate need to enact change. We heard from fans that tracks like “Right Now,” “Break The Cycle” and the title track “American Sun” became gospel.

The message that I have always stood by seemed more important than ever. But unfortunately, due to COVID-19, we weren’t able to tour or reach the many ears, minds and bodies that needed to hear our music. While some in our scene used the opportunity to capitalize off the tense social climate, we decided to let our music speak our thoughts for us. It’s a power we’ve realized we have as artists, now more than ever.

As we continued recognizing that power, paying attention to each emotion and lyric put into our music, conveying what we were feeling this past year, as the rest of the world was yelling, the Capitol riots of Jan. 6 happened. It capped off a year of chaos and signaled a bottom to our descent into madness. We haven’t fully rectified our predicament, but there is a sense that the people have had enough. Did cooler heads prevail? I don’t know.

Lockdowns are lifting, people are returning to work and the dependence on media types and politicians seems to have abated for time being. I have always stated that politics is but a small part of the human experience. It should never be our end all and be all. Social problems are not always fixed with political solutions. We had forgotten who we were. There are still quite a few things being overlooked during our effort to reclaim our sanity, but all in all the voices of the people were heard and anger was purged.

Unfortunately, now that the world has returned to normal, it’s been business as usual in the States. We are still shooting each other like gunshots are the only means of communication. Living standards haven’t improved much. The rich continue to get richer and the poor are dying just to live.

Our great society took some licks and is still in the fight. A fight that we should never give up. On the album, we say: “I am the refugee emerging from the darkness of my past and doing all that I can to better myself. I am not your enemy and that if we trust each other we can all bask in the light of a new American Sun.” It’s a true gift as an artist to be enlightened by your past self, and find new truths through a different lens. We can’t control how we are affected by the world, but we can control what we do with those experiences, thoughts and feelings. We’ll see you out on the road soon with a fuller perspective.

IN US WE TRUST.

As stated, Fire From the Gods’ American Sun (Reimagined) is out today (June 18). Check out the video for the title track below and pick up the EP via the platform of your choosing here. The group is also returning to the road and you can catch them on tour at the stops listed on their website.

Loudwire’s picks for the best rock songs of 2021 so far.

Italy’s secret beaches: Step off the tourist trail and discover stunning and…