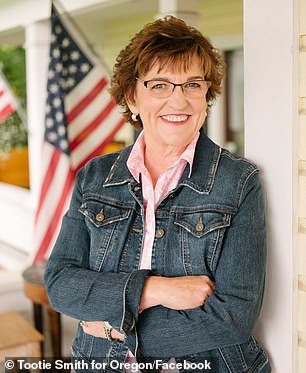 An incoming Oregon county commissioner has vowed to hold a Thanksgiving dinner for ‘as many family and friends’ as she can find as she refuses to obey the governor’s strict stay-at-home orders and the six-person limit on gatherings.

Tootie Smith, who is set to begin her position as chairwoman of the Clackamas Board of County Commissioners in January, has publicly said she will defy Gov Kate Brown’s orders.

During a press conference on Friday, Brown ordered a two-week statewide ‘freeze’ on businesses and gatherings – the harshest restrictions since the stay-at-home order imposed on Oregonians at the beginning of the coronavirus pandemic back in March.

‘My family will celebrate Thanksgiving with as many family and friends as I can find. Gov Brown is WRONG to order otherwise,’ Smith wrote.

Meanwhile, cases in Clackamas County set a new record with 669 new infections in the second week of November, which is the latest information from the county. The rise in cases also includes a 14-person outbreak at the Clackamas County Sheriff’s Office. 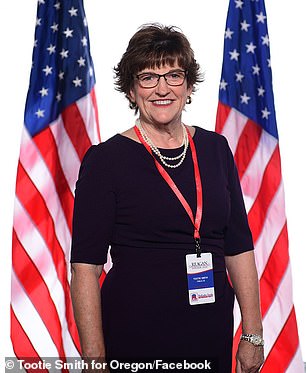 Incoming Oregon county commissioner, Tootie Smith (left and right), has vowed to hold a Thanksgiving dinner for several family members and friends as she refuses to obey the governor’s strict stay-at-home orders 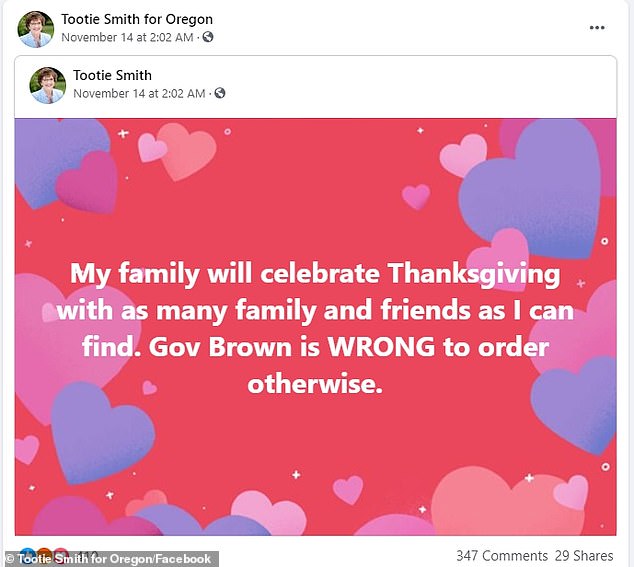 ‘My family will celebrate Thanksgiving with as many family and friends as I can find. Gov Brown is WRONG to order otherwise,’ Smith wrote in a Facebook post on Saturday

The Republican official followed her first message up in another Facebook post on Sunday, saying: ‘As for my family, it is always their choice to celebrate Thanksgiving or any other holiday.

‘The people I represent are informed, intelligent and educated citizens of the US and Clackamas County. They understand the guidelines set forth for Covid prevention listed by the CDC: wear masks in public, wash hands, six feet distancing and stay home when sick,’ Smith said.

She added: ‘I believe my citizens can make their own informed decisions and maintain their personal rights.’

Smith, who served in the Oregon House of Representatives from 2001 to 2005 and as a Clackamas County commissioner from 2013 to 2017, refused to say how many people she plans to host at her home for Thanksgiving.

She did confirm to The Oregonian that it will be more than six people from multiple households.

Smith she it would also be the decision of her guests to determine if they want to wear a mask inside her home.

Smith believes that more coronavirus restrictions are damaging due to increasing rates of child abuse, domestic violence and depression that come with them.

The 63-year-old, who is considered high-risk for the virus due to her age, told the Oregonian that she doesn’t believe she’ll get sick because she’s healthy and cautious.

The Republican official followed that message up in another Facebook post on Sunday, saying: ‘I believe my citizens can make their own informed decisions and maintain their personal rights’ 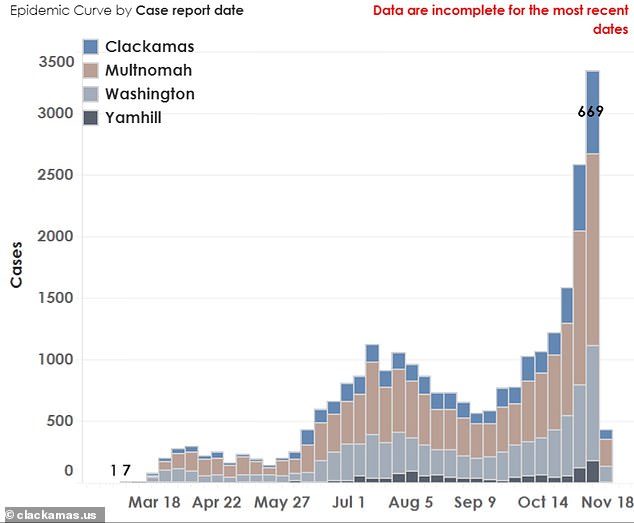 Meanwhile, cases in Clackamas County set a new record with 669 new infections (depicted) in the second week of November, which is the latest information from the county. The rise in cases also includes a 14-person outbreak at the Clackamas County Sheriff’s Office

‘I don’t have high blood pressure,’ Smith said. ‘I’m not overweight. I’m not diabetic. I don’t have cancer.’

‘But I understand that there are people out there who do have those diseases. And they need to be cautious and they need to stay home, if that’s what they choose to do,’ she added.

Some of Smith’s supporters thanked her for standing against Brown’s restrictions.

‘Thank you for standing up again(st) this dictator we unfortunately call our Governor,’ one person wrote under her post. ‘We need more Oregonians like you!!’

‘Ignore her. Live your life. She [the governor] ain’t the boss of us,’ another said.

But many more people were against Smith’s views and called her out for putting other people’s lives in danger with such practices.

‘I am a nurse. Your ignorance in the face of a global pandemic is heartbreaking,’ one person said. ‘You would put your family, friends, community, health care providers, and first responders in harm’s way? …Who raised you? Wolves?’

Another said: ‘How about listening to science. Stop being part of the problem.’

Brown’s statewide freeze will start Wednesday and run through December 2. In Portland, which is experiencing the largest increase in cases, the freeze will be extended to four weeks.

As part of the order, all gyms will be closed, while bars and restaurants will be prohibited from providing dine-in service. 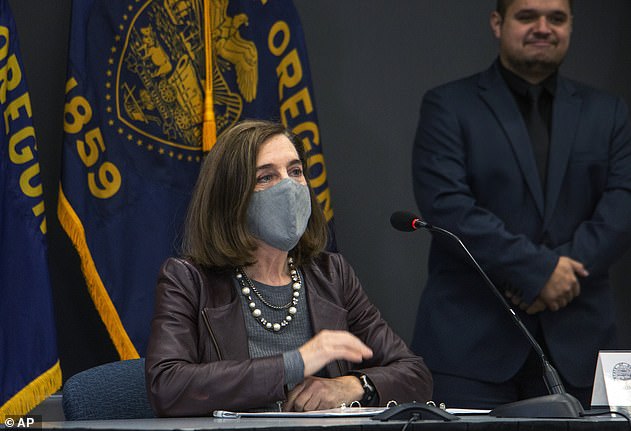 Cases have spiked dramatically across Oregon in the past two weeks, with 868 new infections recorded on Sunday.

The total number of cases in Oregon now stands at 56,880.

Meanwhile, 342 Oregonians are currently hospitalized with COVID-19, including 71 patients in the Intensive Care Unit.

Despite an increase in both cases and hospitalizations, there has been no consistent surge in the fatality rate, which fluctuates between two and 14 deaths daily, as it has done for the past three months.

Across the state, 761 people have died from the virus.

In addition to her restrictions, Brown, along with Gov Jay Inslee of Washington and Gov Gavin Newsom of California, have formed a West Coast travel advisory requiring residents returning from out-of-state or visitors from the rest of the country to quarantine for 14 days.

According to Smith’s campaign website, she started three corporations including Prairie House Inn Bed and Breakfast, a hospitality site in her hometown of Molalla, with her husband of 42 years.

The couple owns Meadowbrook Hill Farm, a hazelnut farm where they reside. They also have a daughter, Tess.

In addition to her political background, Smith is also the author of ‘Pay-to-Play: Sexual Harassment American Style’.