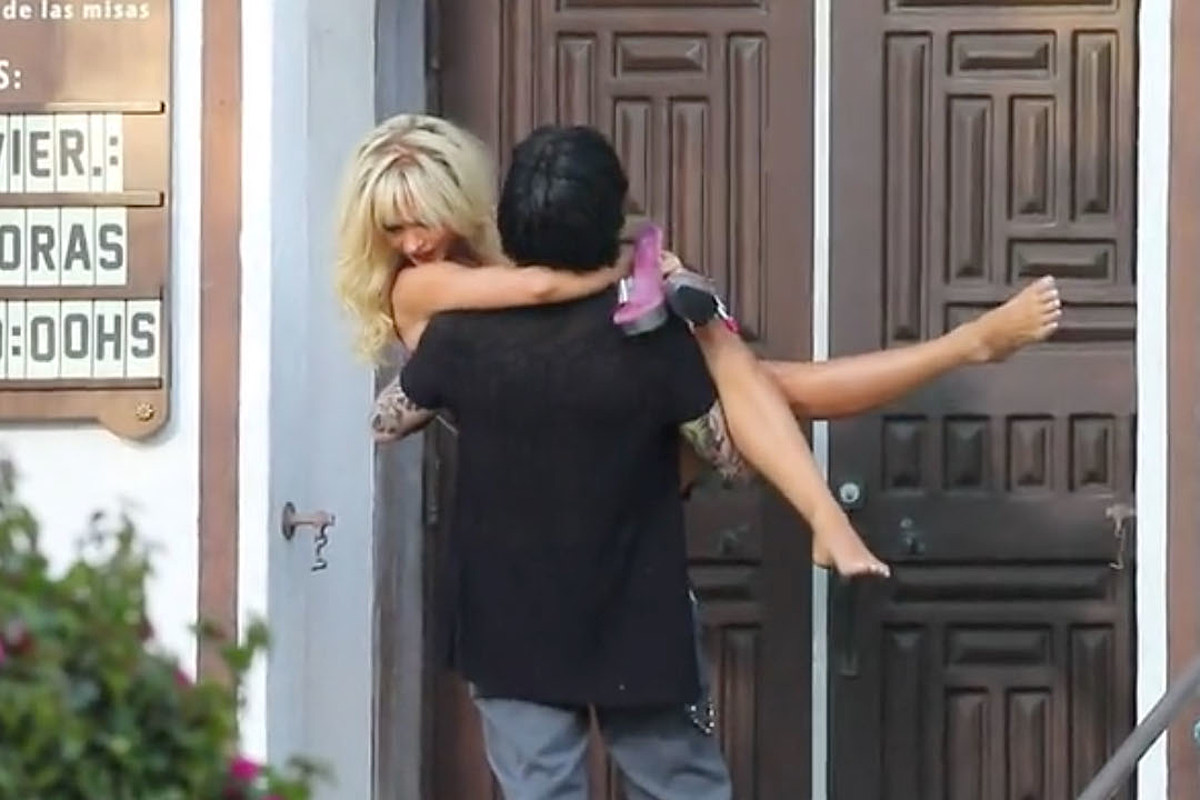 Part of Tommy Lee‘s headlong 1995 wedding to Pamela Anderson was recently re-created by actors Sebastian Stan and Lily James on the set of Pam & Tommy, Hulu’s upcoming series centered around the torrid relationship between the Motley Crue drummer and the actress. On Tuesday (June 8), the Daily Mail reported as much when it shared photos and video captured during the filming of the scene.

While no release date for the show has emerged, plenty of information about its production has. In addition to Downton Abbey‘s James and The Falcon and the Winter Soldier‘s Stan as Anderson and Lee, respectively, funnyman Seth Rogen, also one of the series’ producers, will star as the man who leaked the couple’s infamous sex tape, Internet Entertainment Group’s Seth Warshavsky. Nick Offerman, Taylor Schilling and Andrew Dice Clay also have roles on the show.

Down toward the bottom of this post, watch the video Stan and James filming some of Pam & Tommy.

The section of the scene being filmed in the clip, seemingly taken by a nearby spectator, shows the actors in character as the dramatized Lee flings open the doors of a building to carry his new bride over the threshold. Lee and Anderson got married on the beach in Mexico, so perhaps the moment portrayed here is from a subsequent part of the day.

Last month, Stan and James first revealed their in-character looks as the rocker and the screen star. Now, it seems clear that the rushed Feb. 19, 1995, nuptials between Lee and Anderson — coming after only knowing each other about four days — will provide a pivotal part in the series, as one might surmise.

Three weeks ago, Courtney Love criticized the show in a since-deleted Facebook post. The Hole frontwoman called Pam & Tommy “fucking outrageous” and “vile,” among other swipes, for dramatizing the tumultuous relationship that involved her friend Anderson.

Neither the Motley Crue member nor the Baywatch actress have yet to offer comment on the series, and they are not involved in its production.

Lee and Anderson were married until 1998, but the pair continued to accompany each other while legally split into the early 2000s. Anderson wed Kid Rock in 2006, but they divorced the following year; she’s currently married to her former bodyguard, Dan Hayhurst. Lee married Brittany Furlan in 2019.

23 Actors Who Transformed Into Real-life Rockstars for Movies