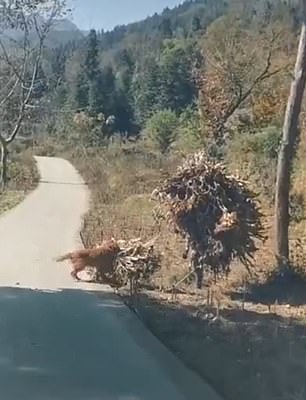 Furry helpful: Pet dog has its mouth full trying to help its owner do farm work by carrying cuttings

By Billie Thomson For Mailonline

This is the heart-warming moment a dog helps its owner do farm work by carrying cuttings in its mouth.

The short clip, reported to be filmed in south-west China, appears to show the pet assisting a man who is transporting what looks like a massive pile of dried leaves on his back.

It has gone viral on Weibo, the Chinese equivalent to Twitter, after being shared by a state-run media outlet.

The trending footage was published today by Passion News, a state-approved news outlet affiliated to the Young Pioneers of China.

It was filmed recently by an unnamed web user who drove past a field in Luzhou, Sichuan Province, the report said.

The video shows the dog wagging its tail while trying hard to drag the bale with its mouth.

It seems to be struggling with the weight of the pile but refusing to give up.

The man, reported to be the owner, is standing next to the pooch seemingly waiting for it while carrying several bales on its back. 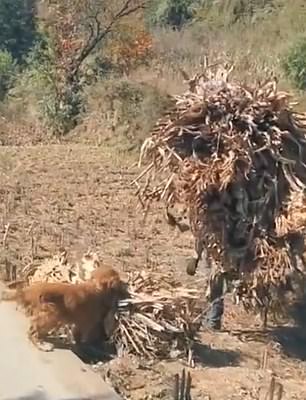 The short clip, reported to be filmed in south-west China, appears to show the pet dog assisting a man who is transporting what looks like a massive pile of dried leaves on his back

The sweet scene has moved many web users, who swarmed to praise the dog.

One fan wrote on Weibo: ‘What a thoughtful furry kid.’

Another viewer commented: ‘[It] was trying its best to share its owner’s worries. Kudos to the caring dog.’

A third person said: ‘I wanted to cry when I watch the video.’

Amber-list holidays: Will two jabs give summer trips across Europe the green light?

Officer ‘down’ after shooter opens fire in Denver suburb: Injured cop is…