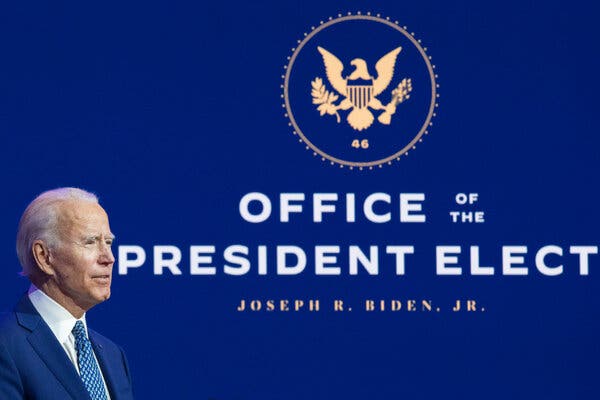 For months, Joseph R. Biden Jr. campaigned in part on a simple promise: Elect him, and the chaos and confusion, hirings and firings and the unending stream of derisive tweets would end. And in the first workday of the transition, the dichotomy in style between President-elect Biden and President Trump came once again into stark relief.

Just minutes after Mr. Biden held a news conference to address his plans for confronting the coronavirus pandemic, Mr. Trump announced on Twitter that he had fired his defense secretary. And he continued to be active on his favorite social media platform on Monday, offering more unsubstantiated and false claims of election fraud, as news broke of additional positive coronavirus cases within his inner circle, including Ben Carson, the secretary of housing and urban development.

By contrast, Mr. Biden and his team continued to offer measured statements as they began to sketch out their transition plan and build their team. The president-elect unveiled a 13-person virus-task force while continuing to urge Americans to wear masks and seeking to temper expectations about a virus vaccine that has shown positive early results.

“It’s clear that this vaccine, even if approved, will not be widely available for many months yet to come,” Mr. Biden said about a vaccine made by the drug company Pfizer. “The challenge before us right now is still immense and growing.”

Even as Mr. Biden pressed ahead with his transition plans, the Trump campaign and its allies were continuing their frenetic fight to challenge the results of the election, which Mr. Trump has lost. On Monday, the Trump campaign announced it had filed a lawsuit in Pennsylvania asserting that ballots cast in person there were scrutinized more closely than those sent by mail.

And by the end of the evening, Attorney General William P. Barr had issued a memo authorizing federal prosecutors to investigate some allegations of voter fraud — a move that broke with the Justice Department’s longstanding policies intended to prevent law enforcement from affecting the outcome of an election. The move also prompted the Justice Department official who oversees investigations of voter fraud, Richard Pilger, to step down from his post within hours.

The leadership of the Republican Party also joined Mr. Trump in refusing to concede defeat, signaling the potential for a continued struggle in the days and weeks ahead.

In his first comments since Mr. Biden was declared the winner of the election, Senator Mitch McConnell of Kentucky, the majority leader, argued that the president was “100 percent within his rights” to challenge its outcome.

Transition officials for President-elect Joseph R. Biden Jr. called on a top Trump administration appointee on Monday to end what they said was unwarranted obstruction of the money and access that federal law says must flow to the winner of a presidential election.

The officials, speaking on background to reporters on Monday night, said it was nearly unprecedented for Emily W. Murphy, the administrator of the General Services Administration, to refuse to issue a letter of “ascertainment,” which allows Mr. Biden’s transition team to begin the transfer of power.

By law, Ms. Murphy, the head of the sprawling agency that keeps the federal government functioning, must formally recognize Mr. Biden as the incoming president for his transition to begin. It has been three days since news organizations projected that he was the winner of the election, and Ms. Murphy has still not acted.

The transition officials said her inaction was preventing Mr. Biden’s teams from moving into government offices, including secure facilities where they can discuss classified information. The teams cannot meet with their counterparts in agencies or begin background checks of cabinet nominees that require top-secret access.

A White House official pointed out, as several Trump allies have, that the transition after the 2000 presidential election was delayed by the court fight between the campaigns of Vice President Al Gore and Gov. George W. Bush of Texas over several weeks. The official said it would be strange for President Trump to send some kind of a signal to allow the transition to start while he was still engaged in court fights.

But Mr. Biden’s aides said that the dispute in 2000 involved one state with only about 500 ballots separating the winner and loser, far less than in the current contest. In every other presidential race for the past 60 years, the determination of a winner was made within 24 hours, they said — even as legal challenges and recounts continued for weeks.

WILMINGTON, Del. — With the Supreme Court set to hear oral arguments this morning on a Trump administration effort to overturn the Affordable Care Act, President-elect Joseph R. Biden Jr. plans to deliver a health care speech this afternoon focusing on the case.

The law, pushed by former President Barack Obama, provides insurance coverage for tens of millions of Americans, guaranteeing covering for pre-existing medical conditions and providing other popular provisions, including coverage for prescription drugs and visits to the emergency room.

But President Trump and Republican state officials argue that a key provision of the law — the mandate that individuals purchase insurance — is unconstitutional because Congress reduced the penalty to zero, removing the justification that it was essentially a tax. The Supreme Court had upheld that justification in 2015.

Mr. Biden made the fate of the Affordable Care Act a central part of his campaign for the White House, arguing that if Republicans succeeded in convincing the justices to declare the law unconstitutional, Mr. Trump was not prepared to offer people an alternative for coverage.

The president-elect has said he wants to strengthen the A.C.A. by offering a so-called public option, allowing people to receive coverage the way Medicare enrollees do, through a system of government-run insurance. People who would prefer to stay on private insurance would be able to do so.

In his remarks today, Mr. Biden plans to talk about “the stakes for families across the country in Texas v. California, the Trump administration’s lawsuit to overturn the Affordable Care Act, and his plan to expand access to quality, affordable health care,” according to a statement released by his transition team.

Officials said that Mr. Biden would be joined at the event by Vice President-elect Kamala Harris, who as a candidate for president had pushed for a “Medicare for all” single-payer system of government health insurance favored by liberal Democrats.

The Affordable Care Act has survived two earlier challenges in the Supreme Court. But three new justices, all Trump appointees, have joined the court since the last one. One of them, Justice Amy Coney Barrett, has been publicly critical of the earlier rulings.

Mr. Biden has yet to receive a presidential daily briefing, the compendium of the government’s latest secrets and best intelligence insights. And while no law states that Mr. Biden must receive it, previous administrations, dating to at least 1968, have authorized their elected successors to be given the briefing after clinching victory.

It was also unclear whether Mr. Biden’s team would have access to classified information, the most important pipeline for them to learn about the threats facing the United States.

Like previous presidents-elect, Mr. Biden is receiving Secret Service protection, and a no-fly zone has been established over his home in Delaware. But if Mr. Trump’s administration continues its refusal to recognize Mr. Biden as the winner, it could complicate his security until his inauguration.

Former agency officials say the Secret Service is highly unlikely to begin that transition unless the G.S.A. has authorized it.

A Trump loyalist has been appointed as the top lawyer at the National Security Agency, a sign that the administration is trying to help its political appointees land career posts that they can stay in even after a new president is sworn in, American officials said.

The appointee, Michael Ellis, had served as a National Security Council lawyer and most recently as its senior director for intelligence. Formerly a lawyer for the Republicans on the House Intelligence Committee, he gained notoriety as one of two White House aides who helped his previous boss, Representative Devin Nunes, gain access to intelligence reports in early 2017 to advance President Trump’s political goals.

Mr. Ellis’s appointment was reported earlier by The Washington Post.

The two other finalists were the current acting National Security Agency general counsel, Teisha M. Anthony, and the acting general counsel of the Office of the Director of National Intelligence, Brad Brooker.

The position has been vacant since the previous general counsel, Glenn S. Gerstell, stepped down in February. The post is traditionally apolitical; the National Security Agency fiercely guards its reputation of being outside politics, and it is not clear how well a partisan lawyer will sit with the staff.

The general counsel job is a Civil Service post, and it would be difficult for President-Elect Joseph R. Biden Jr.’s administration to remove Mr. Ellis. However, Mr. Ellis could be reassigned to another legal job in the military.

In the summer of 2019, Mr. Ellis was a deputy to John A. Eisenberg, the National Security Council legal adviser. As White House officials raised concerns about the shadow Ukraine policy run by Rudolph W. Giuliani, Mr. Eisenberg regularly consulted Mr. Ellis about what to do.

President Trump’s iron grip on his party has inspired love for him among some Republican lawmakers and fear among others. Neither group will tell him it is time to concede his loss — or at the very least, to stop spreading claims about the integrity of the nation’s elections that are contrary to considerable evidence.

The dynamic helps explain why, days after Joseph R. Biden Jr. was declared the winner of the election, even Senator Mitch McConnell of Kentucky, the majority leader, was unwilling to recognize the result. Instead, senators have tiptoed around — or in some cases blindly run past — the reality of Mr. Trump’s loss, and the lack of evidence to suggest widespread election fraud or improprieties that could reverse that result.

By Monday evening, only a few Republican senators known for their distaste for Mr. Trump — Mitt Romney of Utah, Ben Sasse of Nebraska, Susan Collins of Maine and Lisa Murkowski of Alaska — had acknowledged Mr. Biden’s victory.

The Republican House leader, Representative Kevin McCarthy of California, insisted that Mr. Trump was right to contest the results of the election.

“Every legal challenge must be heard,” Mr. McCarthy said. “Then and only then does America decide who won the race.”

Thirty-one former Republican members of Congress — many of them outspoken critics of the president — on Monday denounced Mr. Trump’s allegations in an open letter that called on him to accept the election results.

President Trump is planning to form a so-called leadership political action committee, a federal fund-raising vehicle that will potentially let him retain his hold on the Republican Party even when he is out of office, officials said Monday.

The announcement is expected as soon as this week, just days after the major news networks and newspapers, as well as The Associated Press, called the 2020 election for former Vice President Joseph R. Biden Jr.

The PAC would almost certainly be a vehicle by which Mr. Trump could retain influence in a party that has been remade largely in his image over the past four years.

Such committees can accept donations of up to $5,000 per donor per year — far less than the limits for the committees formed by Mr. Trump’s campaign and the Republican National Committee.