For families across the country, separated by lockdown, it’s the little things that make such a difference at the moment.

And it’s clear just what a home-made gift means to the Queen and the Duke of Edinburgh.

This beautiful image, shared by Buckingham Palace today to mark their 73rd wedding anniversary, shows the couple looking proudly at card made for them by the Duke and Duchess of Cambridge’s three children.

Prince George, seven, Princess Charlotte, five, and even two-year-old Prince Louis spent hours creating the the colourful greeting, carefully colouring in a large number 73 on the front and decorating it with spots of red, blue, yellow, green and purple.

The monarch, 94, and the Duke of Edinburgh, 99, admired the colourful creation from Prince George, seven, Princess Charlotte, five, and Prince Louis, two, alongside other cards and letters sent by well-wishers in a new official photograph to mark their 73rd wedding anniversary on Friday 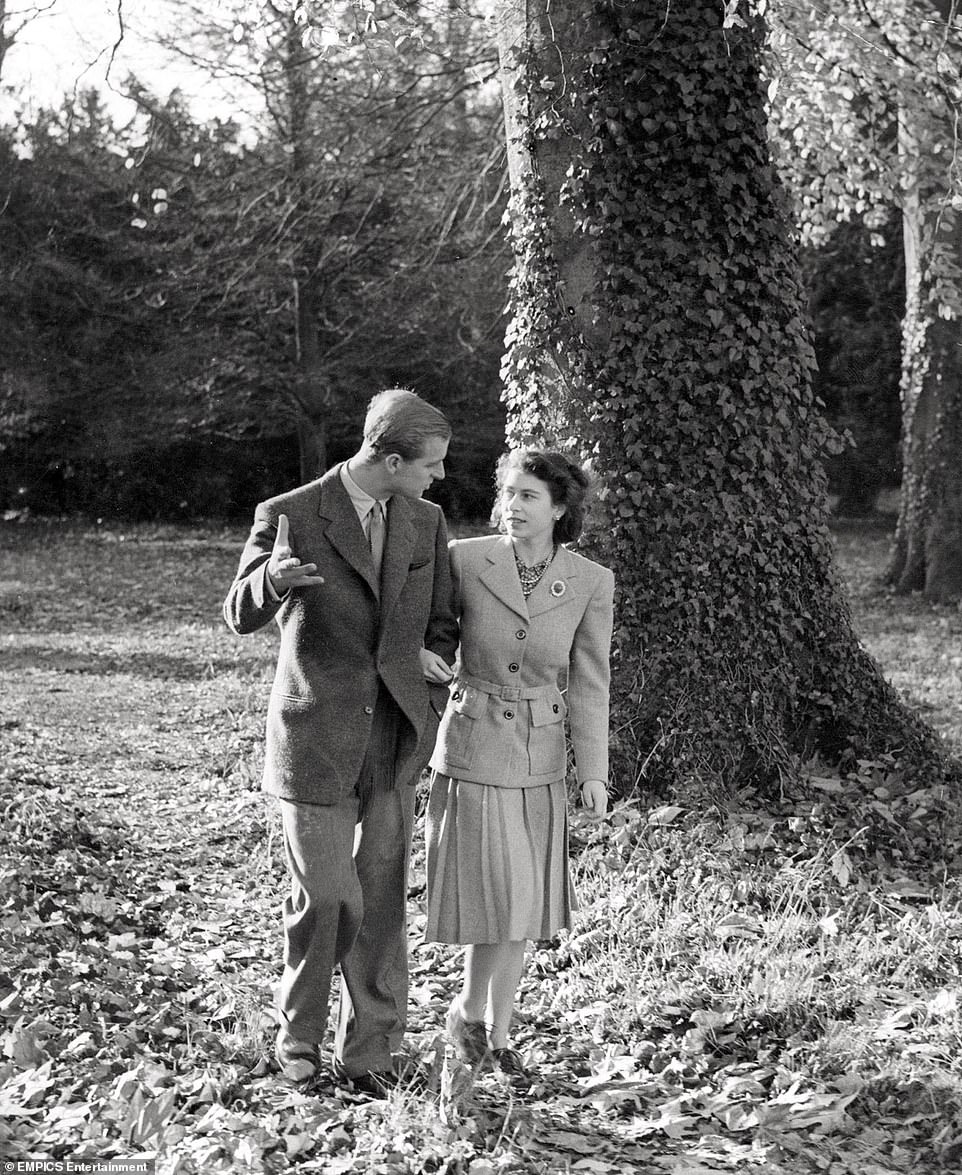 Princess Elizabeth (later to become Queen Elizabeth ll) and Prince Philip, Duke of Edinburgh walking in the grounds of Broadlands, the home of the Duke’s uncle, Earl Mountbatten, on their honeymoon, November 1947. The Queen is wearing a Chrysanthemum Brooch in the picture, which she also wore in the new image today

You can almost imagine them, tongues stuck out in concentration, sitting around the kitchen table at Kensington Palace trying their best not to ‘go over the lines’.

The youngsters haven’t been able to see their great-grandparents for several weeks but the card was dutifully taken over to Windsor Castle, where the Queen and Philip are currently in residence together, earlier this week by the royal postal service.

And when they opened it, the joy the thoughtful gift brought them was clear to see.

The picture was taken by Getty Images’ royal photographer, Chris Jackson, in the Oak Room at the royal residence and shows a picture of cosy domesticity that the public so rarely get to see. 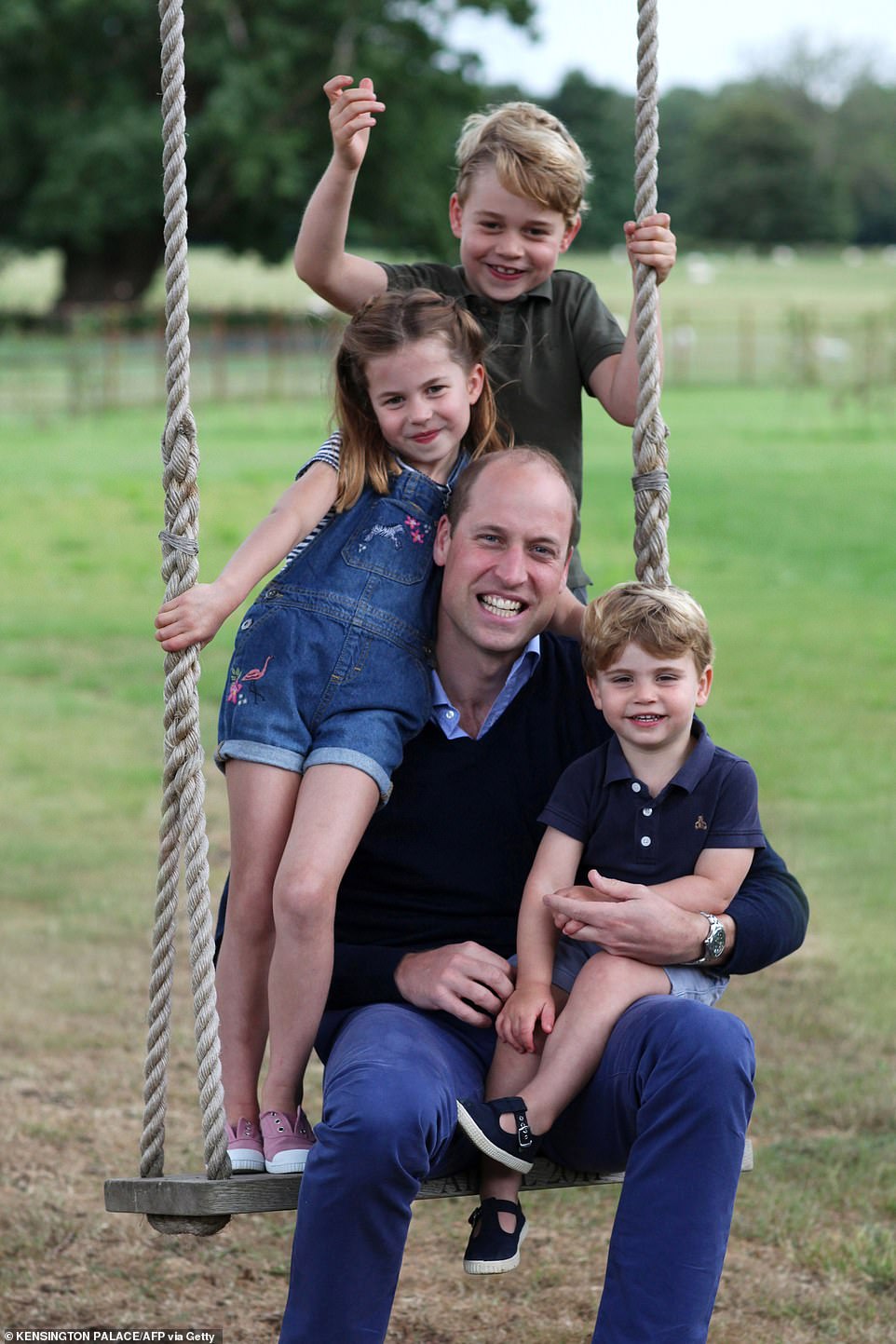 The youngsters haven’t been able to see their great-grandparents for several weeks but the card was dutifully taken over to Windsor Castle, where the Queen and Philip are currently in residence together, earlier this week by the royal postal service. Pictured is Prince George, seven, (back ) Princess Charlotte, five, (second back, standing), Prince William and Prince Louis, two (front) 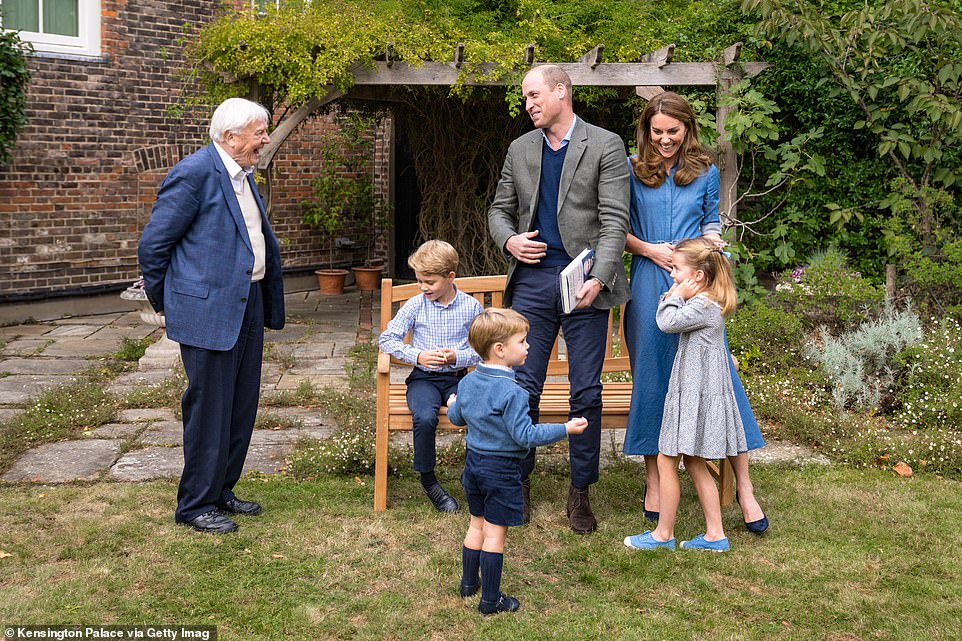 Their sofa is comfy rather than grand, littered with cream and red cushions to compliment the gold tasselled curtains pulled back to show a sweeping view of the castle vista.

On the low, glass-topped table in front of them is an array of cards and letters sent by well-wishers to congratulate them on reaching such a remarkable milestone. 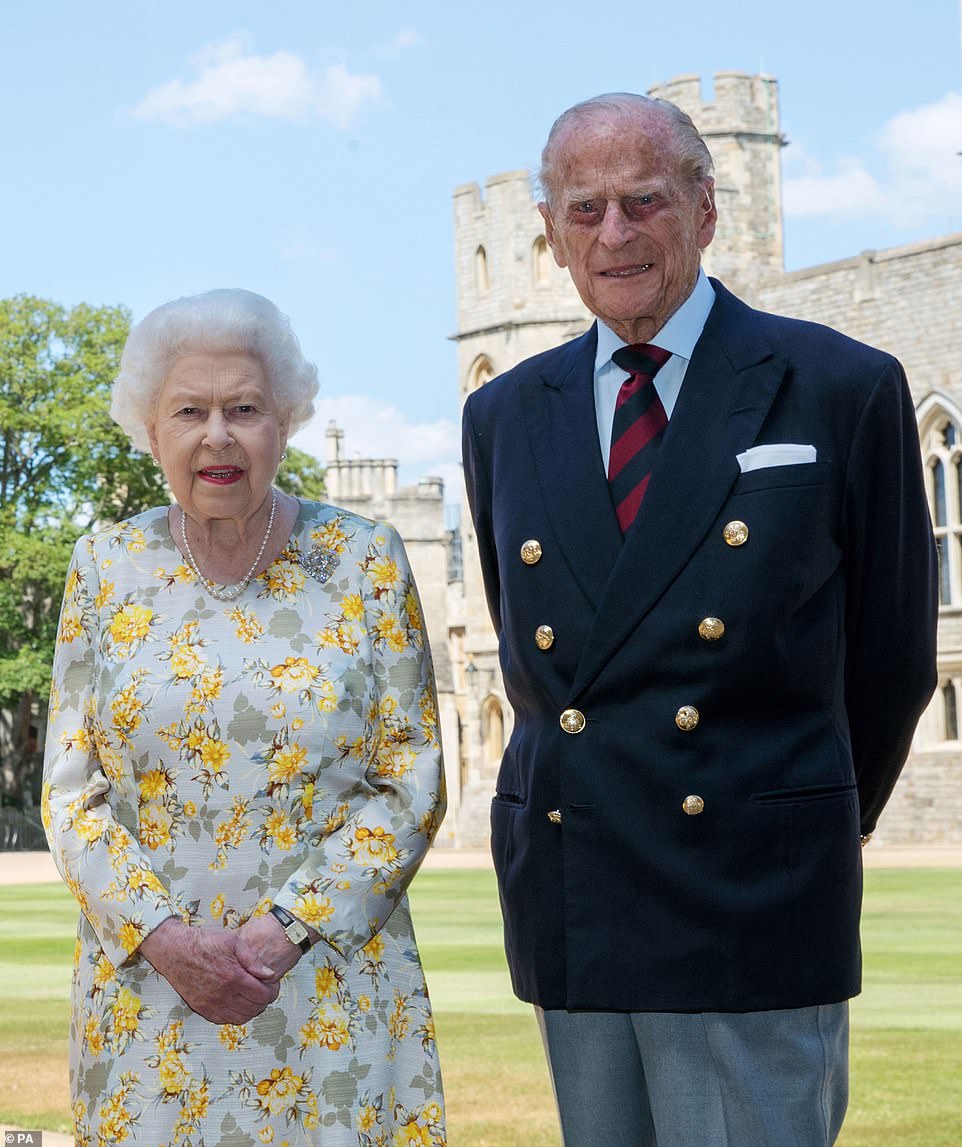 The last official photograph shared of the Queen and the Duke of Edinburgh was released on June 1 earlier this year, also taken in Windsor Castle 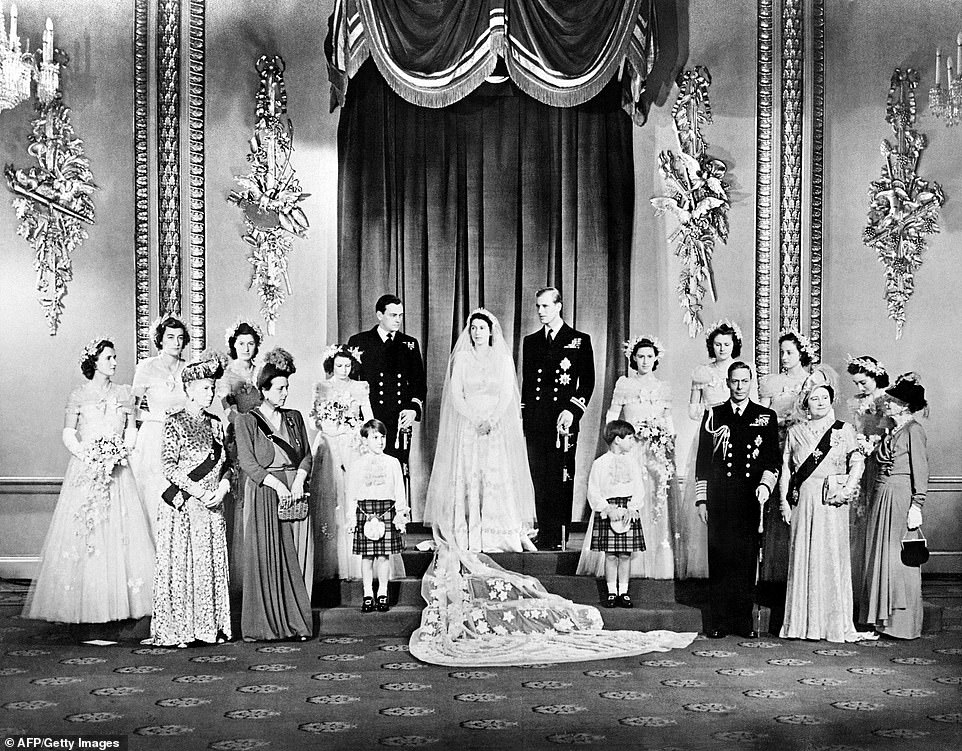 The Queen and Prince Philip wed in 1947 in a splendid ceremony at Westminster Abbey, marked with an unforgettable photoshoot in the opulent environs of Buckingham Palace 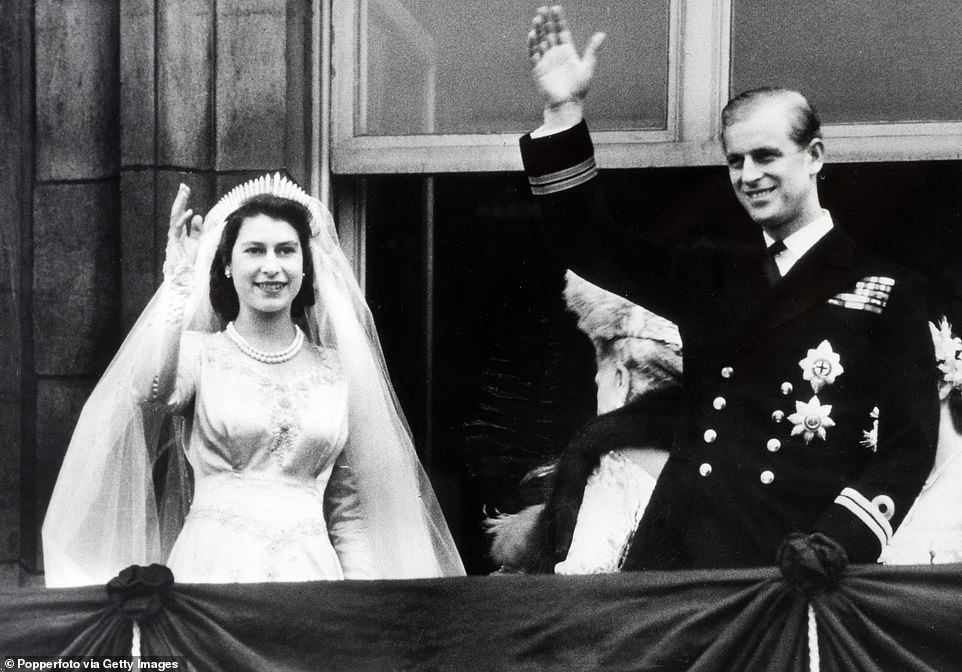 The engagement of the cousins was officially announced on July 9, 1947 and the wedding took place just four months later on November 20, 1947 at Westminster Abbey. Pictured waving as newlyweds from Buckingham Palace 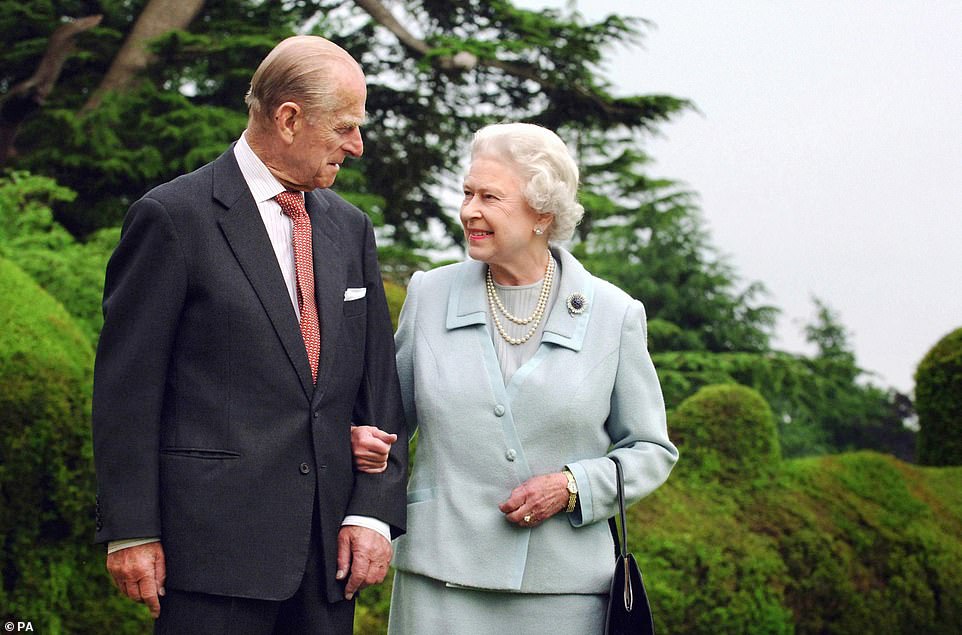 Three years ago the Queen and Prince Philip celebrated their platinum wedding anniversary (pictured at the time at Broadlands, where the royal couple spent part of their honeymoon), throwing a black-tie party for 100 friends and family at Windsor Castle

The Queen and Prince Philip wed in 1947 in a splendid ceremony at Westminster Abbey, marked with an unforgettable photoshoot in the opulent environs of Buckingham Palace.

Princess Elizabeth and Philip first met in 1934 at the wedding of Princess Marina of Greece and Denmark and Prince George, the Duke of Kent, and fell in love five years later, at a pivotal meeting at the Royal Naval College in Dartmouth, Devon when King George VI and Queen Elizabeth visited with their two daughters.

Prince Philip entertained his future wife by jumping over the tennis nets.

The king’s official biographer, Sir John Wheeler-Bennett, recalled: ‘This was the man with whom Princess Elizabeth had been in love from their first meeting.’

The engagement of the cousins was officially announced on July 9, 1947 and the wedding took place just four months later on November 20, 1947 at Westminster Abbey.

Princess Elizabeth, the future Queen was the 10th member of the Royal Family to be married at Westminster Abbey.

Elizabeth wore an ivory silk Norman Hartnell gown that was decorated with 10,000 seed pearls, glittering crystals and an intricate 13ft (4m) star-patterned train. The design for the dress was only approved less than three months before the day.

Prince Philip became the Duke of Edinburgh before the wedding.

Five years into their marriage, Elizabeth became the Queen of England.

Together, the couple celebrated the Queen’s Silver, Golden and Diamond Jubilees and faced the highs and lows of life.

The duke added: ‘It may not be quite so important when things are going well, but it is absolutely vital when the going gets difficult.’

‘You can take it from me that the Queen has the quality of tolerance in abundance.’

Three years ago the Queen and Prince Philip celebrated their platinum wedding anniversary, throwing a black-tie party for 100 friends and family at Windsor Castle.

He is smartly dressed in grey pressed trousers and a blazer jacket with pocket handkerchief. The elderly royal is also sporting a Royal Navy blue and burgundy stripped tie, with the only hint of his advancing years a discreet hearing aid in his ear.

The Queen, 94, is, as usual, immaculate in a pale blue double wool crepe dress by Stewart Parvin, and a piece of jewellery with meaning for the occasion, the Chrysanthemum Brooch.

The sapphire and diamond piece, set in platinum, was worn by the then Princess Elizabeth, in images taken on her honeymoon at Broadlands in Hampshire in 1947.

She also wore it in images taken to mark her and the Duke’s 60th wedding anniversary in 2007.

Her Majesty has also worn it during other significant events in her life, both professional and personal, including in 1950 for a portrait with Prince Philip, Prince Charles, and a baby Princess Anne.

Seventy three years is a milestone by any standards – but when it marks the longevity of a marriage, it is something truly special.

The duke, always protective, understands that his wife is a head of state and has duties which need to take priority in their life.

But at home it is he who wears the trousers.

And while some find it strange that they do not live together for long periods of time – since he retired in 2017 Philip has largely lived at Wood Farm on his wife’s private Sandringham Estate, with the Queen at Windsor – it is an arrangement that, importantly, has worked for for them.

Ironically two national lockdowns this year, both of which have seen them isolating at Windsor together, has ensured they have spent more time under the same roof than they have in decades.

Today their celebrations will be simple – dinner together, perhaps a walk in the grounds. The Queen was seen out riding yesterday (sans mask) for the first time in weeks.

But after more then seven decades of marriage, it’s the fact that they are simply together that matters most.

Facebook turns WhatsApp into a shopping hub with virtual storefronts