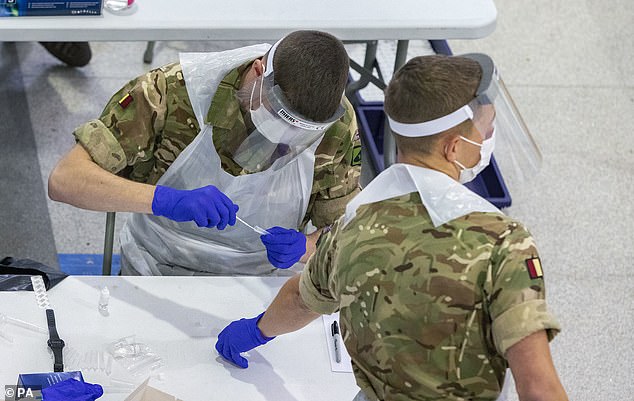 Rapid Covid tests being used to pilot Operation Moonshot in Liverpool could allow Britain to return to as close to normality as possible, health chiefs said today.

Evaluation of the test produced by Innova — which is now being used for the first phase of mass-testing in England  — showed that it is ‘accurate and reliable’.

The Department of Health published the results of testing by Oxford University and Public Health England scientists, who said the 20-minute tests pick up a majority of people infected with Covid-19 and produce tiny numbers of false positives.

Experts claimed the tests would help to detect ‘large numbers’ of hidden infections because they work just as well on people without symptoms. Results showed they could correctly detect 77 per cent of infected people.

And they were found to be 99.7 per cent specific, meaning they should only produce three false positive results for every 1,000 people who take the test.

Out of 50 different commercially available rapid tests only six have made it through to the final round of PHE’s tests, the government body said.

Rapid testing for people with no signs of illness began in Liverpool last week. Some 40,000 people out of 500,000 living in the city have taken up the offer so far.

Prime Minister Boris Johnson has set ambitions for the country to carry out 10million tests per day next year across the country and officials say rapid tests could be used as a way to reopen places like theatres and sport stadiums, turning away people who test positive at the gate.

The rapid tests are not robust enough to work well if carried out by members of the public so are being administered by trained military personnel in Liverpool (Pictured: Soldiers man a testing centre at St Johns Market in Liverpool)

‘The data in this validation report demonstrates that these inexpensive, easy to use tests can play a major role in our fight against Covid-19,’ said Sir John Bell, a medicine professor at the University of Oxford and testing adviser to the Government.

Sir John worked alongside scientists at PHE’s Porton Down lab to evaluate the tests.

‘They identify those who are likely to spread the disease and when used systematically in mass testing could reduce transmissions by 90 per cent,’ he said.

‘They will be detecting disease in large numbers of people who have never previously even received a test.’

The benefit of the test, officials say, is that it works equally well on people who don’t have symptoms of coronavirus so wouldn’t be eligible for a proper swab test.

If the tests can be rolled out across the country and used regularly by the public they might prevent people from spreading the disease without knowing.

Results suggest that they would still miss nearly a quarter of those positive results, however, and wrongly diagnose three people in every thousand as positive.

The tests are only suitable for use by trained professionals and the accuracy of them gets considerably worse if members of the public do them themselves – to around 58 per cent accurate at detecting positive cases.

Accuracy also plummets among people with only small amounts of virus in their body, studies found, getting more accurate as people’s viral loads increased.

Department of Health sources said this was unlikely to present a major problem because people with the smallest viral loads were less likely to transmit the virus.

The tests were evaluated in lab conditions and also in real-world testing centres.

Real-world tests found that the vast majority of people coming forward had viral loads that lined up with the test’s most accurate phase.

The test detected 95 per cent or more of 180 people who tested positive through gold-standard PCR testing with relatively large amounts of virus in their bodies, while it detected only 10 per cent of the 30 people with low levels of virus.

Officials said the time frame of infection that this test could detect was considerably smaller than a PCR test, which is more than 95 per cent accurate in ideal conditions.

While that test can detect signs of illness dating back 10 days or more, this one is likely only to work until around five days after infection.

A benefit of this, they said, would be that it won’t pick up on people who were recovering from the illness and therefore less likely to be infectious.

Dr Susan Hopkins, chief medical adviser to NHS Test and Trace, said: ‘These tests are proving to be accurate and reliable.

‘And, importantly they’re able to detect Covid-19 in people without symptoms who could unknowingly be passing the virus onto others.

‘Our evaluation work and the ongoing pilots are helping us to understand how lateral flow tests work in the field and how we may use them to help stop the spread of the virus.

‘We are confident that these new tests, which have been rigorously evaluated, will make a real difference in how we protect people from this disease and help break chains of transmission.’

‘It is right we’ve taken a dual-track approach to evaluating this technology – by piloting them in the field so we can understand how to best to make these tests available, and by getting our world-leading academics and clinicians to undertake rigorous evaluation of their ability to detect the virus.

‘I’m delighted that both are already demonstrating that lateral flow tests can be the reliable, highly sensitive technology we need to help get this virus under control, and return to as close to normality as possible.’