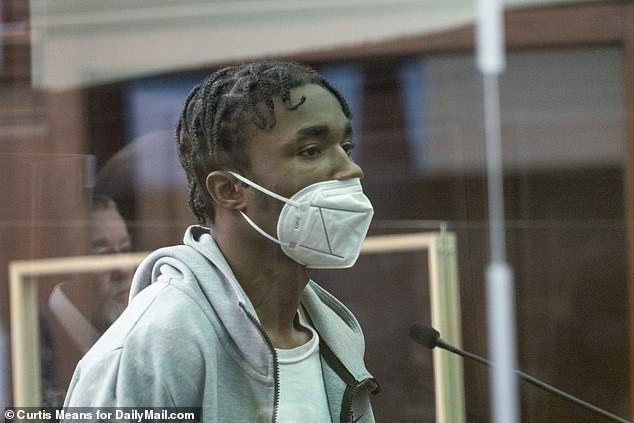 A New York City rapper who fired off four shots at a motorcyclist in Times Square early on Wednesday was out on bail for illegal weapons possession charges at the time of the road rage incident, it has been reported.

Elijah Quamina, 20, allegedly shot at the biker around 12:40 a.m. near 7th Ave. and 41st St. in Midtown and was arrested on Thursday, police said. Nobody was injured in the shooting.

Quamina pleaded not guilty to charges of attempted murder, attempted assault and criminal possession of a weapon while appearing in Manhattan Criminal Court on Friday, the New York Daily News reported.

The rapper, who recently signed a deal with RCA Records under the name Eli Fross, claimed he accidentally clipped a motorcyclist, 32, with his Mercedes when a friend of the biker, 22, shot at him and he returned fire in self-defense, the outlet reported.

Elijah Quamina, 20, allegedly shot at the biker around 12:40 a.m. near 7th Ave. and 41st St. in Midtown and was arrested on Thursday 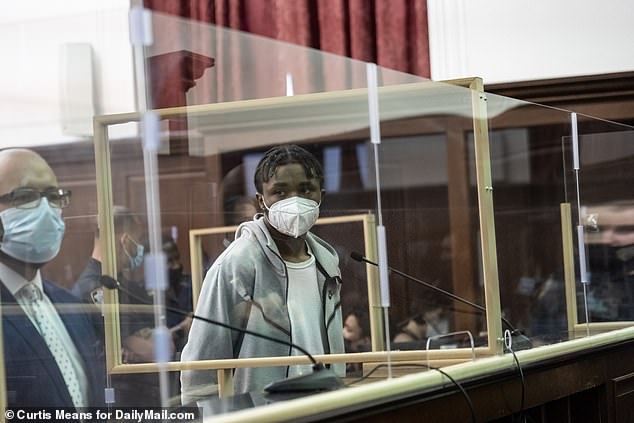 Quamina pleaded not guilty to charges of attempted murder, attempted assault and criminal possession of a weapon 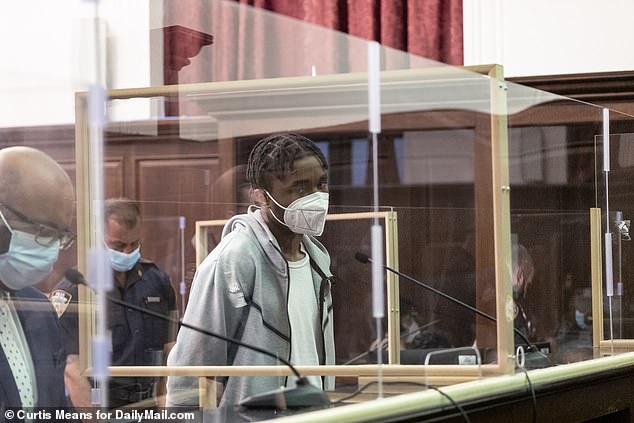 He appeared in Manhattan Criminal Court on Friday and was released on $100,000 cash bail hours after his label would get him out of jail 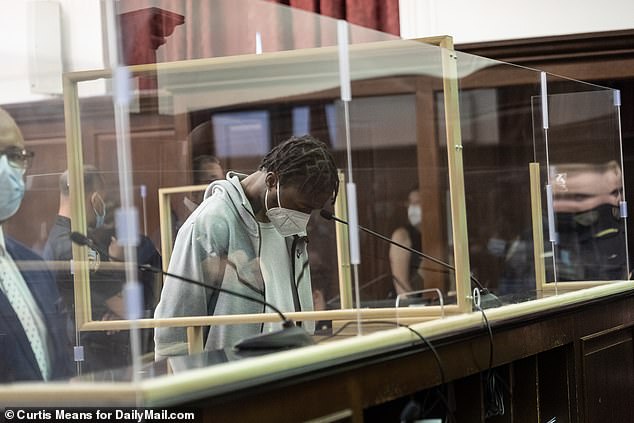 The rapper claimed he accidentally clipped a motorcyclist, 32, with his Mercedes when a friend of the biker, 22, shot at him and he returned fire in self-defense 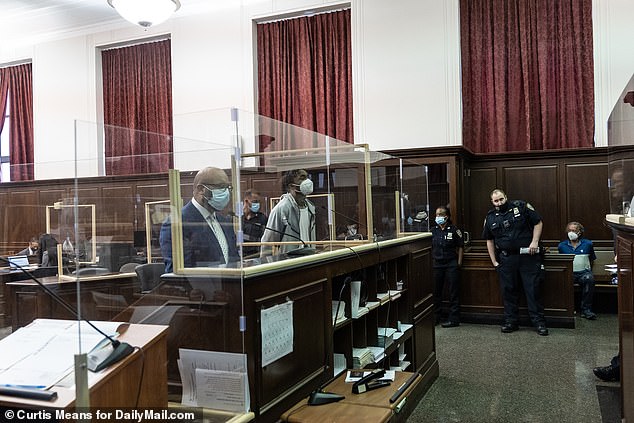 Cops told the Daily News that the biker’s friend confronted a group of men standing by the Mercedes when someone in the group started firing. The Mercedes then sped off as the alleged shooter fled on foot.

An NYPD spokesperson told DailyMail.com in a statement that the 22-year-old man has filed a police report for attempted assault.

Quamina was released on $100,000 cash bail hours after bragging RCA, which is owned by Sony Music Entertainment, would get him out of jail, the Daily News reported.

Police previously arrested Quamina on May 29 in the Kensington neighborhood of Brooklyn when he was found with a loaded handgun with a defaced serial number, the New York Daily News reported – citing a complaint the outlet obtained.

According to the New York Post, Quamina was also arrested on gun-possession charges in May 2020 and had been out on a $7,500 bail.

‘While out on bail with gun charges, this defendant fired a gun, shooting several rounds of ammunition at a complete stranger in Times Square, after he was involved in a traffic collision,’ a prosecutor said.

David Adhami, Quamina’s lawyer, said during his hearing on Friday that he has no prior convictions, the outlet reported.

Quamina, who grew up in the Prospect Heights neighborhood of Brooklyn, always wanted to become a rapper, a former neighbor told the Daily News.

‘When he became a rapper, I thought it matured him,’ the former neighbor said. ‘But I guess not.’

DailyMail.com has reached out to RCA Records for more information about his relationship with the label and additional comment. 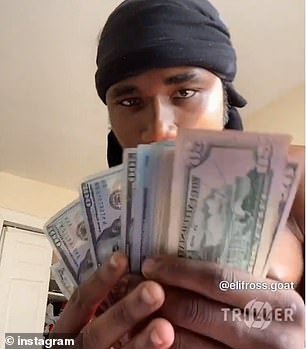 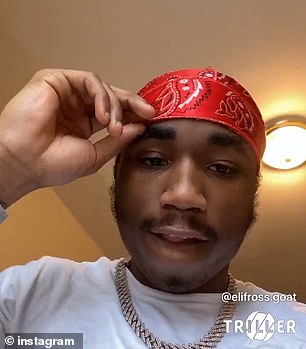 Quamina, who goes by the name Eli Fross professionally, is pictured holding a stack of money in pictures posted to his Instagram. Quamina, who has a verified account on the platform, has more than 119,000 followers

In November, WorldStarHipHop released a music video for Quamina’s song GOAT Freestyle stylized after a Black Lives Matter protest in which he burns an American flag while standing on a police car. The video has been viewed 1.2 million times.

The shooting incident marks the third time shots have rung out in Times Square since May 8 when two adults and a four-year-old girl named Skye Martinez were hit with stray bullets.

Farrakhan Muhammad, the alleged gunman in that shooting, had reportedly started shooting over a street vendor ‘turf war.’ He allegedly fled the Big Apple after the shooting and was arrested days later in Florida.

Then a U.S. Marine was injured in another shooting on June 27 when he was hit by a ricocheting bullet at W. 45th St. and Seventh Ave., police said. 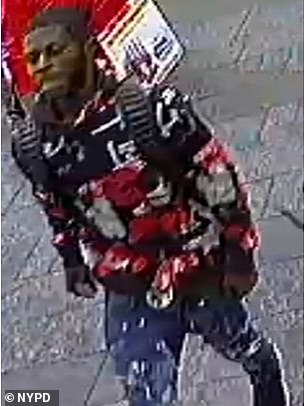 Avon Darden, 16, handed himself over to cops at the Midtown South Precinct station house on Wednesday a whopping ten days after the shooting. He is pictured in surveillance footage while cops searched for him 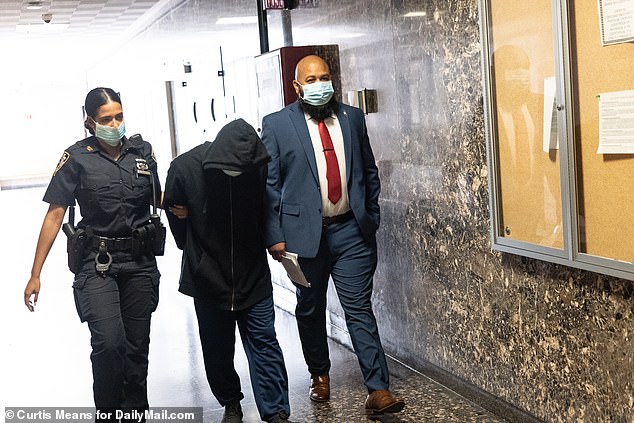 Darden reportedly has been arrested for three felonies 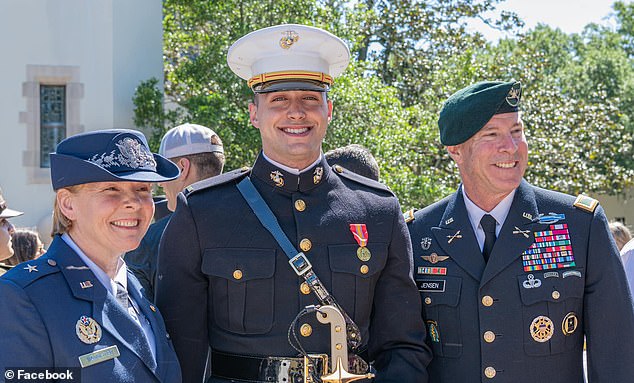 Samuel Poulin, 21, was hit in the back by a ricocheting bullet as he walked with his family near the Marriott Hotel on W. 45th St. around 5:15 p.m. on June 27

A breakdancer, 16-year-old Avon Darden, had allegedly tried to shoot a rival dancer when he hit Samuel Poulin, 21, in the back as he and his wife and family walked past.

The teen later handed himself over to cops at the Midtown South precinct station house accompanied by his mother.

Crime, particularly in the Bronx borough of New York City, has risen drastically when compared to last year.

NYPD Commissioner Dermot Shea told NY1 on Wednesday that the Bronx has not had such high gun violence rates since the mid-1990s.

‘The Bronx is back to a level not seen since 1996,’ Commissioner Shea said.

He added: ‘We’ve had a bad run right now in the Bronx, specifically with gang violence involving young kids.’

NYPD data shows that murder rates are up 4.7% in 2021 compared to last year as of July 11. There have been 225 murders citywide this year compared to 215 last year.

However, those rates are much starker when examined just for the Bronx borough of New York City.

Bootleg Fire largest wildfire in the US, is growing at 1,000 acres every hour with giant fire clouds

Windows 11 is moving to a yearly update model