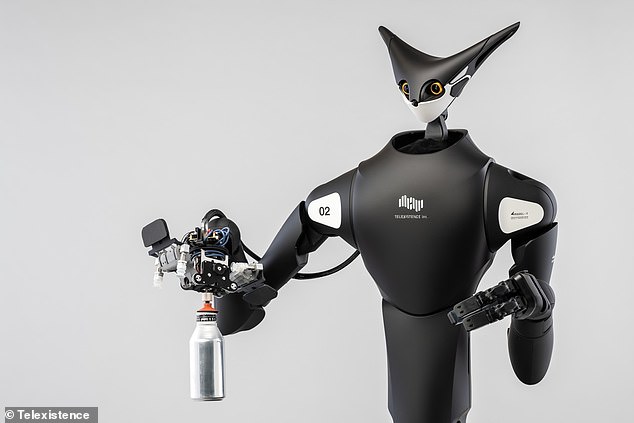 Japanese convenience stores are testing out robots to stock store shelves in hopes of combating the country’s labor shortage and allowing human workers to socially distance during a pandemic.

Rather than use AI, Model-T is connected to a human operator who manipulates the robot’s movements remotely using virtual reality (VR).

The seven-foot tall robot has a wide range of motion, necessary for lifting and moving products, with a lag time of only 50 milliseconds between operator and automaton.

This week Model-T was rolled out at Lawson, another convenience store that is a subsidiary of Mitsubishi.

Model T, a robot designed to stock shelves, is being tested out at FamilyMart and Lawson convenience stores in Tokyo. It’s operated remotely by a human using a virtual reality console

In FamilyMart’s pilot program, an operator logs into a VR terminal from Telexistence’s office in Toranomon, Tokyo, and remotely operates a  Model-T installed at a store five miles away in the Toshima Ecomusee Town building.

While Model-T doesn’t move very fast, or remove the need for human employees altogether, one operator could theoretically govern the movements of multiple robots in a number stores with the same layout and inventory.

For now, Model-T will restock plastic beverage bottles from the back of the store, which makes up a relatively large portion of the workload.

Once its speed and accuracy are verified, Model-T will start handling other popular items, like rice balls, sandwiches and bento boxes.

FamilyMart says it hopes to deploy the Model-T in up to 20 stores by 2022, with the goal of eventually being in every location.

‘By introducing Model-T into stores, FamilyMart store staff will be able to work in multiple stores from a remote location, which will help solve challenges around labor shortage and help create new job opportunities,’ the company said in a statement. 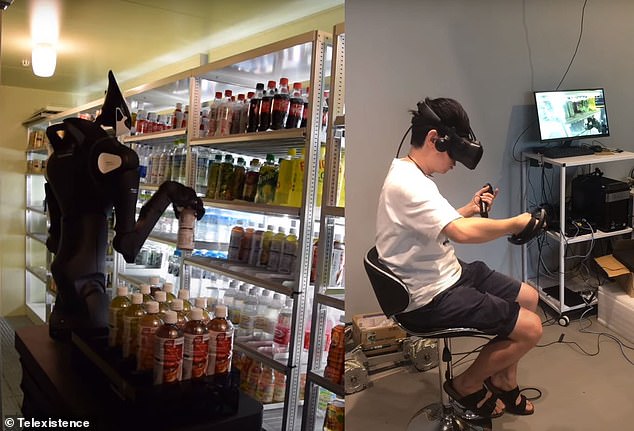 A human operator uses Model T to restocks soda bottles at the FamilyMart in the Toshima Ecomusee Town building five miles away. The chain hopes to have robots in 20 locations by 2022

‘It will also lead to the reduction of human-to-human contact to help prevent the spread of COVID-19.’

Japan has faced a critical shortage of labor for years, due to its low birth rate and rapidly aging society.

The population is expected to decline from about 127 million to about 88 million by 2065, according to the National Institute of Population and Social Security

Other Asian countries have upped the ante on robots, as well.

In Seoul, South Korea, robots at No Brand Burger take orders, prepare food and bring meals out to customers.

At Foodom in Guangzhou, China, robot waiters greet customers and guide them to their seats, recommend specials and take orders.

Robots cook the food, as well, which is delivered via conveyor belt.

FamilyMart was early to adopt automation – it tested out self checkout in 2006, long before it became commonplace in the West.

There are more than 24,500 FamilyMart stores across Japan, China, Taiwan, the Philippines, Thailand, Vietnam, Indonesia and Malaysia.