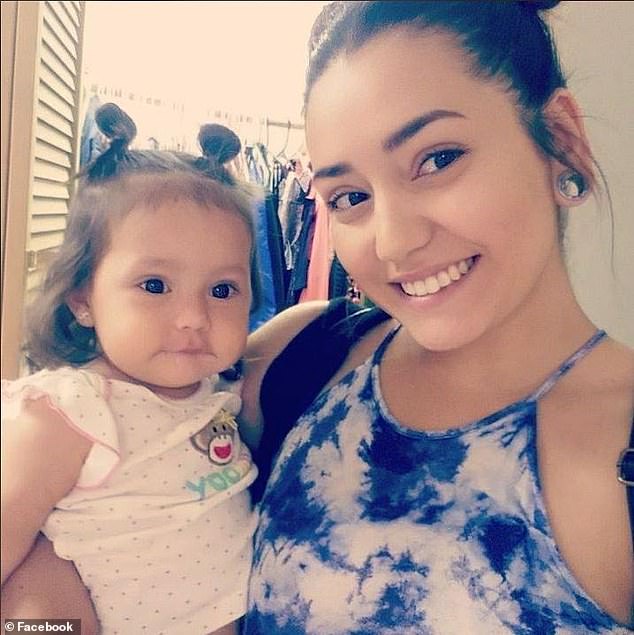 A single mother working at a sport’s bar was fired for posting a video of Nebraska Gov. Pete Ricketts maskless amid the coronavirus pandemic and dining with a group on Election Night.

Karina Montanez, of Omaha, Nebraska, was working her shift at DJ Dugout when she spotted a maskless Gov. Ricketts laughing and conversing with at least seven women.

The 25-year-old mother told The Daily Beast that only one person was wearing a face mask, and it wasn’t Ricketts, who reportedly talked and took photos with other un-maksed patrons.

‘I don’t understand why it’s so hard for him to understand what he’s doing is hypocrisy and puts everyone at risk,’ she told Daily Beast.

Feeling shocked by Ricketts’ behavior, Montanez took video of the encounter on Snapchat and later shared it to her Twitter.

Karina Montanez (right), a 25-year-old mother to Mila (left), was fired from DJ Dugouts in Omaha, Nebraska, for posting a video of Gov. Pete Ricketts 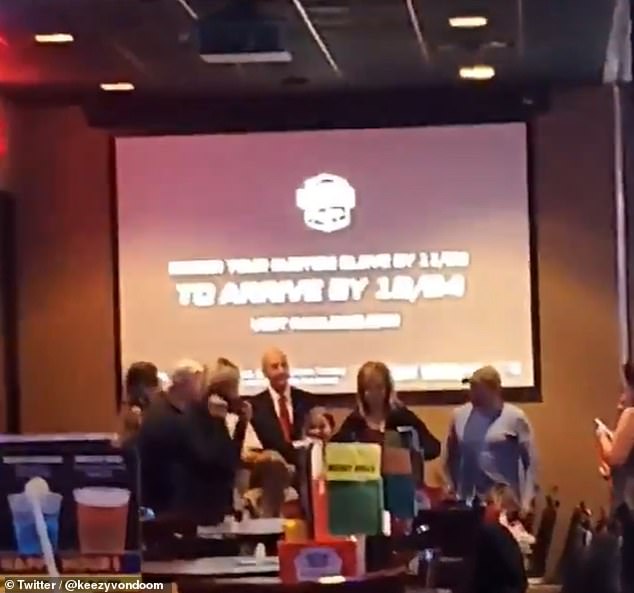 The cellphone footage shows Ricketts, donning a suit and no mask, speaking to the group of adults and small children in the back of the restaurant.

At one point, Ricketts appears to wipe his nose before taking hold of a small infant and cradling it in his arms.

The video soon went viral on social media, where critics of Ricketts blasted him over what they described as careless and reckless behavior. The governor was later forced to quarantine after being exposed at an outdoor dinner party.

‘I was completely disgusted,’ Montanez, referring to the instance with the infant, told Daily Beast. 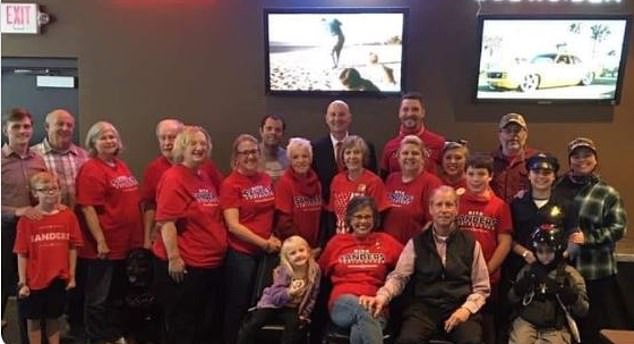 She explained to the publication that she has a medical that puts her at risk if she were to contract coronavirus.

‘So seeing Ricketts come in like he was a celebrity really rubbed me the wrong way,’ Montanez added.

But Ricketts wasn’t the only one who face consequences for the Election Night scene.

Montanez, whose held her server job of two years and takes care of her four-year-old daughter, Mila, was handed a pink slip.

‘Since i just got fired for posting this tweet, if anyone would like to donate to this lovely single mama, I’ll be posting my venmo and cashapp shortly,’ she wrote on Twitter.

Montanez told Daily Beast that DJ Dugouts was her only source of income.

Montanez revealed on Twitter that she was fired shortly after posting the video of Gov. Ricketts to social media

Despite the criticism launched at Ricketts, he did not flout the state’s restaurant and bar occupancy guidelines.

On Election Night, Nebraska allowed eateries to have 100 per cent occupancy with some social distancing and face mask restrictions.

At that time, restaurants adhered to an eight-person party limits and groups larger than that had to split into multiple tables.

Officials recommended that tables be separated by six feet. Diners were required to be seated unless going to the restroom, placing an order or playing games.

Patrons were not required to wear face masks while eating and drinking.

Based on the footage, it’s unclear how the tables were positioned or the exact party number. Ricketts appeared to flout the recommendation that guests remain seated except for certain tasks.

However, a photo shared by Democratic Sen. Megan Hunt showed Ricketts on Election Night posing with 21 adults and children. None wore a mask. 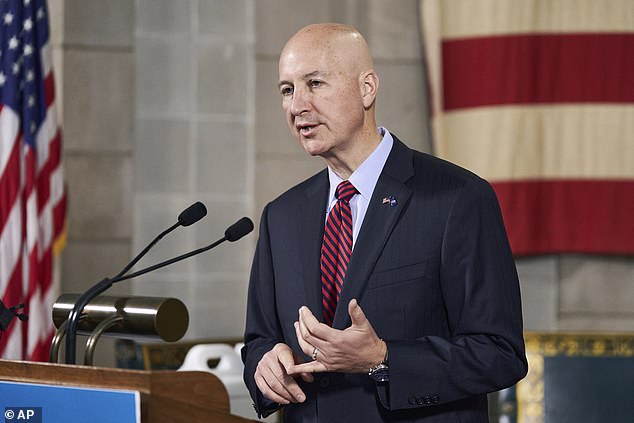 Ricketts (pictured) has noted the inscrease in hospitalizations across the state, but has not championed face masks as a vital part of prevention 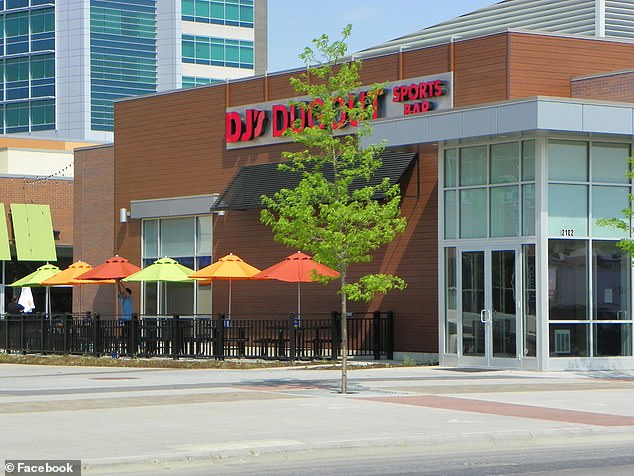 Pictured: DJ Dugouts in Omaha, Nebraska, where Ricketts was spotted without a face mask

Nebraska is among states that have experienced a concerning uptick in cases as the pandemic merges with flu season and the winter months.

The state is ranked sixth per capita for new coronavirus cases, with 101,617 infections and 826 deaths so far, according to the state’s coronavirus dashboard.

Currently, there are 961 active coronavirus hospitalizations as only 128 of 580 ICU beds are available – or 22 per cent.

The White House on Tuesday signaled Nebraska’s troubling numbers by saying the crisis ‘exponential and unyielding.’

‘COVID-19 spread in Nebraska is exponential and unyielding, with hospitalizations increasing week over week and reported limited bed availability,’ the report read.

‘Increases from the past two weeks correlate with Halloween and related activities. With Thanksgiving and upcoming holidays, Nebraskans must understand the COVID-19 situation statewide.’ 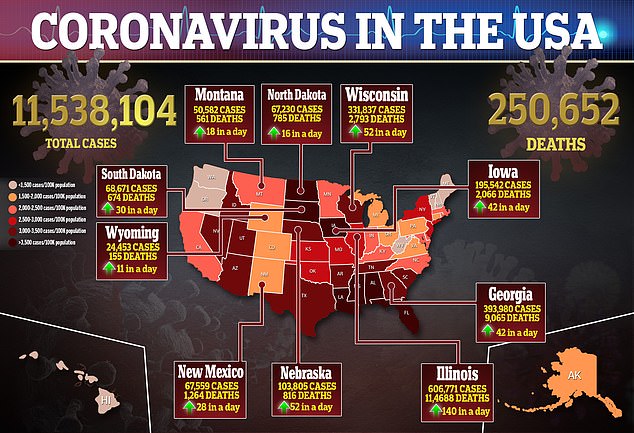 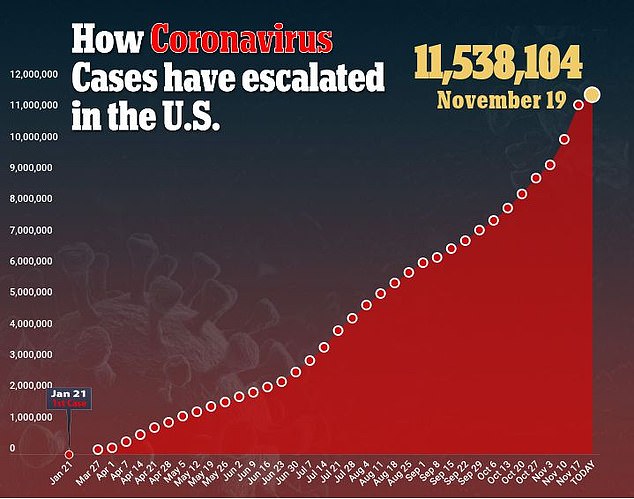 The report noted that more must be done on the part of local Nebraska officials in rallying residents.

‘Serious messaging and action are needed from state leadership; recommending Nebraskans wear masks in public settings communicates the current risk level and an action all Nebraskans need to take,’ it read.

Ricketts has echoed many of GOP colleagues by downplaying the importance of face masks during the coronavirus pandemic.

The Daily Beast reports that Ricketts disputed claims he had flouted coronavirus guidelines. 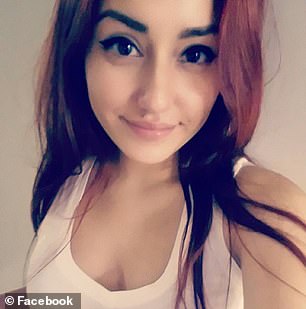 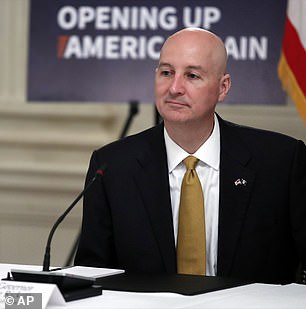 Karina Montanez: (left): ‘I actually hesitated posting it that night but went for it because of how the government, including the President, were acting towards this pandemic. People deserve to know the truth, even if it hurts one way or another.’ Left: Pete Rickettes

‘Oftentimes when I’m taking a picture depending on the preference of the person taking the picture, I’ll remove my mask to take the picture and put it back on when the picture ends,’ he said.

Ricketts had been at DJ Dugout to celebrate Sen. Rita Sanders, the newly-elected Nebraska lawmaker.

But the video shared by Montanez, Ricketts was seen standing and chatting with patrons. She told Daily Beast that was just one of several tables Ricketts stopped by that night without a mask.

‘Pete Ricketts responded to this criticism by saying that sometimes he takes his mask off for pictures “at the request of the other person.” But the video from this night doesn’t show him wearing a mask at all,’ she wrote. 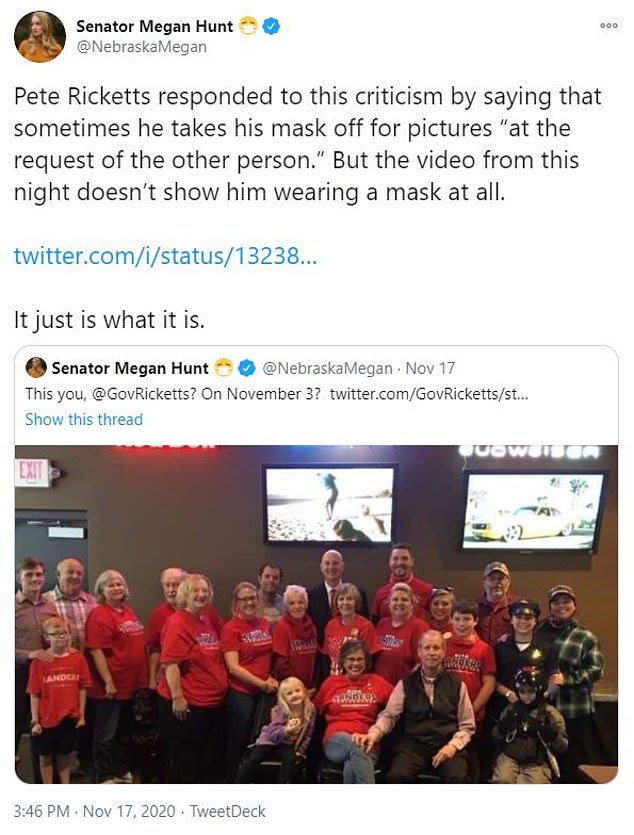 Sen. Megan Hunt: ‘Pete Ricketts responded to this criticism by saying that sometimes he takes his mask off for pictures “at the request of the other person.” But the video from this night doesn’t show him wearing a mask at all’

Ricketts on Friday issued new recommended health measures linked to the percentage of coronavirus hospital patients, which is currently 20 per cent.

Nebraska is just 200 hospitalizations away from reaching the ‘red threshold,’ which would impose further limits on bars, restaurants and other sectors.

‘Even with fear of the outcome of all this, I am glad I posted the video,’ she said.

‘I actually hesitated posting it that night but went for it because of how the government, including the President, were acting towards this pandemic. People deserve to know the truth, even if it hurts one way or another.’