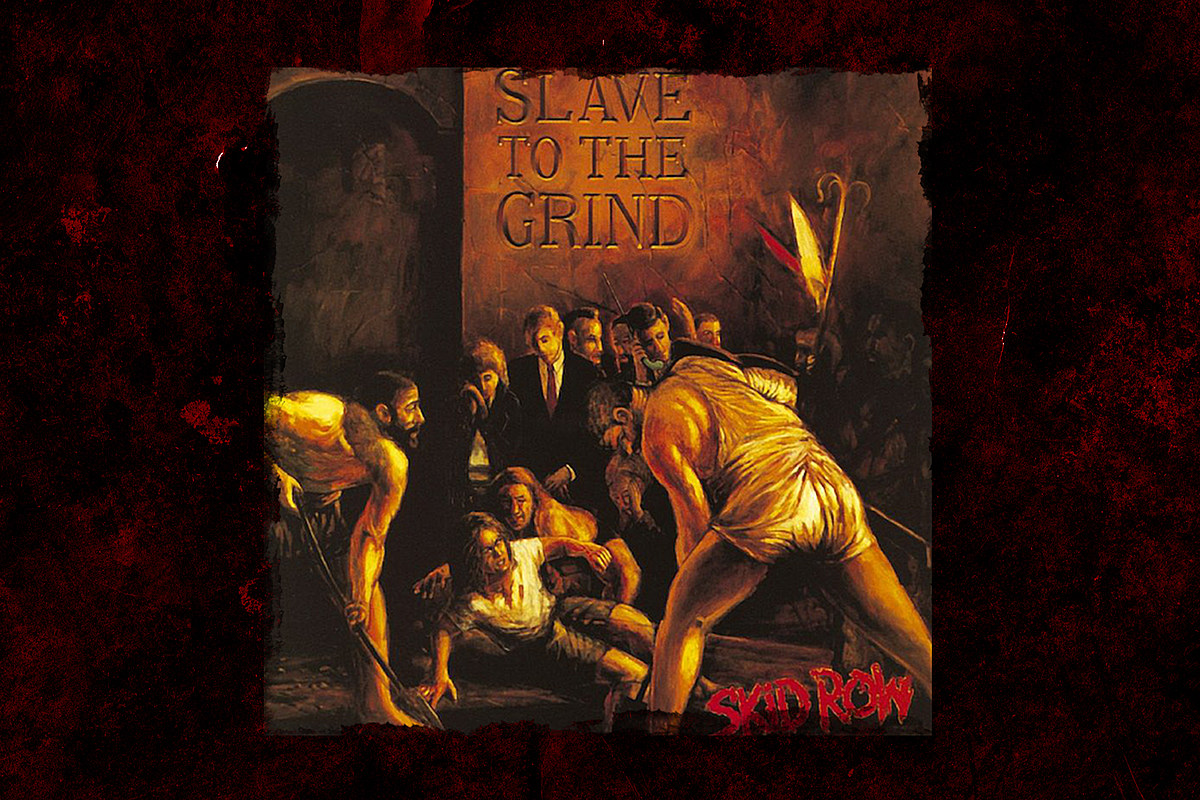 Many commercial metal bands that garnered mainstream attention in the ‘80s and ‘90s suddenly became tamer and more calculated. In addition to handlers and label executives who urged groups to tone down their sound to reach the next level of popularity (see Motley Crue, Ratt, Guns N’ Roses and Dokken for starters), musicians feeling the power of a good ballad naturally gravitated towards what was earning them hits and scoring them chicks. Perhaps sensing the dawn of a new era of music, Skid Row took the opposite route for their second album, Slave to the Grind, which came out on June 11, 1991.

The record was heavier and grittier than their 1989 self-titled debut, which included the hit singles “18 and Life,” “I Remember You” and “Youth Gone Wild.” It might have seemed like a bold, even foolhardy move since the debut disc catapulted Skid Row from the clubs to the sheds and arenas and eventually sold 5 million copies in the U.S. But the band didn’t care.

They were tired of playing it safe and wanted to return to the spotlight with fast and furious songs like the punchy “Monkey Business” and “Slave to the Grind,” which featured a riff that bordered on speed metal. Besides, frontman Sebastian Bach had proven by that time that he wasn’t just another pretty face looking for a(nother) hit music video, and that his personality was as rooted in ‘70s punk as ‘80s metal.

No one questioned Bach’s reputation as a rock and roll bad boy. He had already demonstrated his impulsiveness and volatility at a show in Springfield, Mass., opening for Aerosmith when he picked up a bottle that had been thrown onstage and winged it back into the crowd, hitting a girl who had nothing to do with the incident.

Pouring gasoline on the fire, Bach then dove into the audience and punched the dude who allegedly threw the bottle onstage. Then he fanned the flames of controversy when he was photographed wearing a shirt that read, “AIDS kills fags dead.”

During an interview with MTV news anchor Kurt Loder, Bach insisted he had no intention of offending anyone, and learned a lesson in humility when he was told by a gay friend in New York how hurt he had been when he saw Bach wearing that article of clothing.

“Everything was happening so fast and was so crazy and out of control,” Bach told me in 2013. “We just wanted some kind of change. I like to sing, and I have the voice for it, but we wanted to do something that was a little more rugged. We saw what else was happening out there. I liked Pantera. I loved Cowboys From Hell, and that’s why we invited them to tour with us when they released Vulgar Display of Power, and that’s what made them big at the time. A month into the tour, it debuted at No. 44.”

As rugged as much of Slave to the Grind was, it still featured the ballads “Quicksand Jesus,” “In a Darkened Room” and “Wasted Time.”

“I’ve always liked music that was diverse. And we wanted to take some chances maybe, but we weren’t stupid,” Bach said. “We weren’t about to turn our backs on everything that got us to where we were.”

Skid Row wrote most of Slave to the Grind in a New Jersey studio and then demoed the tracks with co-producer Michael Wagener, who had also recorded the band’s debut. One of the reasons the title track sounds so immediate is because it was tracked live in the rehearsal room before the band traveled to New River Studios in Fort Lauderdale, Fla., to track the rest of the album.

“The song ‘Slave to the Grind’ was recorded and mixed in an hour, and that’s what you’re hearing on the record,” Wagener told The Decibel Geek Podcast. “It was not even remixed. Everything is live.”

Wagener suggested some minor adjustments to other songs, but for the most part Skid Row just re-recorded their demo tracks using a state-of-the-art studio and better equipment. Even though the process went smoothly and there were many evenings the band members couldn’t remember the next day, Bach was terribly moody in the beginning of the sessions.

“I’m a miserable, rotten fucker for a lot of the time when I’m making a record,” he told me. “Then, all of a sudden when we near the end and we’ve put all of this work into it, I start hearing what I want to hear come out of the speakers. Then I go from being the most miserable prick you’ve ever met into the happiest, most energetic dude around. I transform like the fuckin’ Hulk.”

If any of Skid Row’s fans were turned away by Bach’s antics or the heaviness on the record, it didn’t have a profound effect on the band. Slave to the Grind debuted at No. 1 on the Billboard album charts, making it the first metal album to top the charts in the SoundScan era. Skid Row supported the album with the aforementioned tour with Pantera and Soundgarden, and played European dates opening for Guns N’ Roses. To date, Slave to the Grind has sold over 2 million copies.

“I’m really proud of that record,” Bach said. “I think we could remaster it and do an amazing deluxe repackaging with lots of bonus material. But right now I seem to be the only one from the band that’s interested.”

Loudwire contributor Jon Wiederhorn is the author of Raising Hell: Backstage Tales From the Lives of Metal Legends, co-author of Louder Than Hell: The Definitive Oral History of Metal, as well as the co-author of Scott Ian’s autobiography, I’m the Man: The Story of That Guy From Anthrax, and Al Jourgensen’s autobiography, Ministry: The Lost Gospels According to Al Jourgensen and the Agnostic Front book My Riot! Grit, Guts and Glory.