When ‘good’ governments – those that provided goods and services for their people and did not starkly concentrate wealth and power – fell apart, they broke down more intensely, US researchers say.

Although good governments may have been able to sustain themselves longer than corrupt regimes, they tended to suffer a more catastrophic collapse when new leaders undermined social contracts with the people.

The anthropologists examined a broad, global sample of 30 pre-modern societies, including the Roman Empire and one of its most memorable rulers, Commodus, who was more interested in chariot racing and bloodsports than ruling the empire.

Some of the autocratic, dictatorial samples in the study, meanwhile, included 14th century England and the Ottoman Empire.

The ruins of the Roman Forum, once a site of a representational government. Roman governments fell when leaders undermine social contracts

Whether societies are ruled by ruthless dictators or more well-meaning representatives, they fall apart in time – but with different degrees of severity, the team point out in their study, published in Frontiers in Political Science.

‘Our findings provide insights that should be of value in the present,’ said lead author Professor Richard Blanton at Purdue University in Indiana.

‘Most notably, societies, even ones that are well governed, prosperous, and highly regarded by most citizens, are fragile human constructs that can fail.

‘In the cases we address, calamity could very likely have been avoided, yet, citizens and state-builders too willingly assumed that their leadership will feel an obligation to do as expected for the benefit of society.’

The team looked in the greatest detail at the governments of ‘good’ four societies – the Roman Empire, China’s Ming Dynasty, India’s Mughal Empire, and the Venetian Republic.

They also had comparatively more equal distributions of power and wealth than many of the other cases examined.

In China’s Ming dynasty, for example, political reforms were put in place beginning in the late fourteenth century by its founder to enhance the state’s ability to serve the general good of society. 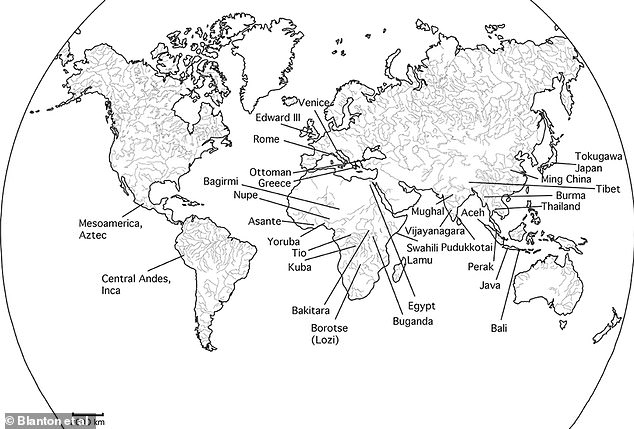 However, the four examples looked different from what are considered ‘good governments’ today as they did not have popular elections.

‘They didn’t have elections, but they had other checks and balances on the concentration of personal power and wealth by a few individuals.

‘They all had means to enhance social well-being, provision goods and services beyond just a narrow few, and means for commoners to express their voices.’

Some of the tyrannical dictatorships in the sample were England in the 14th century – ‘among the most autocratic in the sample, long before the first stirrings of a shift toward good government beginning about 1500, but which then took centuries to complete’, Professor Blanton told MailOnline.

In the study, governments that shared the resources with the people were awarded a better ‘good government’ score that the powerful autocrats who didn’t.

In societies that meet the academic definition of ‘good governance’, the government meets the needs of the people.

This is mostly because the government depends on those people for the taxes and resources that keep the state afloat. 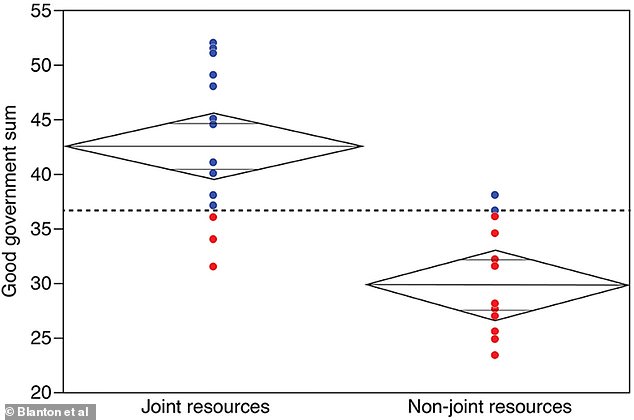 ‘These systems depended heavily on the local population for a good chunk of their resources,’ said Feinman.

Societies with good governance tended to last a bit longer than autocratic governments that keep power concentrated to one person or small group.

Venice, for example, was able to maintain its moral code and good government practices far longer than the Ming, Mughal, and Roman examples, because it had an effective impeachment process, which was exercised on several occasions.

However, when a ‘good’ government collapsed, things tended to be harder for the citizens, because they’d come to rely on the infrastructure of that government in their day-to-day life.

The four societies collapsed and ended when the leadership ‘inexplicably undermined those earlier goals, core values and practices’, the team claim.

‘With good governance, you have infrastructures for communication and bureaucracies to collect taxes, sustain services, and distribute public goods,’ said Feinman.

‘You have an economy that jointly sustains the people and funds the government, and so social networks and institutions become highly connected, economically, socially, and politically.

The researchers also examined a common factor in the collapse of societies with good governance – leaders who abandoned the society’s founding principles and ignored their roles as moral guides for their people. 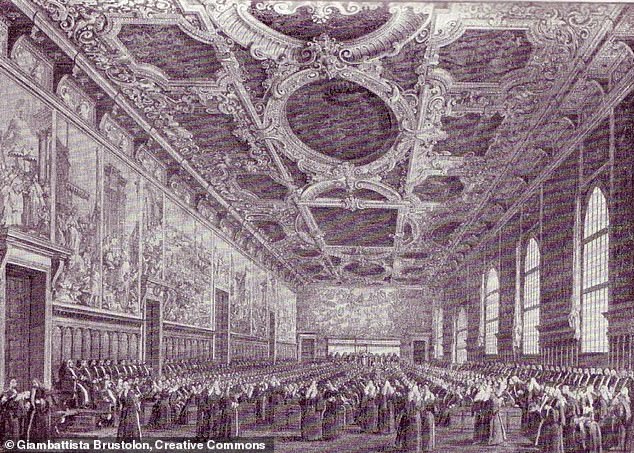 An engraving by Giambattista Brustolon showing the Great Council of Venice. Venice was able to maintain its moral code longer than other examples, perhaps in part because it had an effective impeachment process, which was exercised on several occasions

In a ‘good’ society, a moral leader is one who upholds the core principles and ethos and creeds and values of the overall society.

‘Most societies have some kind of social contract, whether that’s written out or not, and if you have a leader who breaks those principles, then people lose trust, diminish their willingness to pay taxes, move away, or take other steps that undercut the fiscal health of the polity.’

This pattern of amoral leaders destabilising their societies goes back to the Roman Empire and its emperor Commodus.

The Roman Empire was a relatively ‘good’ society, but it fell dramatically when Commodus came to power and didn’t rise to the occasion as a leader.

Instead, he was more interested in performing as a gladiator, slaughtering animals daily as a sport in the Colosseum and identifying himself with the Roman god Hercules.

Dr Andrew Sillett at the University of Oxford’s department of classics, who was not involved with the study, told MailOnline: ‘He lacked the standing necessary to feel comfortable as emperor – too young, not enough military achievements, not a great public speaker – so he tried to compensate ostentatious displays of masculinity.

‘In order to do this for a big audience, he broke the major taboo of appearing in the arena, which aristocrats were usually forbidden from doing.

‘Historian Cassius Dio, who was a Senator under Commodus, reports seeing the emperor fighting an ostrich, which he managed to behead.

‘The fight of this was so unintentionally comic that he had to stop a fellow senator from laughing.

‘Apparently they all chewed some laurel leaves to conceal their grinning.’ 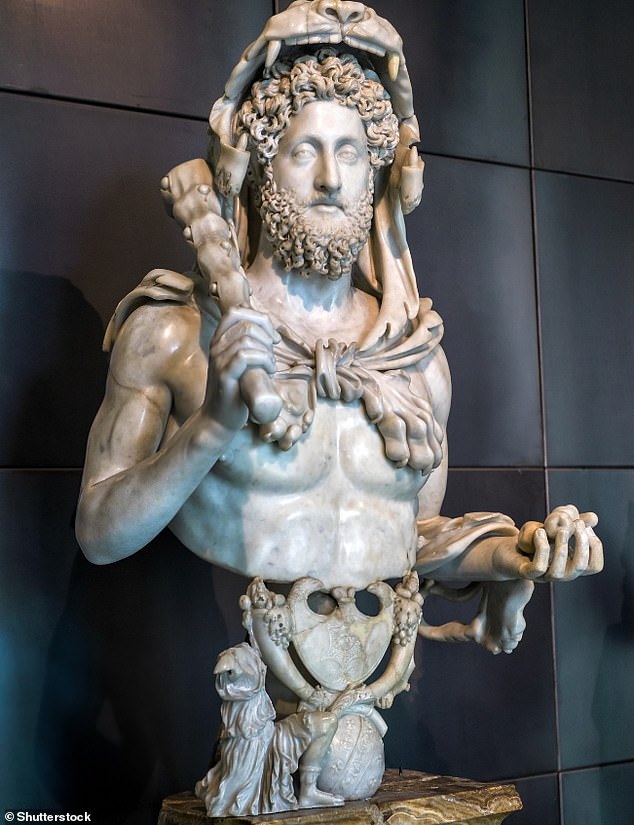 Statue of the ancient Roman emperor Commodus as Hercules in the Capitoline Museum, Italy. The ruler of the empire was more interested in his blonde curls than doing a good job of ruling the empire

Commodus was eventually assassinated by strangulation in his own bath in the year AD 192 and the Empire descended into a period of crisis.

According to the US team, these patterns can be seen today, as ‘corrupt or inept leaders’ threaten the core principles and the stability of the places they govern.

Mounting inequality, concentration of political power, evasion of taxation, hollowing out of bureaucratic institutions, diminishment of infrastructure and declining public services are all evidenced in democratic nations today.

‘What I see around me feels like what I’ve observed in studying the deep histories of other world regions, and now I’m living it in my own life,’ said Feinman.

‘It’s sort of like Groundhog Day for archaeologists and historians.’

Learning about what led to societies collapsing in the past can help us make better choices now, however.

‘History has a chance to tell us something,’ said Feinman. ‘That doesn’t mean it’s going to repeat exactly, but it tends to rhyme and so that means there are lessons in these situations.’

THE INSANITY OF COMMODUS

He was born in AD 161, the son of the popular and highly respected emperor Marcus Aurelius and his wife Faustina the Younger.

Commodus became co-ruler with his father in AD 177, when he was only 15 years old.

During his final illness, his father, Marcus Aurelius became worried that his youthful and pleasure-seeking son might ignore public affairs and descend into debauchery once he became sole ruler.

He was right – soon after his father died in AD 180, Commodus discontinued his father’s war against the Germanic tribes on the Empire’s northern borders, instead coming to terms with them.

Commodus returned Rome to indulge in the pleasures of the great city, including chariot racing and bloodsports.

He is said to have insulted senators, given them positions below their dignity, given the rule of the provinces over to his favourites, and on a personal level to have engaged in scandalous behaviour.

He avoided the running of the empire on a day-to-day basis and instead delegated this to a string of favourites whom he made his chief ministers.

The emperor was concerned with pleasure and displaying his own physical prowess by fighting as a gladiator in the arena or against wild animals during lavish and expensive public games he organised.

He gave Rome a new name, Colonia Commodiana (Colony of Commodus), and imagined that he was the god Hercules, entering the arena to fight as a gladiator or to kill lions with bow and arrow.

His brutal misrule precipitated civil strife that ended 84 years of stability and prosperity within the empire.

On December 31, 192, his advisers had him strangled by Narcissus, a wrestler who was tasked with the deed by a small group of conspirators.

Social activities, board games and cinema ‘may ward off dementia’