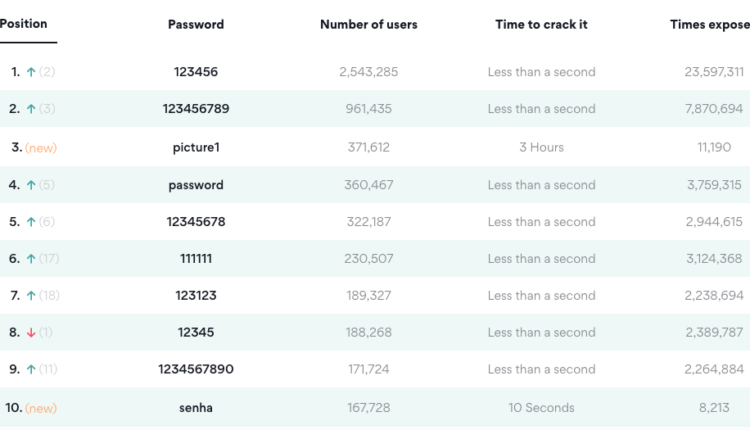 Welcome to the latest edition of Pardon The Intrusion, TNW’s bi-weekly newsletter in which we explore the wild world of security.

And the yearly ritual continues.

The list of worst passwords for 2020 is here, and it’s every bit awful as you would expect.

According to an analysis of 275,699,516 passwords by NordPass, a password manager service from the makers of NordVPN, it’s becoming amply clear that a lot of people are still banking on simple, easy-to-guess passwords despite the constant threat of data breaches and other security threats.

But a password combination of letters and numbers is still a weak password as long as it can be deciphered.

“Your weak password can be used for credential stuffing attacks, where the breached logins are used to gain unauthorized access to user accounts,” says Chad Hammond, security expert at NordPass.

“If you fall victim to a credential stuffing attack, you might lose your Facebook or another important account with all its content. Also, your email address could be used for phishing attacks or for scamming your family and friends, who may very well fall for it, as the email will supposedly be coming from you.”

I get it. Remembering unique, strong passwords for a gazillion online accounts isn’t easy, especially this year with the shift to remote work.

In a separate study published by NordPass last month, an average user was revealed to have around 100 passwords, up 25% from last year. That’s a lot to keep track of!

So what can be done to beef up your security? Use a password manager and turn on two-factor authentication wherever possible. At the same time, don’t make the same mistake I did by not noting down the backup codes.

US President Trump fired the director of the Cybersecurity and Infrastructure Security Agency, Bumble and Cisco fixed critical bugs, and Zoom agreed to enhance its security policies after falsely claiming its video calls were protected by end-to-end encryption.

Healthcare systems, educational institutions, and private sector firms are fighting a steady stream of hackers, who are locking critical systems and threatening to publish sensitive information if their demands are not met.

Now according to Sophos 2021 threat report, several ransomware operators have taken up extortion as a side-hustle. What’s more, entry level cybercriminals having access to ransomware-as-a-service (RaaS) type tools are set to become a more dangerous threat.

That’s it. See you all in two weeks. Stay safe!

Facebook launches cloud gaming for desktop and Android, but says Apple is not allowing the it on iOS

Party with 400 guests at $1.1million Long Island mansion rented on Airbnb is busted…