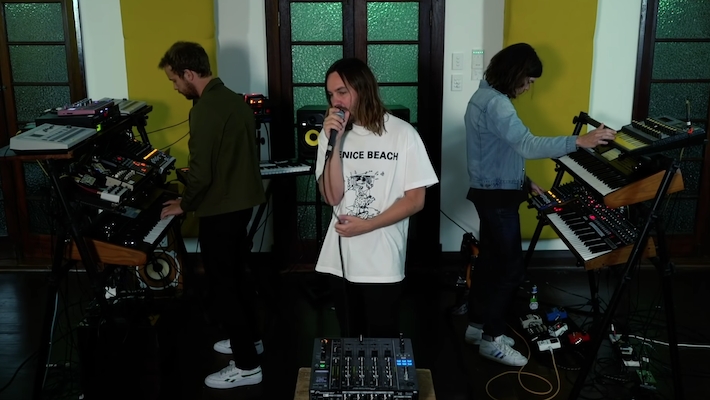 Tame Impala began the year with his impressive album The Slow Rush — his first release in five years. Since then, the musician, real name Kevin Parker has delivered a number of covers and remixes, among them new versions of “Borderline” with Blood Orange, “Guilty Conscience” with 070 Shake, and more. He’s also covered Lady Gaga’s “Perfect Illusion,” which he helped-co-write, and John Lennon’s “Jealous Guy.” Now he’s added another cover to the list, jumping on BBC Radio 1 to show off his twist on Nelly Furtado’s 2006 hit “Say It Right.”

Parker takes the upbeat, Grammy-nominated track and strips it down, resulting in a delicate and breezy cover. He performed the track, alongside two keyboard players, from the trio’s hometown of Perth, Australia. He also performed “Is It True” and “Breathe Deeper” from his The Slow Rush album during their BBC Radio 1.

Last month, Parker took over an empty Perth stadium to perform “Is It True” and “Elephant” in partnership with FIFA 21, with the former appearing on the video game’s soundtrack. He also shared the tentative dates for a 2021 tour supporting The Slow Rush, with the hope that he will be able to perform in person next year, just like things used to be.

You can watch the performance in the video above.