Terrifying moment tinny rider, 12, is attacked on his boat on the Coomera River on the Gold Coast 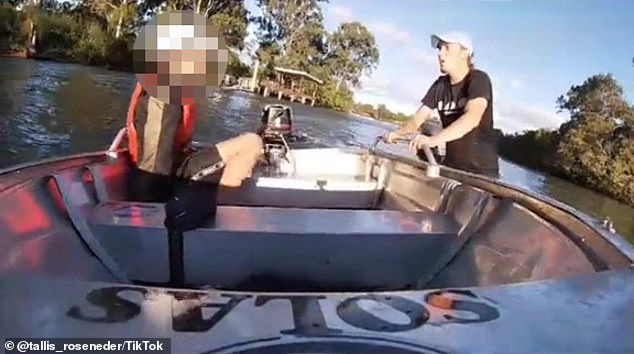 A terrifying altercation between two ‘tinny rats’ almost resulted in one of them being forced to swim through shark-infested waters.

A video showing the frightening confrontation on the Coomera River, on the Gold Coast, was uploaded to TikTok by Tallis Roseneder, 15, and has been seen a massive 3.7 million times.

The clip shows one boy ram a dinghy with his inflatable, then lunge at a smaller boy in the boat before the pair start arguing.

The viral video, now seen over 3.7 million times, shows a bigger boy apparently trying to force a smaller boy out of his boat and into the Coomera River 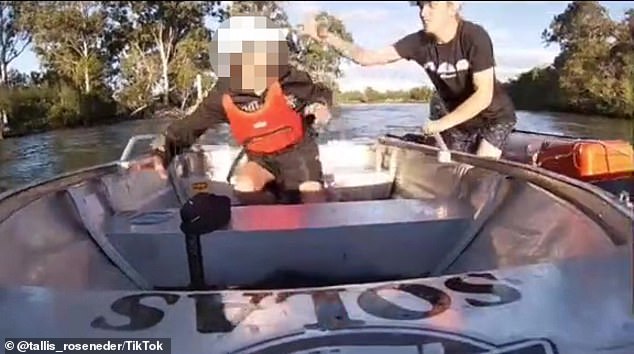 The bigger boy, who can be heard saying ‘I’m going to make you swim’ lunges at the smaller boy and shakes his boat. Tinny-racing teens in Gold Coast canals have been dubbed ‘tinny rats’ by locals

Mr Roseneder told Daily Mail Australia the smaller lad in the lifejacket is his friend, and just 12 years old, and the bigger boy was 18, but not a friend of either of them.

He claimed the younger boy was being ordered to get out of his dinghy and swim, even though the river is a hotspot for bull sharks.

Mr Roseneder said he didn’t appear in the clip.

‘The guy trying to take it said “get out of the boat and swim” and kept constantly saying that, he said it a good four times, just saying, “you’re swimming, get out”,’ Mr Roseneder told Daily Mail Australia.

‘Then he tried to shake the boat to make him fall out.’

Music playing on one of the boats makes it difficult to hear all of what is being said, but at one point the older boy does seem to say ‘I’m going to make you swim’. 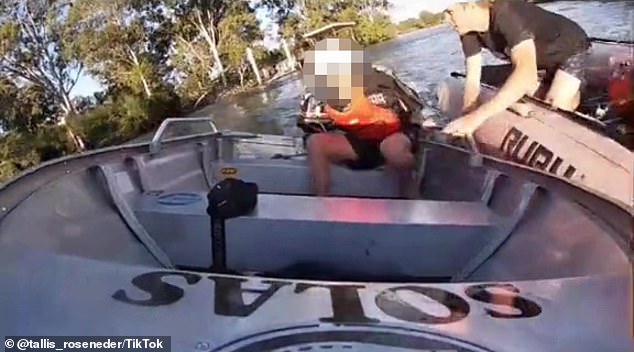 The bigger boy tries to reach into the smaller boy’s boat in the video, which was seen over 3.7 million times on TikTok

Mr Roseneder claimed the clip followed an incident in which the older man was ‘sprayed’ by him and his friends on the river.

He uploaded a second clip of the altercation to TikTok, in which the bigger boy shook the smaller boy’s boat before letting him go.

In 2018, Gold Coast residents called on police after claiming their communities were being terrorised by ‘tinny rats’ hooning through canals.