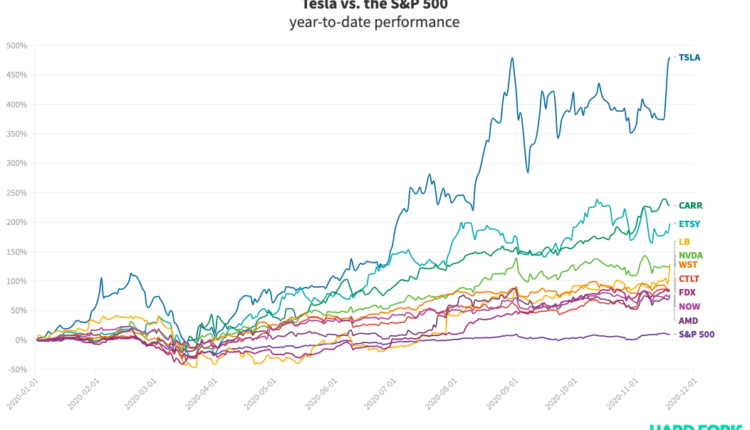 
Tesla finally enters the S&P 500 next month, an event Goldman Sachs says could spark an $8 billion rally for the electric vehicle wunderstock.

News of its S&P 500 nod has already pushed Tesla’s share price up 22% to eclipse the index’s top performers CARR and ETSY by more than 200%.

Indeed, if Tesla was in the S&P 500 today, it would be the index’s best performing stock this year — by far.

But in around 31 days, a reported $11 trillion in mutual funds and other investments tracking the S&P are expected to buy Tesla stock, and some Wall Street insiders are nervous of what might happen.

“I’m more worried about how it affects our index funds and passive holdings than anything else.”

(If the visualization below doesn’t show, try reloading this page in your browser’s “Desktop Mode.”)

Tesla is bigger than Visa, but not quite as big as Berkshire

Lau has a point. Tesla is already one of the biggest companies in the world. If Tesla was part of the S&P 500 today, it would be the index’s seventh biggest company, ahead of industry giants Visa, Walmart, Johnson & Johnson, and JPMorgan Chase.

Considering Tesla’s newly-found girth, any share price reversal could drag market-wide indexes like the S&P 500 down with it.

These concerns are amplified if institutional demand does suddenly boost Tesla’s share price on December 21.

After all, stock that goes up can come down just as quickly.

Whatever happens, Tesla’s addition to the S&P 500 gives a degree of validation to investors who’ve already bought in, and offers incentive for the world’s largest funds to jump in — even as the stock trades at new record highs.

Microsoft: Users can now delete all passwords from their accounts and log in with…

The AirPods 3 were a no-show, but don’t count them out yet