A jobless teenager festooned with facial piercings has revealed he started dressing in black at the age of 12 after he found a community of goths in online chatrooms.

Novak Daniels made headlines in September after he claimed to have applied for dozens of jobs per fortnight on Queensland’s Sunshine Coast with no luck.

While the 18-year-old high school dropout has received a barrage of hate mail from people who are turned off by his mohawk and garish metal studs, he opened up to Daily Mail Australia about why he will never change his look.

As a lonely outcast at school who couldn’t make friends amid a desperate battle with an eating disorder, Mr Daniels turned to online communities as a pre-teen to find connection with other people. 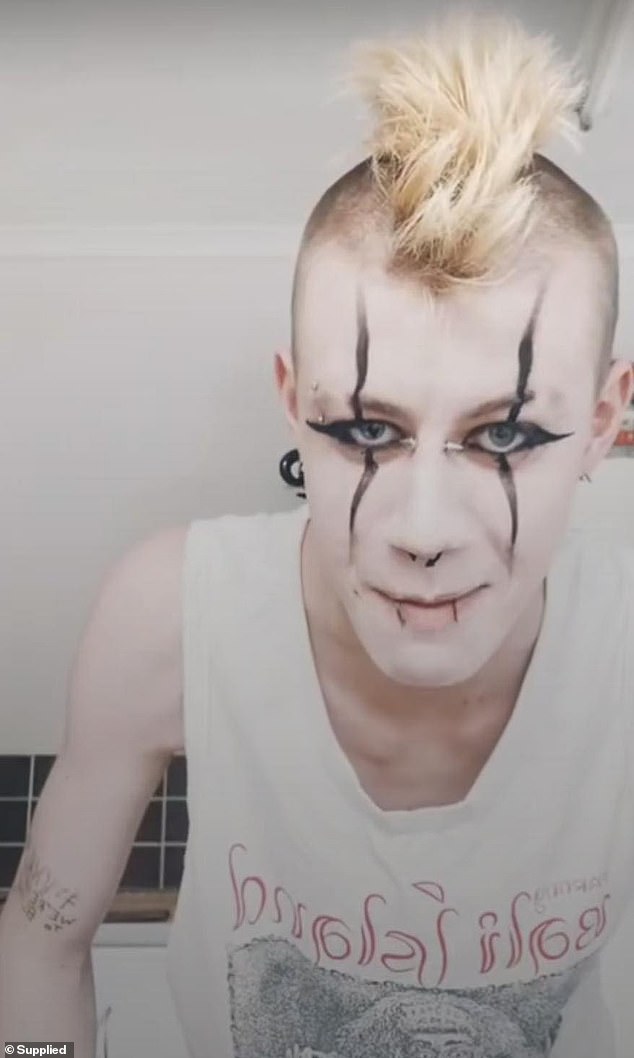 He found a group of young ‘punks’ in chatrooms and decided to trade in his blonde hair and baby-faced facade for box dyes and heavy make up.

‘I found a niche in the alternative community online and fit in instantly – I started seeing all these other different cultures and fell in love with the punk culture,’ he said.

‘I started using eyeliner, wearing trenchcoats and leather jackets while going to school.’

As a 12-year-old, the self-proclaimed ‘anarchist’ would explain to disgruntled teachers that he felt uncomfortable in uniform – and called them out for ‘discrimination’ when they argued back.

Mr Daniels’ didn’t see the point in finishing high school and dropped out in his final year, with his refusal to follow ‘oppressive’ social norms continuing into adulthood.

While he now sports green hair and tattoos, wears torn punk-inspired clothes and thick metal chains and spikes around his neck and wrists, he admitted he would be willing to dress down and rinse the colour from his hair in exchange for a job.

‘But I draw the line at changing my mohawk or taking out my piercings,’ he added.

‘I stand my ground when I say I don’t want to be discriminated against for who I am.’ 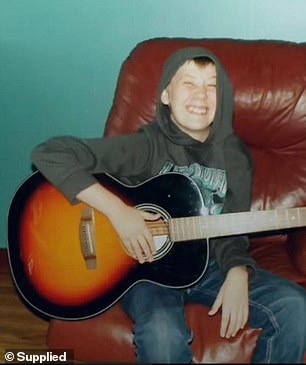 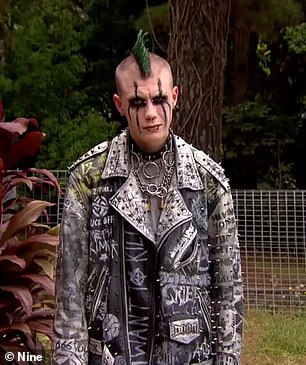 As a 12-year-old, the self-proclaimed ‘anarchist’ (pictured left as a child) would explain to disgruntled teachers that he felt uncomfortable in uniform. Pictured right: Mr Daniels today 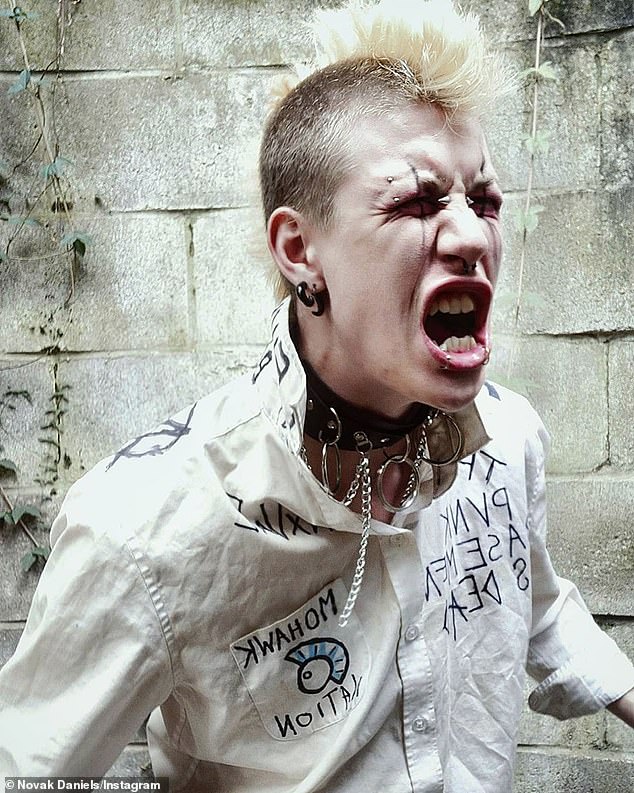 The teen has some work experience, including a previous stint in an office job and three months working as a barista 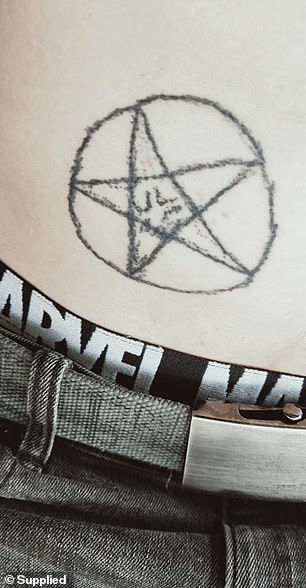 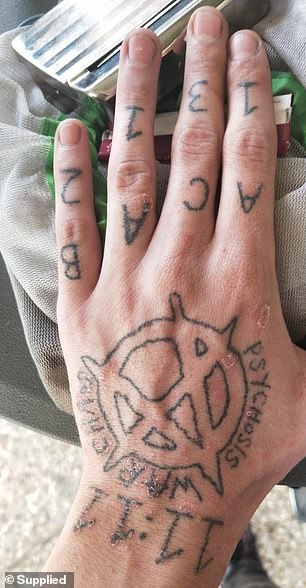 Mr Daniels said the ‘satanic pentogram’ on his torso scares away ‘god folk’ (left). The tattoo on his hand is for the ‘psychotic illness I carry’. He also said ACAB 1312 (on his fingers) means ‘all coppers are b***ards’

Despite battles with body image as a youngster, Mr Daniels said he feels ‘more confident’ as an adult with his punk-inspired look, which he calls ‘Novacore’ – an amalgamation of his name ‘Novak’ and ‘hardcore’.

He has planned ‘hundreds’ of tattoos to add to the six inked on his chest, hands and torso.

‘Every single one has meaning, but my favourite is probably the anarchy symbol on my hand – it represents war, chaos and psychosis. There is a constant war in my head and everyone around me.’

‘Also because I’m an anarchist and I think politics are whack and I don’t think they should exist.’ 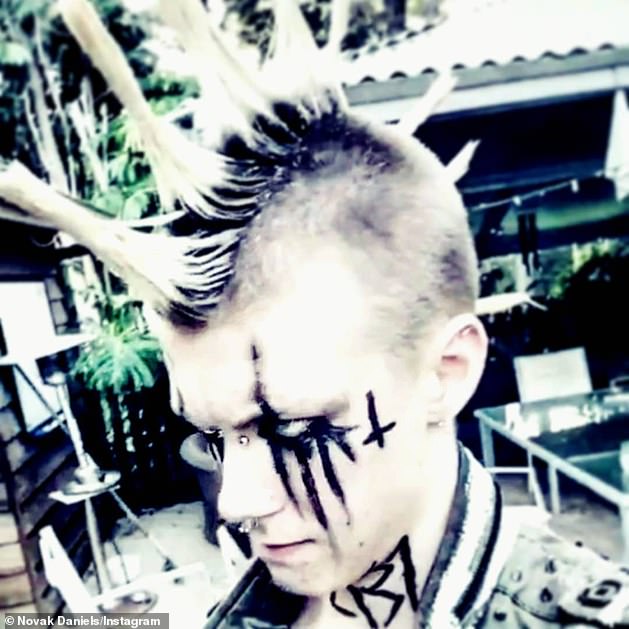 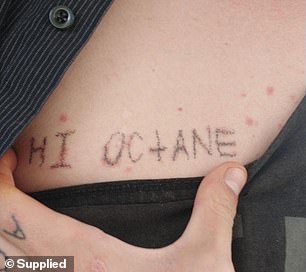 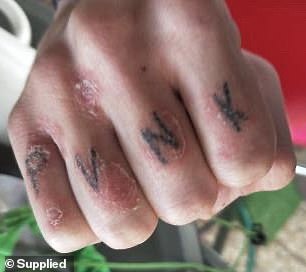 Mr Daniels said the tattoo that reads ‘hi octane’ (left) is his favourite way of describing himself. ‘Punk’, written across his fingers, is representative of his personal style (right)

On Monday, A Current Affair reported that Mr Daniels’ was offered a job in regional Victoria after undergoing a ‘make-under’, switching his outlandish make up, chains and green hair for a button down shirt and slacks.

But he denied any knowledge of the job offer while speaking with Daily Mail Australia.

The teenager also reiterated that he lives in Queensland – thousands of kilometres away from coronavirus-addled Victoria, which has suffered mass business closures amid he pandemic. 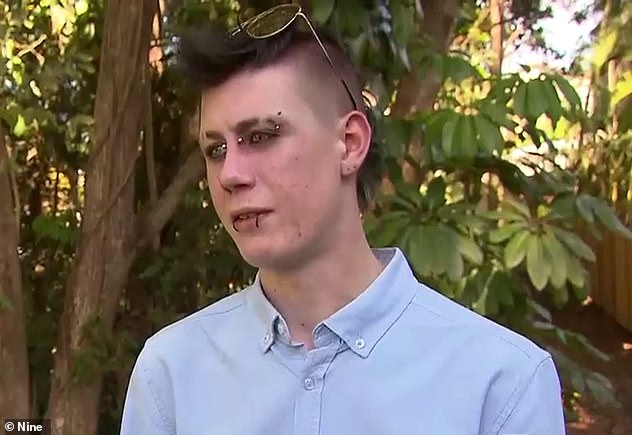 Pictured: Mr Daniels after undergoing a major ‘make-under’, switching his outlandish make up, chains and green hair for a button down shirt and slacks

Novak Daniels (bottom right) has applied for countless positions in Queensland’s Sunshine Coast as a waiter, lawn mower, welder and boiler maker with no luck

The teen has some work experience, including a previous stint in an office job and three months working in his father’s cafe as a barista.

‘I do have work experience and qualifications and certificates, I am a hard worker, my references say good things – it’s simply because there’s a picture there and I look a bit different.’

When asked what kind of job he would accept, Mr Daniels said he would like to start his own punk clothing empire.

‘I don’t have the money for it right now, but when I do I’m going to set it up.’ 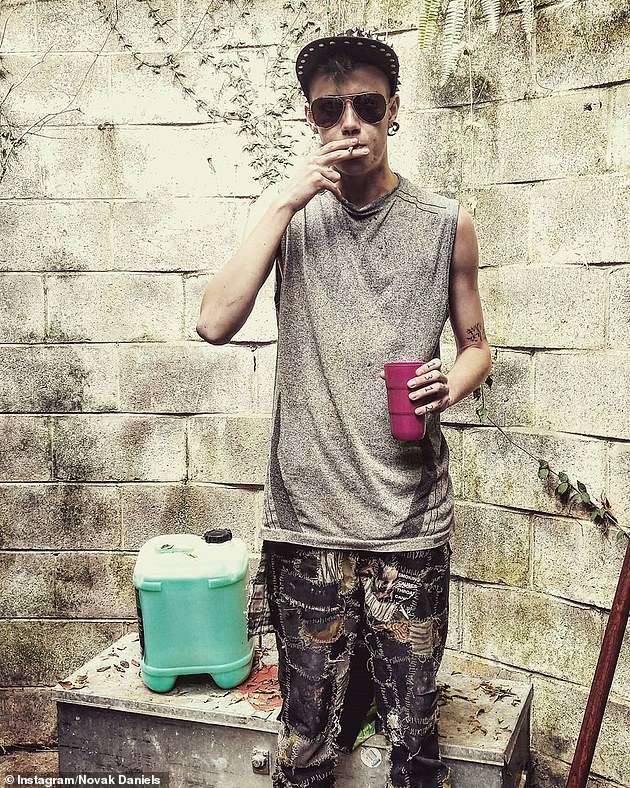 He has more than 57,000 followers on the video sharing platform and says his following proves his skills are ‘transferable’

Until then, he aspires to become a butcher or a baker while growing his social media presence.

‘If you google me, it says I’m a micro-influencer and I like the idea of that.’

A video uploaded to his 57,000 followers on TikTok in September included the caption: ‘I have to start working because I can’t support myself doing nothing but I don’t want to.’

He said his growing social media presence proved he had a good understanding of how to produce viral content, referencing a TikTok video that gathered 1.8million views.

Anti-lockdown protesters clash with police in Melbourne – officers use pepper…