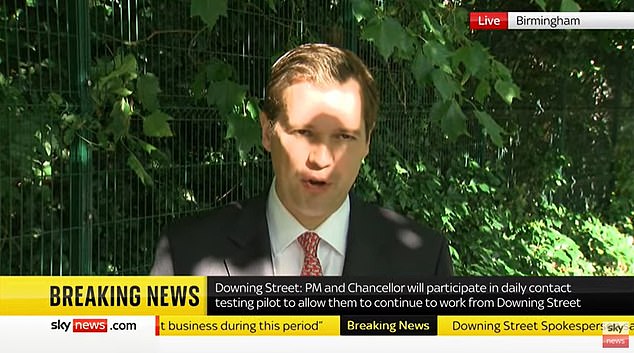 Boris Johnson‘s U-turn over his plan to avoid quarantine by using a daily testing pilot scheme will have caused many red faces in Government.

And none more so that that of Robert Jenrick, who was sent out this morning to tell the nation that the Prime Minister was right to avoid self-isolation.

The Communities Secretary was drafted in for the Sunday media round because Sajid Javid, who was meant to be on screen today, has Covid – an infection which kickstarted the entire furore.

Mr Jenrick faced questions from Birmingham about the PM and Chancellor Rishi Sunak‘s involvement in a pilot scheme that allows them to take daily lateral flow tests and skip quarantine if they come back negative.

He appeared on Sky at 8.30am and again on the BBC at 9.40am, finishing a lengthy interview with Andrew Marr at 10am before heading to Times Radio.

But less than an hour later, at 10.38am, No10 confirmed that Mr Johnson and the Chancellor had changed their mind and would be self-isolating for 10 days like so many other people across England.

Mr Jenrick was drafted in to face questions from Birmingham about the PM and Chancellor Rishi Sunak’s involvement in a pilot scheme that allows them to take daily lateral flow tests and skip quarantine if they come back negative.

Pingdemic chaos: Marks and Spencer could shut early, rail services are axed and the post is hit

‘Pingdemic’ chaos is spreading across Britain today with more businesses announcing temporary closures and services facing delays due to the growing number of staff being told to self-isolate.

Rail users in the north of England and parts of Wales are being warned of delays – after a London tube line was closed entirely yesterday – due to a shortage of drivers.

Pubs, many of which are ramping-up staffing levels ahead of Monday’s ‘Freedom Day’, are temporarily closing due to staff being ordered into isolation by the NHS Covid-19 app.

Hair salons, which are still recovering from months of lockdown, are also having to close, along with sports facilities.

Schools are also facing tough decisions on whether to move classes online close early for the summer due to rising numbers of teachers and staff in isolation.

Royal Mail sorting offices have also been hit, while garden waste collections in some areas have been suspended to allow isolation-hampered councils to focus on waste bins.

Meanwhile, as temperatures soar to 86F in some parts of England, some tourist attractions are having to close due to a lack of staff.

And today a warning was issued of a potential MOT backlog, with garages having to mass cancel bookings due to their mechanics being forced into isolation.

It comes as Transport for London (TfL) was yesterday forced to shut the Metropolitan tube line amid staff shortages.

M&S bosses also warned last night that store hours may have to be cut with up to one in five supermarket staff forced into Covid isolation.

In his Sky interview, Mr Jenrick had tried to explain the situation by saying the pilot was not just available to politicians but was also being used by Border Force and the Transport for London.

He added that it was not a free pass but ‘means that they can conduct important government business but they won’t be able to go out socialising or meet other friends and family, so they have to limit their contact with other people as much as they possibly can.’

Under questioning from Trevor Phillips he said: ‘This is a pilot that is actually being used by around 20 organisations so hundreds, if not thousands, of public sector staff who work in those organisations will be able to use this pilot.

‘We’ll be learning from it and of course, if it is possible to roll it out more broadly because it is proven to be safe and successful, then we will do but the rest of us who are not yet part of that pilot, the crucial advice is if you are contacted by NHS Test and Trace, to take that very seriously and to self-isolate because although it can be frustrating, that has helped us to prevent thousands of cases.’

Later he told the BBC’s Marr that the pilot was ‘a well known and long-standing one’, adding: ‘They will be isolating, but using the pilot scheme for daily testing, which is available to a range of public sector organisations, which enables you to do your essential business and get tested on a daily basis in specialist asymptomatic testing centres like the one that there now is Downing Street.

‘But then outside of that work environment to not socialise, not mix with other people.

‘So it clearly is a less restrictive form of isolation than many other members of the public are enduring.’

However, just minutes later, as he was perhaps enjoying a cold drink or a cup of coffee after his early start, a Downing Street spokesman said: ‘He was at Chequers when contacted by Test and Trace and will remain there to isolate.

‘He will not be taking part in the testing pilot. He will continue to conduct meetings with ministers remotely.

‘The Chancellor has also been contacted and will also isolate as required and will not be taking part in the pilot.’

In what might be seen as the most difficult of his comments, Mr Jenrick later  told Times Radio: ‘It is extremely important that we all exercise personal responsibility and good judgement right now.

‘That’s the phase of the virus that we’re moving into and moving away from legalistic requirements and asking people to exercise common sense.

‘I appreciate the frustration that people are feeling because so many people are being asked to self isolate right now.

‘But it is a really critical step that we keep doing that and myself, if I were pinged today and millions of other people across the country I think appreciate that and are willing to do so in order to ensure that we can protect more people, and move forward with the easing of restrictions that is going to happen tomorrow.’ 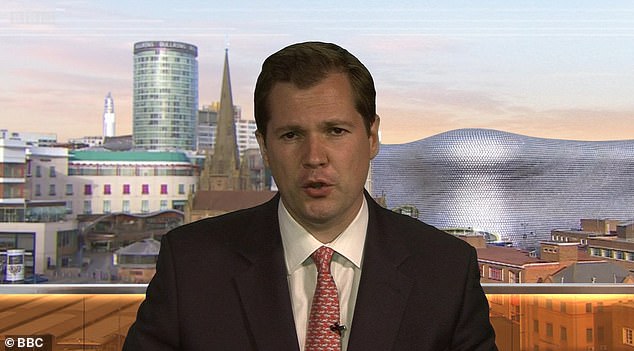 Later he told the BBC’s Marr that the pilot was ‘a well known and long-standing one’, adding: ‘They will be isolating, but using the pilot scheme for daily testing, which is available to a range of public sector organisations’

The Prime Minister and Mr Sunak announced earlier they would use a little-known pilot scheme which allows people out of self-isolation every day to continue working if they pass a daily lateral flow test.

But amid red-hot fury from politicians, business leaders and the public they caved in within hours and revealed they would join thousands of people who are having to self-isolate.

They had faced accusations they were accessing a ‘VIP lane’ that was not available workers who are having to isolate, bringing some businesses and public transport o the bring of collapse.

The Health Secretary triggered fears of a disruptive ‘pingdemic’ striking at the heart of Government after reveling yesterday he has tested positive.

Mr Javid had visited the Commons and Downing Street in previous days – and is understood to have held a lengthy face-to-face meeting with Boris Johnson just before his symptoms developed – sparking concerns that senior figures across Whitehall would have to be confined to home.

One insider warned that ‘half the Cabinet’ could be in isolation by the end of the week.

Labour leader Keir Starmer said: ‘This Conservative Government is in chaos. Boris Johnson and Rishi Sunak have been busted yet again for thinking the rules that we are all following don’t apply to them.

‘The public have done so much to stick to the rules. At a time when we need to maintain confidence in self isolation, parents, workers and businesses will be wondering what on earth is going on in Downing Street.

‘The way the Prime Minister conducts himself creates chaos, makes for bad government and has deadly consequences for the British public.

‘Yet again the Conservatives fixed the rules to benefit themselves, and only backtracked when they were found out. They robbed the bank, got caught and have now offered to give the money back.’