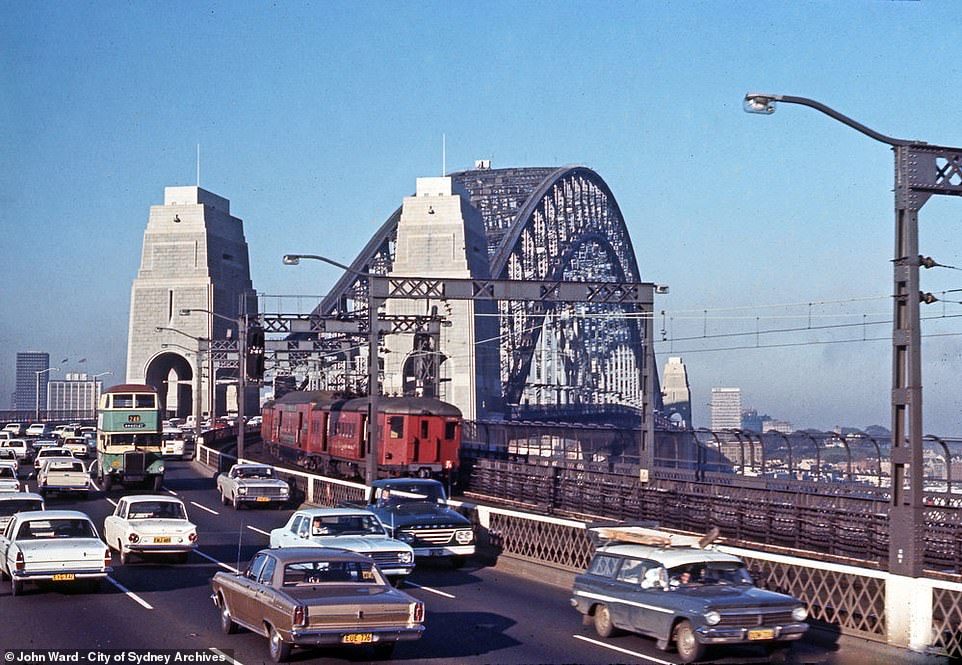 This nostalgic photograph of the morning commute in 1969 across the Sydney Harbour Bridge harks back to a time when most cars sold in Australia were either a Ford or a Holden with six cylinders – or an occasional V8.

An era of 45 per cent tariffs on imported cars meant most motorists five decades ago had little choice but to buy a locally-made model.

In the year mankind landed on the moon, almost half the cars sold in Australia were a Holden.

Today, common Holdens built during the 1960s are worth more Fords from the same era – but the popularity of both as collectors’ items means you will pay a lot more today than motorists did 50 years ago.

They all had chrome bumper bars and gulped leaded petrol.

This 1969 image of the Sydney Harbour Bridge during peak hour harks back to a time when most cars sold in Australia where either a Ford or a Holden with six cylinders – or an occasional V8. Pictured left to right is an HR Holden Special, Mark I Ford Cortina, ZA Ford Fairlane, HK Holden Kingswood, XT Ford Falcon ute, Dodge AT4 truck and EH Holden Special station wagon

Christophe Boribon, the national auctions manager of vintage car insurer Shannons, said the 1960s was really the start of the traditional Holden versus Ford rivalry.

In 1966, tariffs on imported cars were raised to 45 per cent

Labor prime minister Gough Whitlam in 1973 reduced this to 33.75 per cent as part of an across-the-board 25 per cent tariff cuts program

Car tariffs were reduced to 35 per cent in 1992 and to 30 per cent in 1994, under Paul Keating, but four-wheel drives, then classified as primary producer vehicles, had tariffs slashed to 15 per cent

By October 2017, the last Australian-made car rolled off the production line when Holden manufactured its final Commodore in Adelaide

‘It became a staple part of the Australian family, where we started seeing some people taking on the Holden badge and others taking on the Ford badge,’ he told Daily Mail Australia.

‘Maybe that’s the era that started creating that rivalry.

‘These are also the times we saw those cars also taking part in competitions.’

The volume-selling Holden of the 1960s had six cylinders and wore either a Special or Kingswood badge while the more upmarket version was called the Premier.

When it came to vintage family Holdens from that decade, Mr Boribon said collectors were particularly interested in the HR and EH models, with Premiers likely to fetch a lot more than Specials.

‘The EHs are very, very popular with club members today and sought after,’ Mr Boribon said.

‘In the right spec, like a Premier, they command very, very good money.’

Ford’s bestseller was the American-designed Falcon, which was also sold as a Futura and Fairmont.

A luxury version with a longer wheelbase was called the Fairlane and was the limousine of choice for premiers and prime ministers.

Despite being upmarket, Fairlanes aren’t as sought after on the classic car market.

‘The Falcons and the Fairmonts have got really strong following, the Fairlane even though it has good following, it’s a slightly different following,’ Mr Boribon said.

More so than Fords, Holdens have had a special place in motoring hearts by virtue of having an Australian name.

The nostalgia dates back to November 1948 when the first 48-215 model rolled off the production line at Fishermans Bend in Melbourne in the presence of Labor prime minister Ben Chifley.

With General Motors retiring the Holden name in 2021, after 72 years of service, once-common cars with the lion badge are fetching a lot more at auctions than Fords.

On the far right of the Harbour Bridge image is an EH Holden Special wagon heading north towards North Sydney.

Just 2km away, the Opera House was a construction site as Australian troops 7,000km away fought in Vietnam. 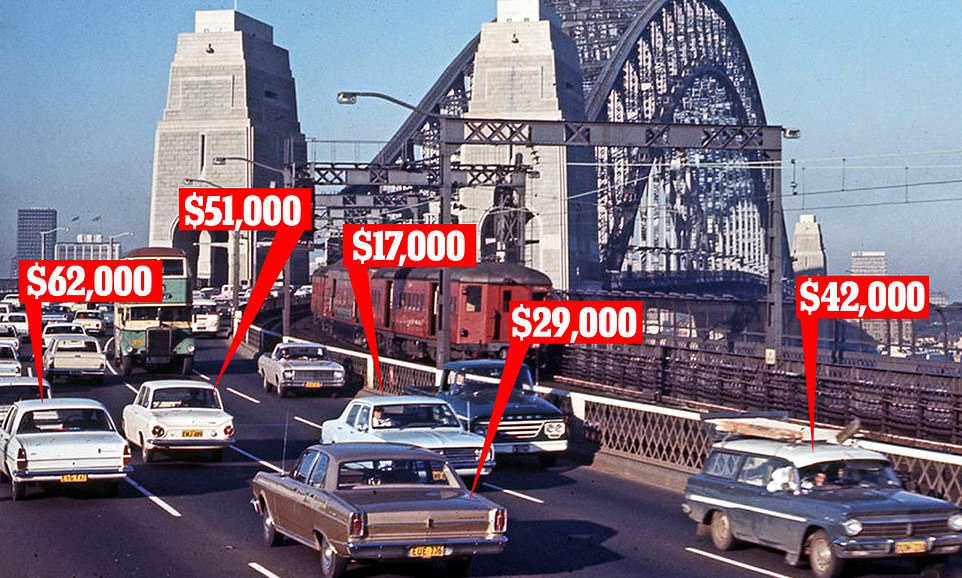 A Premier version of the HR Holden could fetch $62,000. A GT500 version of the Mark I Ford Cortina would be worth upwards of $51,000 – more than ten times the price of an ordinary version of the English-designed small car. A ZA Ford Fairlane is less sought after than a Falcon from the era and could cost $29,000. An HK Holden Kingswood sedan would only worth $17,000 – a fraction of the $300,000-plus price tag for a rare Monaro coupe. An EH Holden is sought after with prices of more than $42,000 for a Premier version 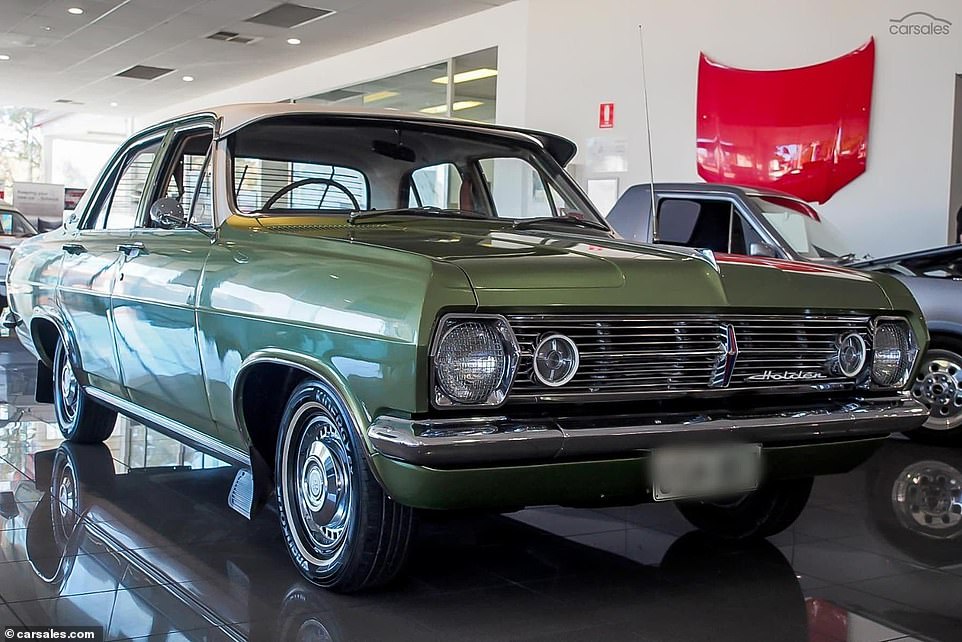 A station wagon version with a three-speed manual transmission sold for $23,500 in 2017.

An HR Holden Special sits on the far left of this 1969 image.

A slightly upmarket HR Premier sedan with a two-speed automatic gearbox, built in 1967, fetched $24,000 in 2017 at a Shannons auction in Sydney.

That is a lot more than the brand new price of $2,675 in 1966, after tax, during the first year of decimal currency in Australia. The cheaper Special was $1,770 before tax, newspaper advertisements from that era show.

An HK Holden Kingswood, heading north in the picture, would be worth much less.

The Fords in this image don’t fare nearly as well at auction. 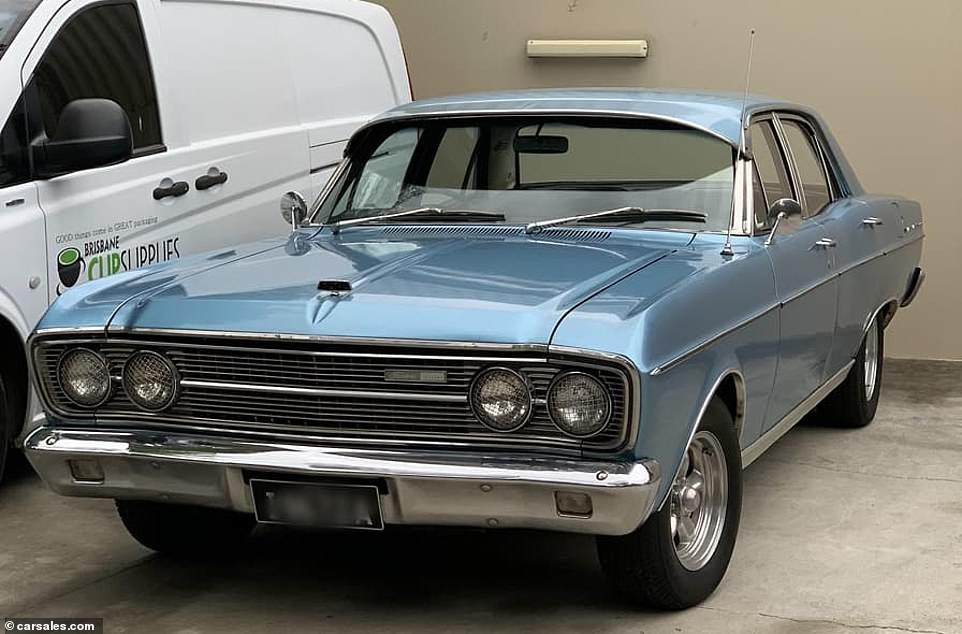 An English-designed but Australian assembled four-cylinder Cortina Mark I, built in 1966, last year sold for just $11,500.

Mr Boribon said some versions of this race car, developed by Harry Firth and made in Australia, had fetched even higher prices and had a ‘massive following’.

‘Those Mark I Cortinas are very, very popular in the two-door GT500 spec, they’re very, very sought after,’ he said.

An XT Ford Falcon, from the same vintage as the ute on the Harbour Bridge, would fetch a decent price with a 1969 sedan in August selling for $25,500. 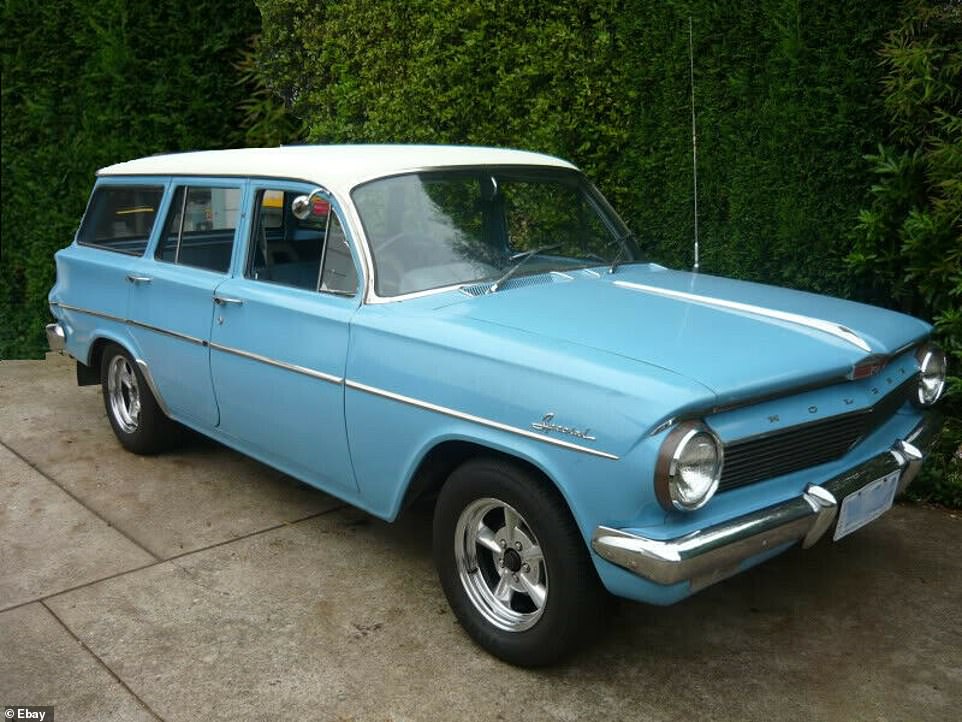 On the far right of the Harbour Bridge image is an EH Holden Special wagon heading north towards North Sydney. Pictured here is a 1964 version on Ebay

The XT Falcons are less sought after than the slightly later XY models.

A 1971 GTHO Phase III this year sold for $400,000 at a Grays Online auction despite missing an engine as it was one of just 300 high performance cars built.

As for the Dodge AT4 truck heading north, a 1962 version would be worth just $15,000 with a restored and repainted one now listed on Carsales.

Unlike the red rattler train heading towards the city, at least some version of the cars on the Sydney Harbour Bridge are still running.

In 2021, Australia still makes trains but the same can’t be said for passenger cars.

Dylan Farrow, 35, asks for ’empathy’ from viewers who watch…