TikTok ‘Buss It’ Challenge Is A Beautiful Thing 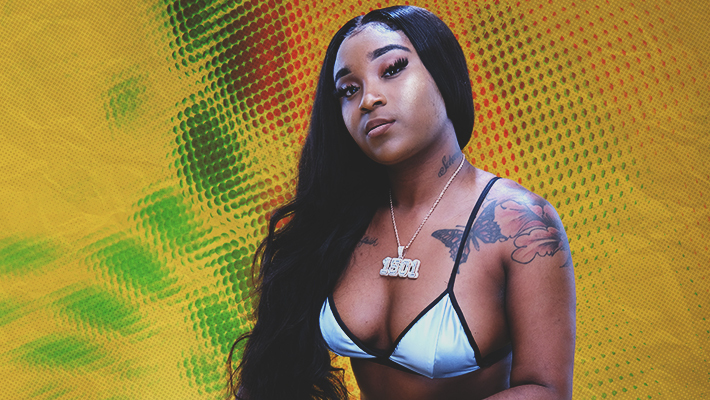 POV: Open up TikTok (or any social media app) and see a friend or some famous celeb looking idly into the camera with their work-from-home outfit on while Nelly’s “Hot In Herre” plays in the background. Then the beat drops. Surprise! It’s actually Erica Banks’ “Buss It.” Your eyes drop low with the beat. Now you’re looking at an instant glow-up and sultry, low twerk.

A TikTok creator named Erika Davila was the first to pull this feat off, except her plea was to have people go crazy with the glow-up part and people absolutely did.

Enter 2021 and everybody and their mama is participating in the “Buss It” Challenge on TikTok, bringing their carefully created videos over to Instagram, Facebook, and Twitter. And while the phenomenon takes the world by storm, perhaps no one is loving it more than Banks herself. The DeSoto native thinks the phenomenon is “exciting” and rightfully so, especially as we go into the year with 2020 turbulence.

“Seeing all types of women showcase their confidence in the ‘Buss It’ Challenge is a beautiful thing to witness,” the 21-year-old told Uproxx over the phone.

So far, there have been over 2 million videos made to “Buss It” on TikTok, including clips made by Rico Nasty, Dream Doll, Reginae Carter, LaLa Milan, Iggy Azalea, and fellow Texas rapper Just Brittany.

Signed to Carl Crawford’s 1501 Certified Entertainment label (home to Grammy-nominated rap star Megan Thee Stallion), Banks recently inked a deal with Warner Records where she joins a roster of megastars. Before that she was already being recognized as one to watch by her peers and even got an early co-sign from Nicki Minaj in 2020.

The Texas rap girls are really running it right now and in front of the pack, at the tippy-top of 2021, is Dallas’ own Erica Banks. Speaking to Uproxx, Banks shares how she first discovered “Buss It” was becoming a viral trend on TikTok, names some of her favorites, tells us if labelmate Megan Thee Stallion will be on the remix, and gives us the lowdown on what’s up next.

So obviously your song, “Buss It,” it’s been out since last year, but it’s been blowing up on TikTok. What were your initial thoughts when you first realized people were making these videos to your song?

It was exciting. I actually woke up to it, literally, because I didn’t know that was happening. Once I found out that it was going viral on TikTok, it was just crazy. It was kind of unbelievable because it just came out of nowhere. As an artist, seeing your song blow up overnight, it was just a little overwhelming, but it was very exciting at the same time.

How does it feel to see all these young ladies getting it together to show out on TikTok to “Buss It”?

Seeing all types of women showcase their confidence in the “Buss It” Challenge is a beautiful thing to witness.

Tell me how you found out. Did somebody tell you?

I want to say Elora, my publicist, reached out to me with a screenshot of it and my producer, SGT J, who produced the record, had also sent me a screenshot of how many videos have been made. This was last week. At this time, it was at like 5,000 videos a week ago. Today, we’re at a million videos, which is very crazy. I literally found out through a screenshot.

Were you able to find out who kicked off the “Buss It” Challenge?

Yes, we were able to find the creator. I actually posted her on my Instagram yesterday, shouting her out and thanking her for starting the challenge. She started it, everybody hopped on, and now it’s one of the hottest challenges going right now.

In the song you sample Nelly’s “Hot in Herre.” Have you talked to Nelly at all? Has he thanked you?

I have not talked to Nelly. It would be dope if I got to talk to him but I haven’t gotten a chance to talk to him. However, he did hit me with a follow on Instagram the other day. He also reposted his girlfriend dancing to the song, doing the “Buss It” challenge. So, he has let me know that he does see me.

A few days ago, on your Instagram story, you pointed out a performance where people were kind of just standing there while you were performing “Buss It.” Now, suddenly everybody’s singing your song and everybody wants to talk to you.

It’s exciting. You know, I feel like everybody has their time and I feel like at this time, it wasn’t my time yet, but was coming. Every time I do a show, the crowd is bigger and bigger, or I see more and more people that know the words. At this point, I could probably go do a show pretty much anywhere, and they would probably know the whole hook. I just feel like it’s a matter of being patient, but at that time I was still a hungry artist. I’m still a hungry artist. I just think it just takes time to get where you’re trying to go.

I know as the song has been gaining traction, some people, mostly men, continue to criticize women in rap and complain about all they do is rap about sex. What are your thoughts on that?

I personally feel like that’s something that people are going to always do. I do in myself because if you just want to be technical and real, sex sells. I will speak for myself only and say that I do have songs that don’t speak about sex. I actually have a couple of records like that. “Tony Story” is one of them. I actually have the visual out for that. So, I’m very versatile. Sex isn’t always my go-to, but at the same time you want to please the fans and you want to please the people. It’s definitely something that should be talked about in music if you just want to keep people interested. But I mean, that’s the world we live in, so.

Yeah, I feel like everybody’s been rapping about sex since the dawn of time. Now, I want to talk about your team, 1501 Certified. You’re signed with Carl Crawford. I know Megan Thee Stallion’s on the label, and there’s a bunch of other people on the label. What is it like working with your team, and Carl specifically?

Congrats on signing to Warner Records! What was the deciding factor on going with them?

My 1501 team and I were both in agreement with working with a global powerhouse and I’m happy it’s with Warner Records.

I feel like there’s a lot of Texas rap girls out here right now doing it big. There’s you, Big Jade, Queendom Come, Ken The Man, Megan Thee Stallion, and so many more. How does it feel to be part of this emerging Texas movement?

I love the Texas movement. I love Ken The Man. I love Lebra Jolie too. She actually did a “Buss It” challenge the other day. She’s from Houston. I love to see women, from my state, pretty much doing the same thing that I’m doing. You know, we all have the same goals. We all have the same dream. To see them doing their thing, too — it’s kind of exciting. Just to know that I’m not the only one out here doing my thing is pretty cool, too. I just love to be able to witness other women in my era doing what we’re doing, or doing what I’m doing, rather.

Since you and Megan Thee Stallion are on the same label, is there a chance that she might hop on “Buss It” or something with you in the future?

It’s all in God’s hands.

For sure. Now, you’re from Dallas. So, that’s really big for the city because we got Yella Beezy big popping, too. I know he was in your “Buss It” Challenge that you recently posted so I already know there has to be music recorded or on the way with y’all.

Oh yeah, we actually have a record dropping this month. We shot the video the other day. That’s actually what we were doing. Fans are asking for it. They’re excited, and I’m just as excited.

I saw you had the caption on the picture of you and him like, “Dallas, we got you.” What does it mean to have Dallas?

Also, you got that coveted Nicki Minaj follow! What did it feel like, in that moment, when you got that notification from Queen Nicki?

Oh, when I actually saw it on Twitter, I didn’t think it was real. I had to go to her Twitter just to make sure that it was really her. But it was. That was very exciting too because I never thought that, at least this soon, that I would get a follow up from somebody like Nicki. She’s my favorite female rapper ever. So, it was very exciting and unbelievable. It was just a very surreal moment for me.

Yes. Nicki is amazing, always will be. Out of all of the challenges that you’ve seen so far, which ones have been your favorites or perhaps the most wildest?

I would say Monica’s would be one favorite. It was very funny. It’s not what I expected. Also, Tracee Ellis Ross. Those two would probably be my top right now.

I know we’re in a pandemic and I know some places are you can still perform there, in certain parts of the states and stuff like that. Besides that, how do you plan on taking advantage of this momentum that you have right now, even though we’re still in a pandemic?

I kind of want to talk about Beatking, too, because he’s super supportive of women in rap! What’s your relationship with him been like?

What can we expect from Erica Banks in 2021?

New music, big features, bigger production, bigger everything, really. I always tell people to just stay tapped in and you won’t really miss a beat. I can’t even really tell you too much because everything is being planned out right now. We just kind of do things by the ear but they always come out great. So, I would just say, “Stay tapped in.”

How rates of interest impression your pockets