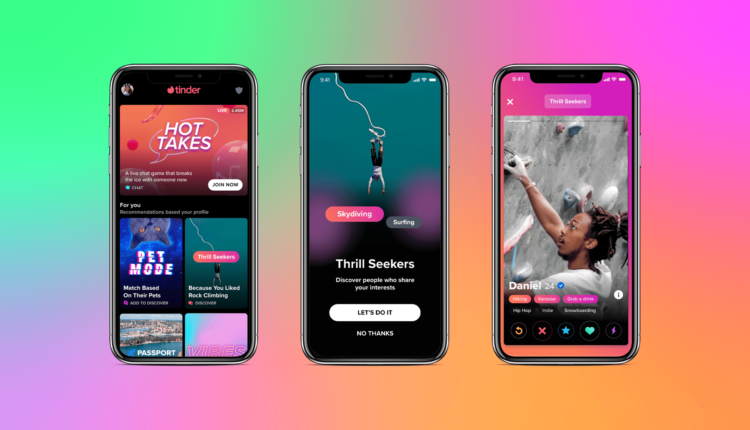 For the first time, Tinder is letting users chat before they match.

Users will first be shown some multiple-choice questions, such as: “Which of these is most pretentious? Bragging you don’t have TikTok, natural wine, saying your found something first or Oxford comma enthusiasts.”

Tinder will then drop them into a chat with another user who’s given similar answers.

The potential spouses can then talk before deciding whether to give one another a “Like” or a “Nope.” want to match with one another. But users will need to make their first impression quickly — they only get 30 seconds to make their choice.

For those of us who prefer a more leisurely pace of courtship, Tinder is also introducing a new section called Explore that provides different ways of meeting people.

The tab, which launches later this summer, lets users search for matches with similar interests. They’ll also find other Tinder features, such as Festival Mode, which is designed to connect people attending the same festival.

If you don’t have a cute puppy, glamorous vacation, or flawless physique to show off in your profile, Explore and Hot Takes could at least let you show off your inner beauty. But if your personality sucks, you might have better luck flaunting your physical gifts in another new Tinder feature: videos in profiles.

The app now lets users add up to nine clips to their profiles, which they can trim, crop, and preview before uploading.

Tinder said the new feature would be particularly suitable for Gen Z, which makes up more than 50% of the app’s global members:

Video gives Gen Z a new way to tell their authentic stories and represents the evolution of Tinder into a multi-dimensional experience that mirrors what dating looks like in 2021.

Tinder’s focus on younger users has a strong business case. When parent company Match fully acquired Hinge, a dating app with an older user base, it made sense for Tinder to concentrate on a different age group. But the new features could also make the online dating world a marginally less superficial place.

British-built solar powered drone can fly at 70,000ft for a YEAR