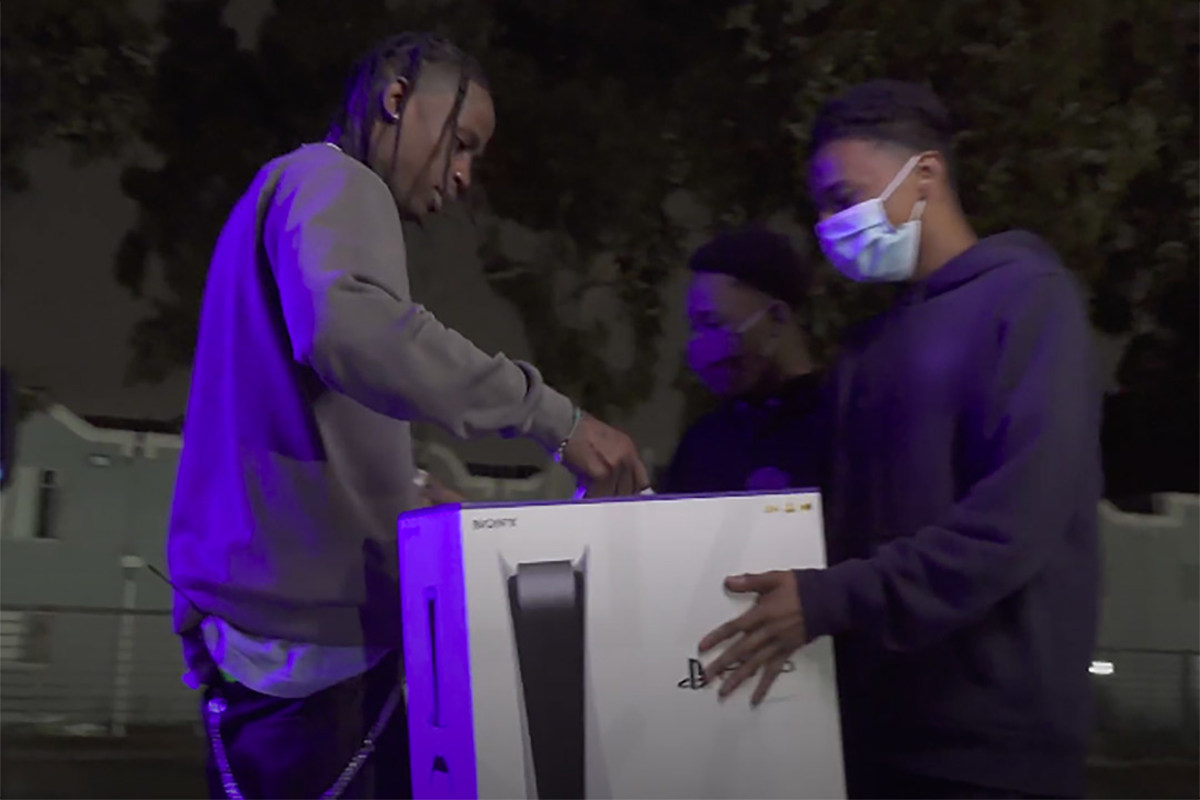 Travis Scott has taken his partnership with PlayStation to new heights and has gifted two fans with a brand new game console.

On Thursday (Nov. 12), La Flame shared a 10-minute long video on his official YouTube page titled “A Travis Scott + Cactus Jack Experience – PS5: Unboxing Reimagined,” which appears to serve as a promotional visual for the highly sought after gaming system. Nearly halfway through the video, two teenage boys from South Central, Los Angeles are briefly interviewed, but it’s clear that they’re unaware of what’s in store for them.

When asked what they’re expecting, one of the teens candidly admitted that he isn’t sure. The clip transitions to show a militaristic sprinter van with Travis Scott’s Cactus Jack logo painted on it. The PlayStation logo as well as the triangle, X, O, and square buttons that are on the game system’s controller are also on the van.

“It was unexpected,” the teen continued. “My mom just told me to get dressed and come on.” The other teen agreed with his friend and said he didn’t know what they were doing.

As they both approached the van, the teen boys noticed the PlayStation 5 logo, which heightened their excitement, despite them still being clueless about what was going to take place. They knocked on the door of the van and La Flame slid the door open and chuckled. He then surprised the teens with two PlayStation 5 gaming systems, which are currently sold out.

After giving the two young men a hug, Travis can be seen playing the PS5 with them individually. It’s unclear which game they were playing.

“He just popped out, like I was having mixed emotions,” said one of the teens. “I don’t know, I just couldn’t think at the moment. We look up to him as a person, as a role model, just because he came from where most of us came from. He makes music for us.”

The Astroworld rapper added, “I’m not gonna lie, it’s kinda crazy. Pull up, to be able to drop them off something special. Man, I wish somebody just showed up to my spot and gave me one of my favorite consoles. To be able to just make somebody smile on a random Friday.”

The former 2013 XXL Freshman surprising the teens with a PlayStation 5 comes days after he dropped his rather extensive merch collection with the company. The collection contains clothing, accessories and his special Nike Dunk Low Cactus Jack x PlayStation sneaker, which is not for purchase. The shoe was actually a giveaway item for five lucky winners.

Travis Scott was announced as PlayStation’s creative partner last month and it looks like his moves with the gaming system company aren’t letting up any time soon.

Travis surprising the teens with their own PS5 game consoles begins around the 3:50-mark below.