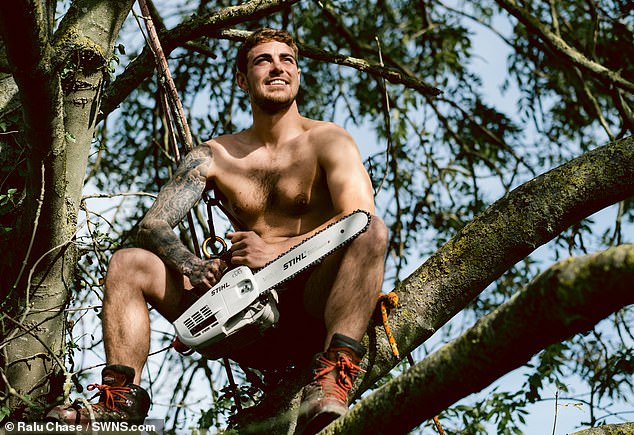 A group of well-meaning tree surgeons have decided to bare all in their comical semi-nude charity calendar for 2021.

Marvan’s Tree and Landscape Services, based in Ramsey, Essex, created the daring lumberjack poses in an effort to raise money for the North and Mid Essex branch of the mental health charity Mind.

Managing director Danny Marvan, 27, said that his team of 20 had a ‘brilliant’ time shooting for the calendar – posing with cleverly-placed power tools or potted plants in front of them.

Mr Marvan, from Dovercourt, Essex, said: ‘It was hilarious seeing the team wandering around the site with hardly any clothes on.

James Banks (pictured) was among group of tree surgeons from Marvan’s Tree and Landscape Services, based in Ramsey, Essex, who took part in the comical charity calendar 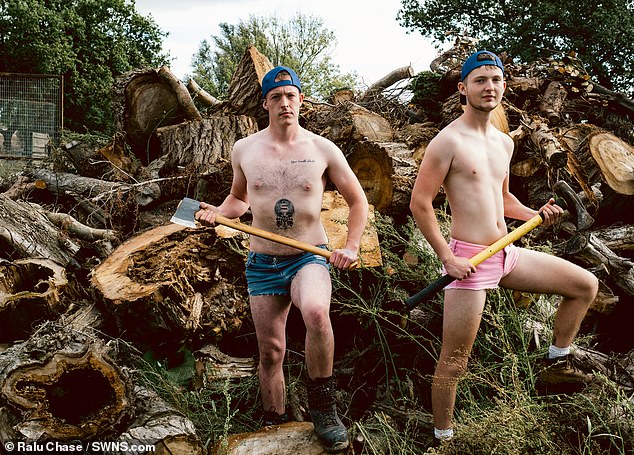 The group of 20 created the daring lumberjack poses in an effort to raise money for the North and Mid Essex branch of the mental health charity Mind. Pictured: Joe Tallis-Dent and Jarvis Moors from Marvan’s Tree and Landscape Services 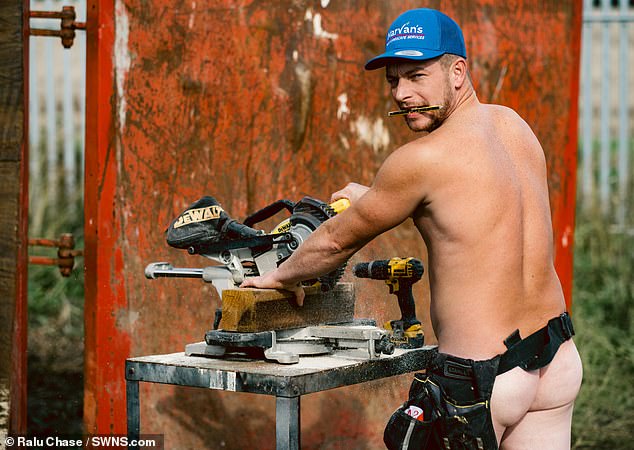 Some of the photographs saw the group of well-meaning tree surgeons pose with power tools. Pictured: Jon Soar from Marvan’s Tree and Landscape Services

‘Some of the ideas they were coming up with were brilliant. It was so funny. Everyone’s personality really comes through in their photographs.’

Mr Marvan said that not all of his team felt comfortable taking their clothes off – but they all got a chance to feature in the calendar.

He continued: ‘The highlight for me was a guy called Martin [Woodman], who is one of the older members of our team in his 60s.

‘He wasn’t camera-shy at all. He stripped down to nothing except his boots, and held this spindly little bay tree in front of his bits. He was so up for doing it.’

Mr Marvan, who masterminded the calendar idea along with finance officer Lisa Youngman, has had 1000 copies of the calendar printed.

He will be selling them for £10 each, with the proceeds going to the North and Mid Essex branch of mental health charity Mind.

Managing director Danny Marvan (pictured), 27, from Dovercourt, Essex,  said that his team had a ‘brilliant’ time shooting for the calendar 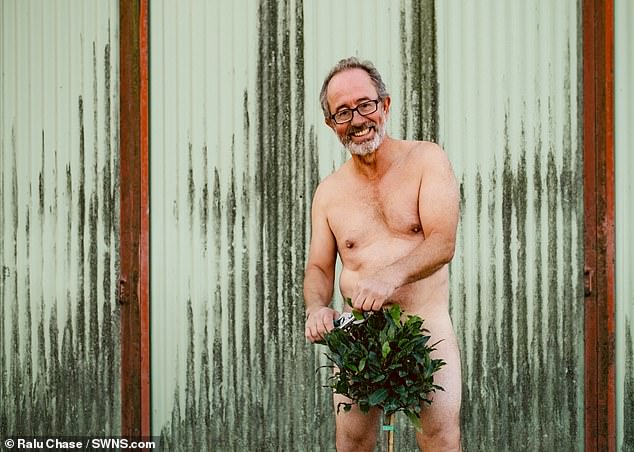 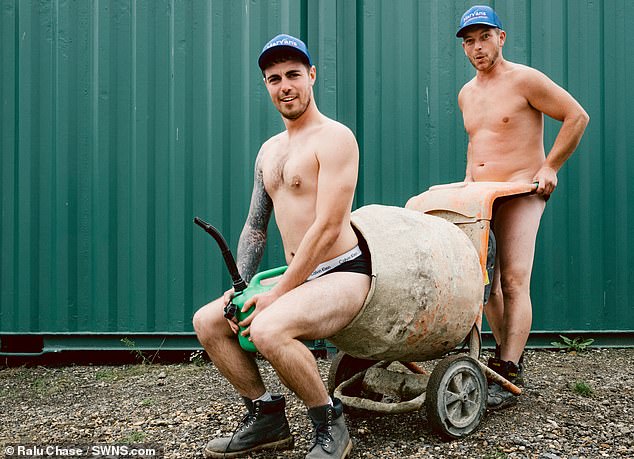 Mr Marvan described how everyone’s personalities came through in the photographs and they all got a chance to feature. Pictured: James Banks and Jon Soar 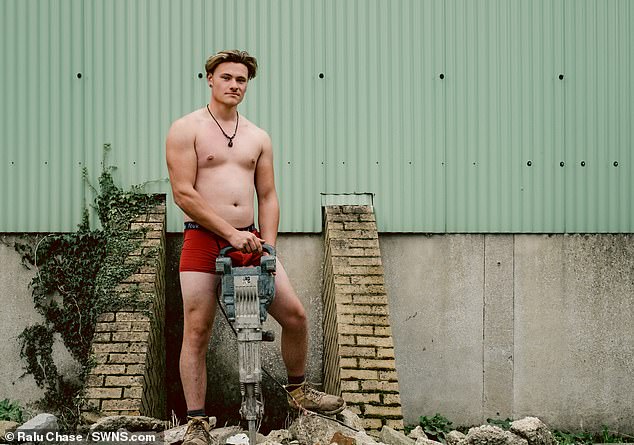 The managing director said he is passionate about ensuring his workforce of 20 staff are safe, as their jobs can be dangerous, with many risks involved – and their mental wellbeing comes into that package too.

He said: ‘Mental health and Mind is a charity and a cause close to our hearts.

‘We are focused on ensuring our team’s mental health is as well cared for as the grounds and gardens we maintain.

‘Some of my team have said to me that in their previous jobs they would be told to ‘man up’ if they had any concerns about anything.

‘But here, I really listen to my staff, and they respect me because they feel like they can come and talk to me about things.

‘I want this site to feel like their second home. Without them, I wouldn’t have this company. 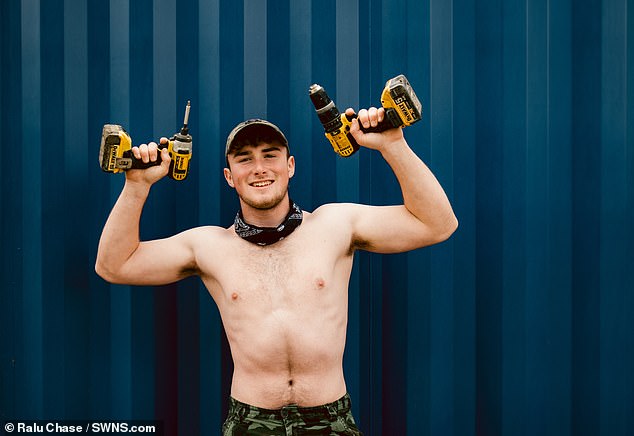 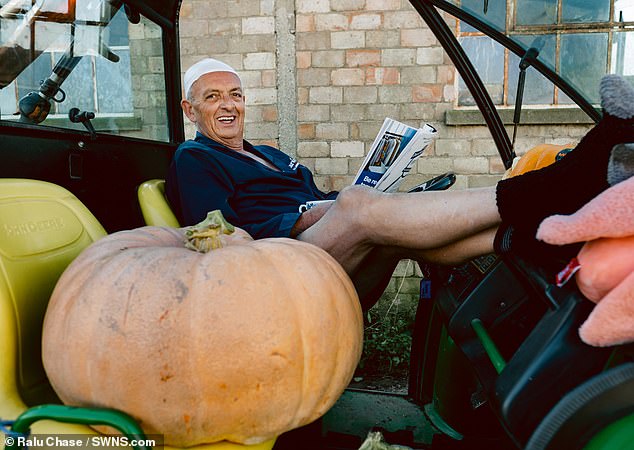 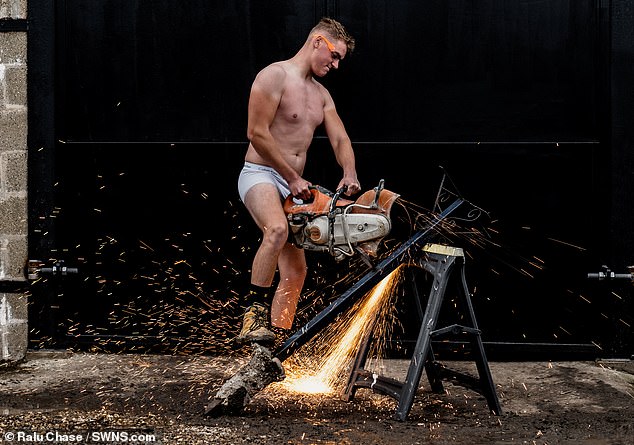 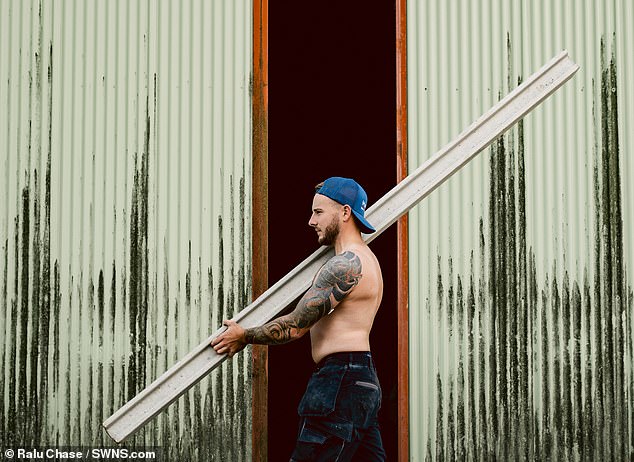 Mr Marvan described how he wanted his site to feel like a second home for the tree surgeons who work for him. Pictured: Todd Holloway from Marvan’s Tree and Landscape Services 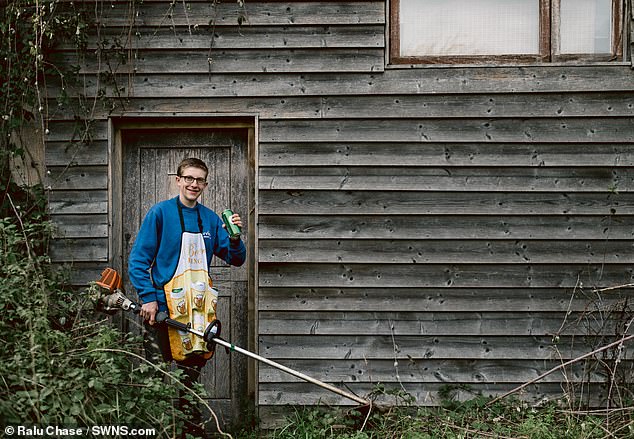 ‘We hope that the 2021 calendar, along with messages from each of the team, offer inspiration to anyone who finds themselves struggling. You are never alone.’

A spokesman from Mind said: ‘We are really grateful to Marvan’s for choosing to support our charity this year with their staff calendar.

‘What a great way to broach the subject of mental health whilst supporting our service in the area.

‘Sadly in the UK, suicide is one of the leading causes of death in men under the age of 45.

‘So it’s great to see a company like Marvan’s breaking the stigma and openly talking about mental health.’

To buy a copy of the Marvan’s charity calendar, visit their website at: https://www.marvans.co.uk/.