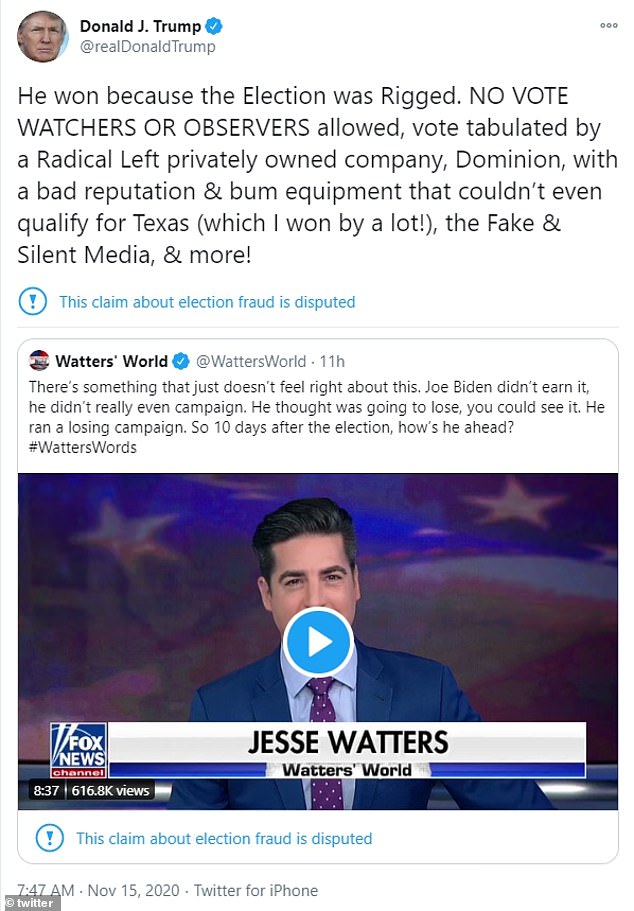 BREAKING NEWS: Donald Trump admits for the first time that Joe Biden won the election, but immediately launches into Twitter tirade questioning the results as he repeats it was ‘stolen’ by Democrats

Donald Trump finally admitted Sunday morning that Joe Biden won the election more than a week after most major outlets called him the winner.

‘He won because the Election was Rigged,’ Trump tweeted in reference to his Democratic rival. ‘NO VOTE WATCHERS OR OBSERVERS allowed, vote tabulated by a Radical Left privately owned company, Dominion, with a bad reputation & bum equipment that couldn’t even qualify for Texas (which I won by a lot!), the Fake & Silent Media, & more!’

He clarified in a tweet sent an hour later that he is still not ‘conceding’ to Biden, despite what his earlier tweet may have suggested.

‘He only won in the eyes of the FAKE NEWS MEDIA,’ he wrote. ‘I concede NOTHING!’

‘We have a long way to go. This was a RIGGED ELECTION!’ the president added.

Last Saturday, Biden declared himself the victor after projections showed him ahead in enough states with enough Electoral College votes to win the presidency.

Since then, Trump has refused to concede and has just upped his attacks on the election process this year, which included expanding mail-in ballot measures in the midst of the coronavirus pandemic.

The president, however, also immediately questioned the integrity of the elections, claiming Democrats ‘stole’ the win for Biden

The president immediately launched a Twitter tirade Sunday morning that continued his attack on the ‘scam’ election as he claimed there are several factors that contributed to Democrats ‘stealing’ the election for Joe Biden, including allowing the ‘sick joke’ of mass mail-in voting.

‘All of the mechanical ‘glitches’ that took place on Election Night were really THEM getting caught trying to steal votes,’ he said of Democrats. ‘They succeeded plenty, however, without getting caught. Mail-in elections are a sick joke!’

Trump’s campaign has launched several legal challenges in a few different battleground states related to the election and how ballots were tabulated.

Specifically, he has filed lawsuits in Pennsylvania, Michigan, Wisconsin and Georgia, among others.

The president also lashed out on Sunday against Georgia, which several major media outlets projected for Biden on Friday as final votes were counted. 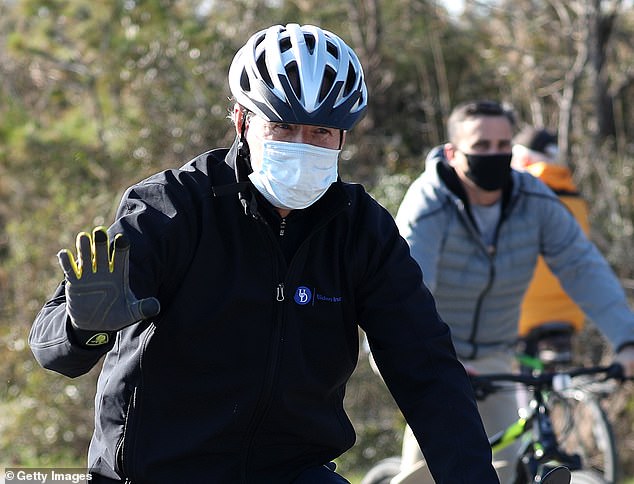 Joe Biden has been staying at a vacation home in Rehoboth Beach, Delaware as he works on his transition. Here he is seen taking a bike ride on Saturday in Lewes, Delaware – near the vacation home

Republican Representative Doug Collins of Georgia is spearheading the recount efforts there, which Trump’s campaign launched last week even before canvassing in the state was completed.

Trump, however, said the recount ‘means nothing’ because the fraud and ‘cheating’ was so widespread that a recount is unlikely to change the results.

‘Doing a great job in Georgia,’ Trump lauded Sunday morning before launching his attack. ‘Their recount is a scam, means nothing. Must see fraudulent signatures which is prohibited by stupidly signed & unconstitutional consent decree.’

Friday projections showed Joe Biden winning Georgia by only 0.3 per cent, amounting to just a bit more than 14,000 votes.