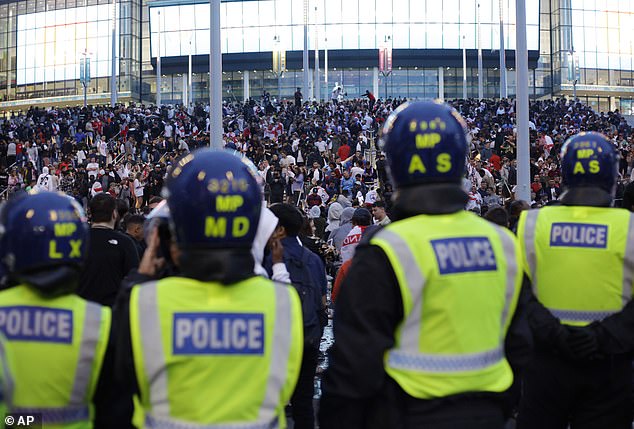 By Gemma Parry For Mailonline

Two men have been arrested on suspicion of stealing items which helped football fans without tickets to storm Wembley Stadium on the night of the Euro 2020 final.

Metropolitan Police has said the men, both 18, are suspected of taking items and sharing them with others to allow them to get into Wembley to see England face off against Italy in the final.

Investigators have refused to disclose the nature of the objects that were allegedly stolen.

It comes after police pledged to investigate offences by fans in the build up to the final last weekend, which resulted in a breach of security at Wembley Stadium.

The men, from Ilford and Newham, have been released under police investigation for theft.

It comes after police pledged to investigate offences by fans in the build up to the final last weekend, which resulted in a breach of security at Wembley Stadium.

Footage showed hoards of fans streaming up Wembley’s outer stairwells ahead of the match on Sunday evening.

Security were seen ‘tackling people to the ground’ according to one eyewitness in the stadium.

By half time, with England ahead 1-0, the situation had calmed, the eyewitness said, but it is thought that around 300 people were trying to get through the barriers at one point.

Some people inside the stadium said there had been fans standing on the concourse for the entire first half of the match, which ended in a 3-2 penalty shoot out, which saw Italy crowned the winners.

Police have said there were 45 arrests on the night of the game.

Former Met deputy assistant commissioner Andy Trotter said fans behaviour at the final between England and Italy was ‘disgusting’ but it was ‘simplistic’ to solely blame the police.

‘When one reads through the accounts… there’s a whole catalogue of issues that need to be addressed,’ he told Times Radio.

‘I think just to pin it on the police is a bit simplistic because quite clearly there were failings everywhere.

‘I’m not trying to defend anyone here because it was an awful, awful event and a real stain on our country’s reputation.’

He added that alcohol has become a ‘major problem’ at matches.

‘Those people performing last Sunday are the same ones that perform in every town centre across this country on a hot Saturday night,’ he said.

‘Tonight, all over the country those same people will be out getting drunk, getting drugged up and causing huge amounts of problems.’

By July 13, 897 football related incidents and 264 arrests had been recorded across the country in the 24-hour period surrounding the final.

The total number of football related incidents during the tournament was 2,344, with 630 arrests.

Since the final, a further five people have been arrested over their alleged racist social media posts targeting members of the England squad.

It prompted the Government to announce changes to the terms of the football banning order regime which covers online racism.

Banning orders exclude people from attending matches for between three and 10 years.