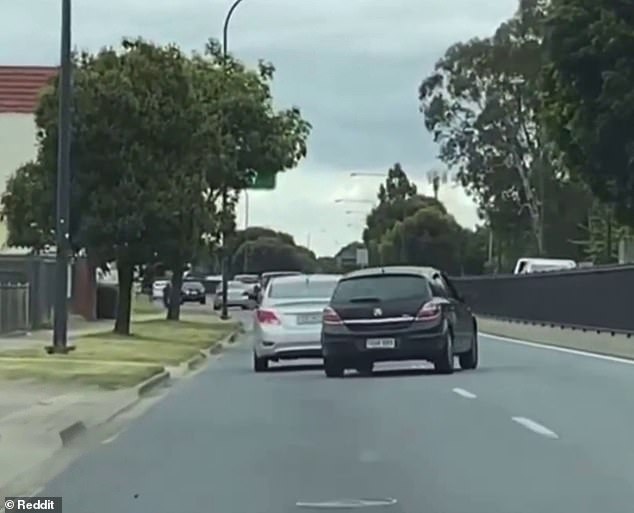 Two road-rage drivers have narrowly avoided a huge crash after battling to overtake each other on a busy road.

A video shows a motorist in a black Holden Astra quickly swerving in front of a silver sedan travelling in the adjacent left lane on Adelaide‘s South Road.

‘Woah!’ the passenger filming in a car travelling behind says.

The silver sedan is forced to hit its breaks before abruptly swerving across into the right lane to avoid a crash.

But as the sedan goes to move right, the driver in the black Astra opens the door to try and block the vehicle from passing.

The silver car manages to pulls ahead then crosses back into the left lane while the Holden tries to cut it off.

The black car tries to swerve into the silver car to prevent it from passing, before moving into a right exit lane while flipping the other driver the bird.

Desperate to have the last word, the sedan swoops into the exit lane to cut off the Astra.

‘Should we follow them?’ the driver asks her passenger.

‘No definitely not,’ she replies, as they continue straight down the motorway.

Many commenters on Reddit where the video was shared slammed the drivers’ behaviour as foolish.

‘Jesus. Both of these drivers should lose their licence. Neither of them have any sense,’ one person wrote. 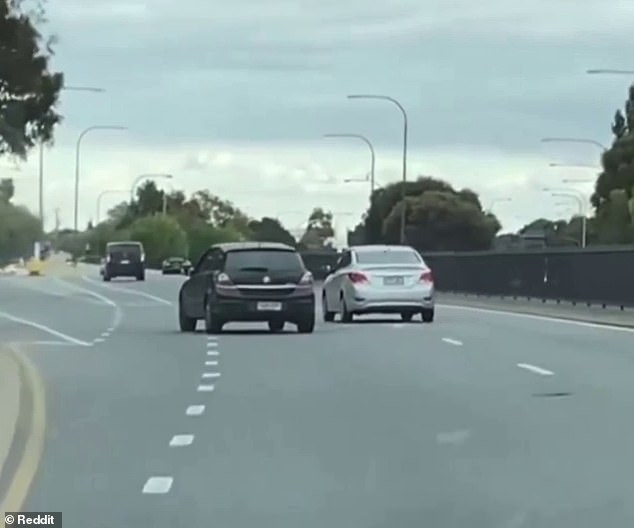 ‘Here we see two alpha idiots fighting for control over the idiot horde,’ another added.

One person speculated as to whether the two drivers were friends playing a game.

‘It almost seemed like two buddies just messing with each other,’ they wrote.

Others were unsurprised, saying that erratic driving was common in Adelaide.

‘This is Adelaide mate. They don’t have anywhere better to be or they wouldn’t be living there. This is probably their weekly joy ride,’ one comment read.

‘That’s Adelaide driving for you!’ another person wrote.

Quick ways to make money from any business