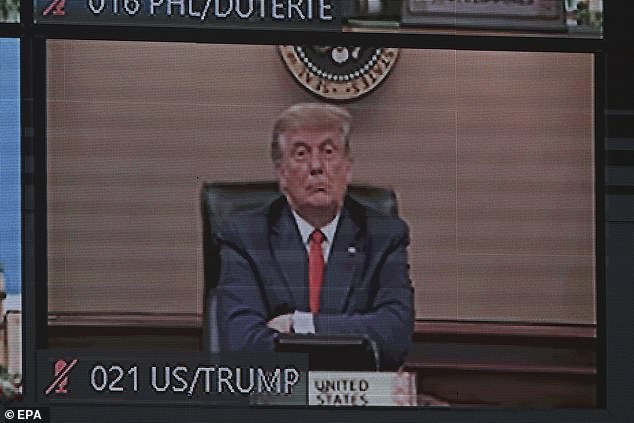 President Donald Trump spent Friday morning blasting tweets that touted his chances for overturning the election even as his top staff, including Jared Kushner and Ivanka Trump, have reportedly abandoned him in his attempts to legally change the results.

‘We have great support on the Election Hoax!,’ Trump wrote in one of dozen tweets, many of which were flagged by Twitter for having incorrect information.

‘The Election was a HOAX,’ he charged.

Trump is making an increasingly desperate bid to stay in the White House after a disastrous news conference by his legal team on Thursday, a completed hand recount in Georgia confirming Joe Biden‘s win in that state, and losses in three more court cases.

Biden lawyer Bob Bauer said Friday morning there ‘is no chance whatsoever that Trump can be successful’ in his attempt to overturn the Democrat‘s victory.

Many Trump advisers believe privately that Rudy Giuliani, Trump’s personal attorney, and his team’s case will go no where, Axios reported, and that includes Kushner and Ivanka Trump, the president’s daughter and son-in-law who serve in the White House. 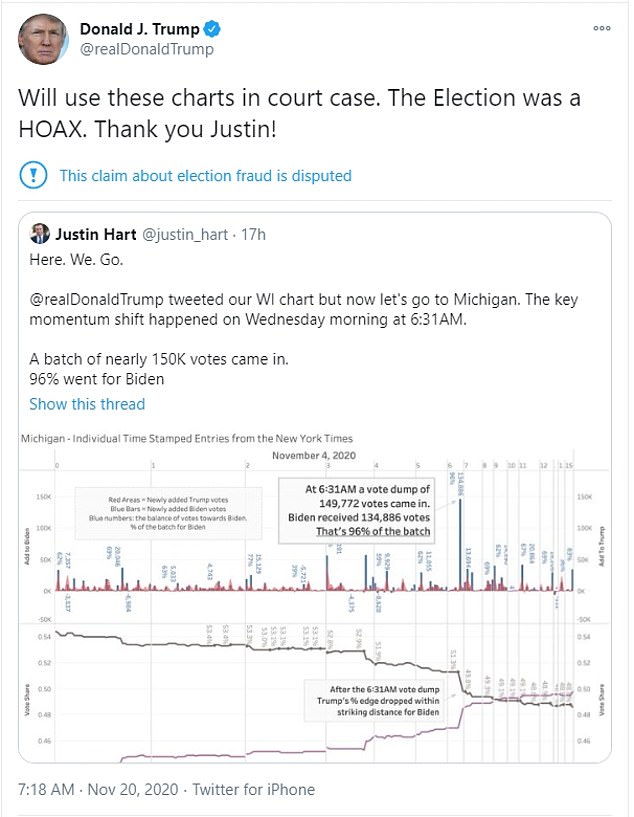 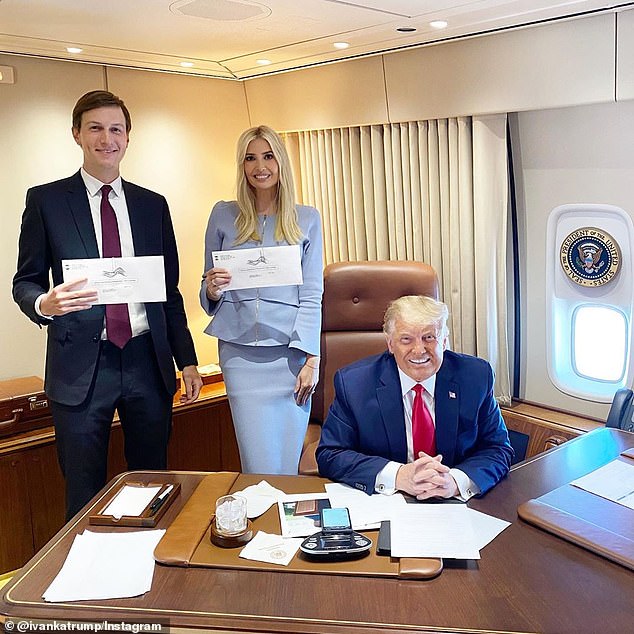 Some of Trump’s top aides, including Jared Kushner and Ivanka Trump, his daughter and son-in-law who serve in the White House, are abandoning the president’s legal big – above Jared and Ivanka are seen with the president, posing with their mail-in ballots for the election

The powerhouse couple has been publicly silent on the president’s legal bids to try and overturn results in the battleground states as they continue their work in the White House.

But other Republicans have not.

‘It is difficult to imagine a worse, more undemocratic action by a sitting American President,’ Republican Sen. Mitt Romney of Utah said of Trump’s actions.

Trump tweeted that Romney is a ‘RINO’ – a Republican in Name Only – and seemed to indicate that the 2012 election results – where Barack Obama beat Mitt Romney with 332 electoral votes to Romney’s 206 – were false.

‘I’m sure, however, that he feels he got slaughtering by Obama ‘fair and square,” the president wrote.

He and Romney are longtime foes. Romney voted in favor of one of the impeachment counts against Trump, who was acquitted by the Senate at large, sparking the feud between them.

But other Republican senators are starting to speak out.

‘After counting every valid vote and allowing courts to resolve disputes, it is important to respect and promptly accept the result,’ said retiring Republican Senator Lamar Alexander of Tennessee. 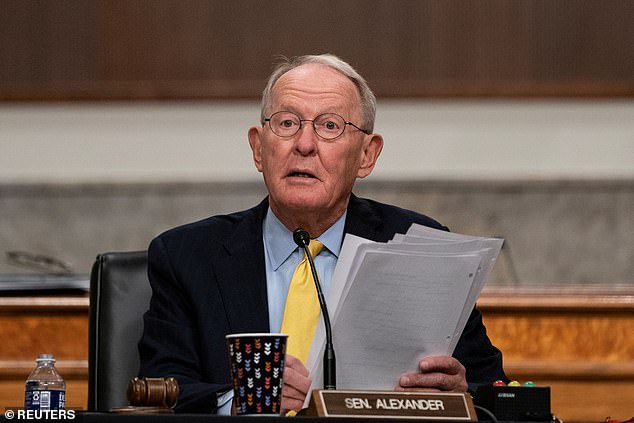 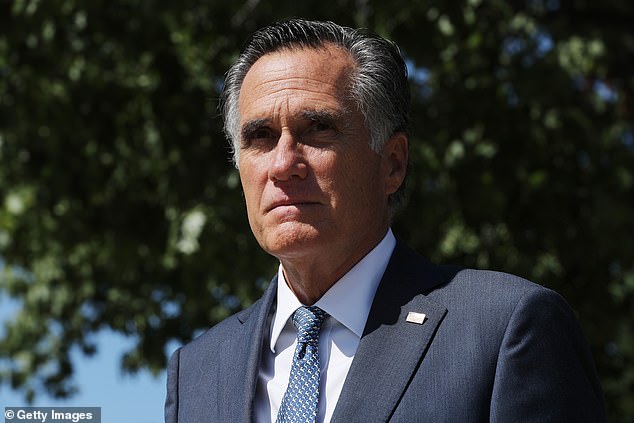 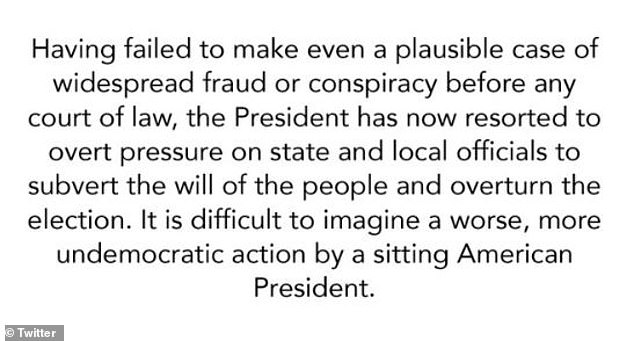 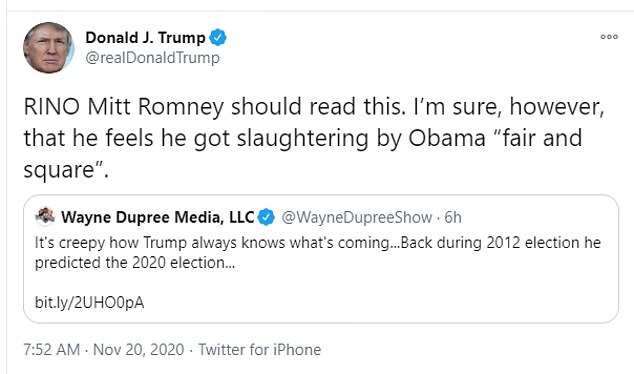 Trump is meeting with Michigan Republicans at the White House on Friday as part of his frantic, long shot attempt to overturn the results.

The meeting isn’t on the president’s public schedule, which is not reflective of all his daily activities, but comes as Trump is said to be obsessed with figuring out a way to stay in the White House.

Trump had already personally thanked the two Detroit, Michigan Republicans -for their support in the hours before they changed their minds and tried to rescind their certification of Biden‘s victory in their county.

‘I hope they wear masks and I hope they stay safe,’ Democratic Gov. Gretchen Whitmer of Michigan said of Chatfield and Shirkey’s visit. ‘All the meetings in the world, though, can’t take away from the fact that Joe Biden won Michigan by over 150,000 votes.’

Biden won Michigan 51% to Trump’s 48% or by 154,000 votes, according to the current unofficial results. All 83 counties have approved their tallies and the state is expected to start the certification process on Monday.

The president and his allies appear to be pursing the questionable legal theory that if the states don’t certify the election results, the Republican-controlled state legislatures can intervene and appoint pro-Trump electors in states Biden won. Those electors would cast their ballot for Trump when the Electoral College meets on Dec. 14 – thereby handing him the presidency.

Election experts say there is no scenario in which this could happen and even some Republican lawmakers in those states have dismissed the idea.

Biden has brushed aside concerns Trump’s efforts will undermine his forthcoming administration but did express concern about what it would do to American democracy.

‘It’s hard to fathom how this man thinks,’ Biden said during a press conference in Wilmington on Thursday. ‘I’m confident he knows he hasn’t won, and is not going to be able to win, and we’re going to be sworn in on Jan 20.’

Trump’s efforts are increasingly being seen as grasping at straws in his unlikely attempt to overturn Biden’s victory.

In Pennsylvania, his legal team suggested in a filing Wednesday that the judge order the Republican-led state legislature to pick delegates to the Electoral College in a bid to toss the state’s 20 electoral votes to Trump. A judge canceled an evidentiary hearing in the case.

In Arizona, the Republican Party is pressuring county officials to delay certifying results. The GOP lost a bid on Thursday to postpone certification in Maricopa County, the state’s biggest county. Biden won Arizona by more than 10,000 votes, and Maricopa County put him over the top – making him the second Democrat in seven decades to carry the state. 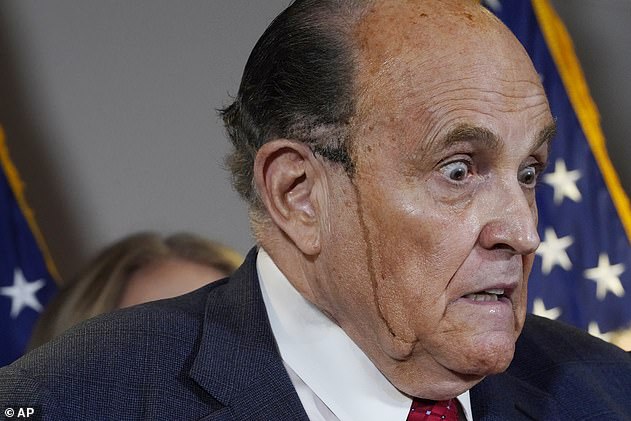 Rudy Giuliani, one of Trump’s lawyers, held a bizarre press conference on Thursday where he alleged voter fraud but showed no proof as what appeared to be hair dye ran down his face 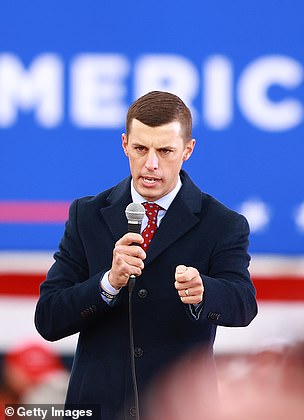 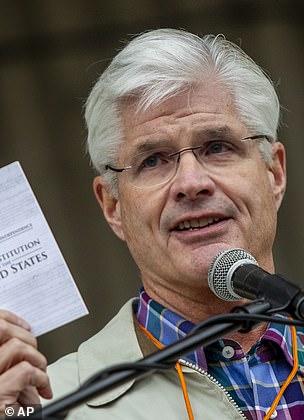 Speaker of the Michigan House of Representatives Lee Chatfield and Senate Majority Leader Mike Shirkey, both Republicans, and visit Trump in the White House Friday

Trump’s efforts are looking increasingly for not.

Election experts say he has no chance to flip the results, Georgia confirmed Biden’s win after a hand recount of its ballots and the president lost three legal bids in battleground states in one  day on Thursday.

And, in the latest bit of Trump strategy, in a bizarre press conference at the Republican National Committee headquarters on Thursday, Trump attorneys Rudy Giuliani, Jenna Ellis and Sidney Powell presented their argument for widespread voter fraud but provided no evidence.

The self-styled ‘elite strike-force team working on behalf of the president’ outlined a conspiracy which wove together Hugo Chavez; China; Venezuela; Cuba; the Clinton Foundation; George Soros; testimony found ‘on the internet’; ballots which arrived in trucks; New Jersey voters who crossed the Camden; ‘hack’ judges; vote counters in Germany and Spain; Democratic political machines just like Mayor Daley in the 1960s; the ‘fake news media’; and Joe Biden.

‘We cannot allow these crooks — ’cause that’s what they are — to steal an election from the American people,’ Giuliani said. ‘They elected Donald Trump; they didn’t elect Joe Biden. Joe Biden is in the lead because of the fraudulent ballots, the illegal ballots that were produced and that were allowed to be used after the election was over. Give us an opportunity to prove it in court and we will.’

The press conference was seen as something of a farce with what appeared to be black hair dye rolling down both sides of Giuliani’s face as he spoke.

Lagos to reform bus segment, to phase out one-bus ownership