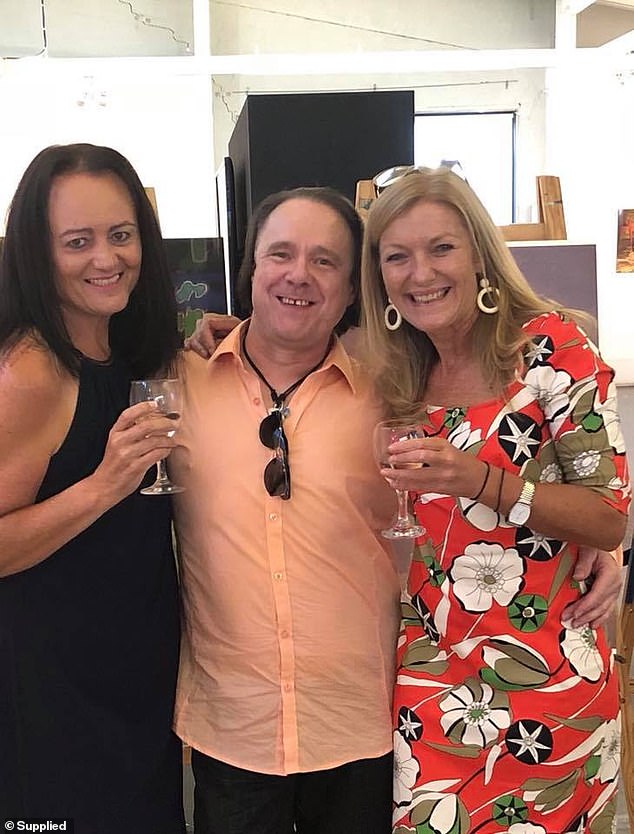 A charity founder honoured with one of the nation’s highest accolades has gone to police after a former friend took offence at being called a ‘mansplainer’.

Donna Stolzenberg lodged an intervention order against Melbourne artist Jonathan Goodfellow on Friday after receiving a series of messages from him demanding an apology.

Mr Goodfellow claims he was left ‘traumatised’ when Ms Stolzenberg ‘crossed the line’ and placed him in the ‘mansplainer camp’ after he responded to a Facebook post about murdered Melbourne woman Courtney Herron on August 19.

A ‘mansplainer’ is a man who feels entitled to explain how the world works, especially to women. 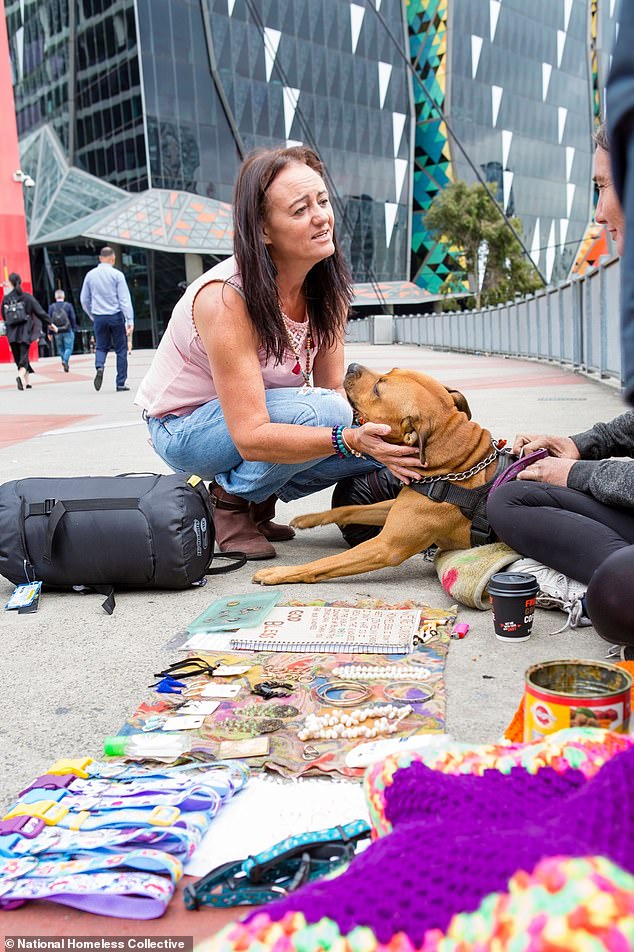 Donna Stolzenberg has helped the homeless and victims of domestic violence across Melbourne for years. She was recently honoured with Victoria’s Australian of the Year for 2021 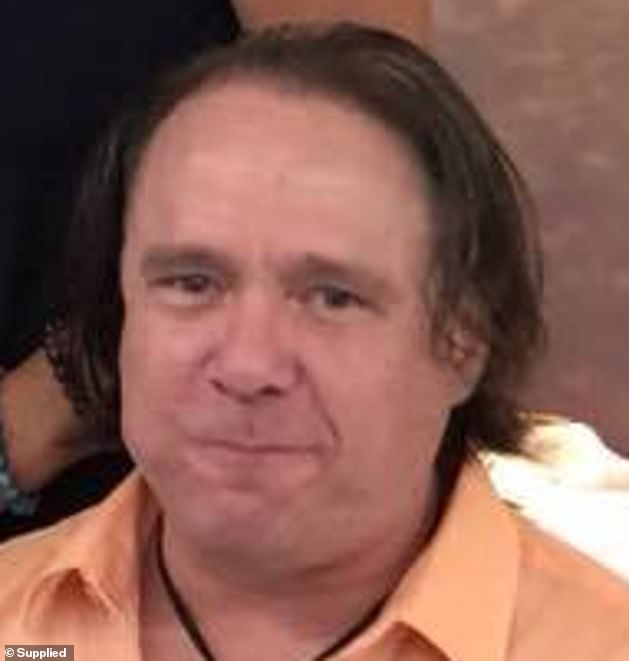 ‘When I tried to clarify a post around a hideous deplorable murder she described me as “mansplaining”,’ he told Daily Mail Australia.

‘I’ve only sent her a couple of texts asking for an apology so let her make those accusations they won’t be borne out by the facts,’ he said.

Mr Goodfellow initially responded to the criticism in good-hearted nature.

‘I steel myself from taking offence,’ he wrote.

But Ms Stolzenberg, who was named Victoria’s Australian of the Year for 2021 on October 27, claimed the artist turned on her days after she took home the award.

Mr Goodfellow had demanded a public apology and issued a threat to launch a defamation case against her should she fail to comply.

What followed was a series of messages and emails, each of which became increasingly demanding.

‘Jonathon started to send personal messages, again demanding I contact him and demanding I give him a public apology,’ she said.

‘He said he had sought legal advice and would sue me for defamation if I refused his demands to contact him.’ 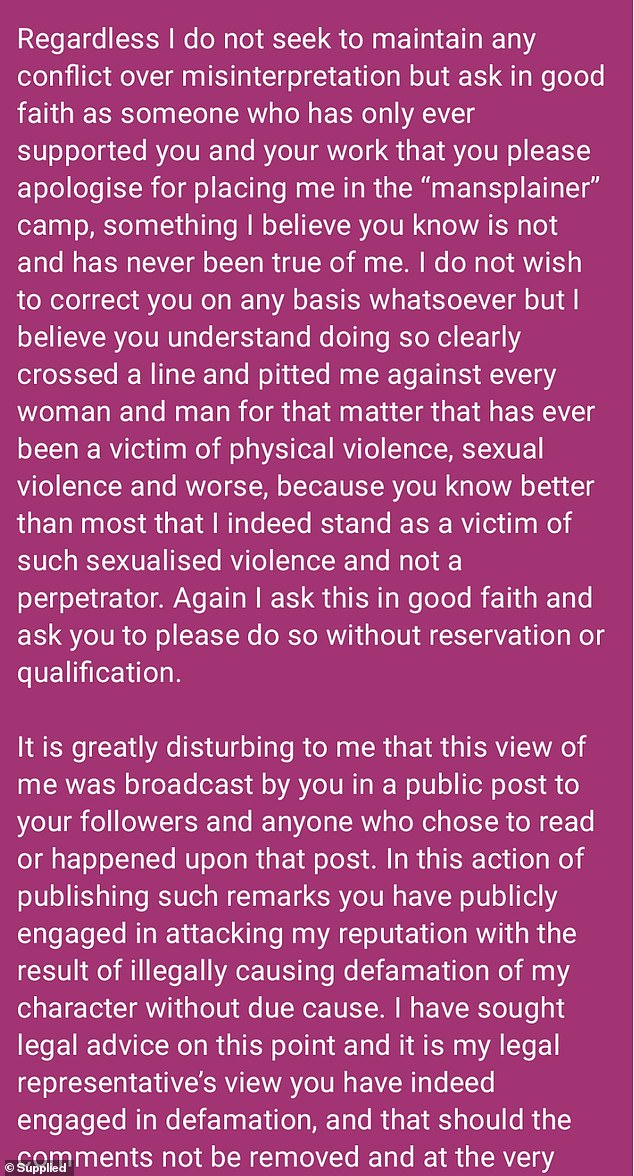 One of the messages Mr Goodfellow sent to Ms Stolzenberg 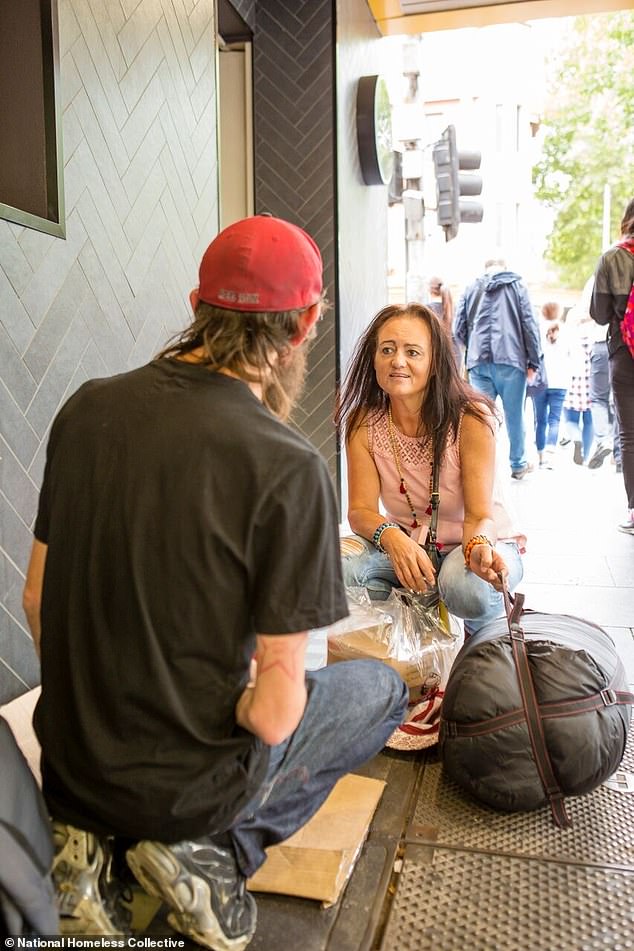 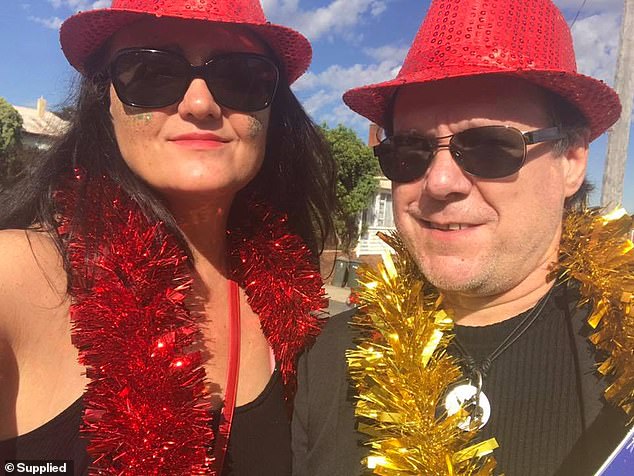 Victoria’s Australian of the Year for 2021 winner Donna Stolzenberg and Jonathon Goodfellow in happier times. 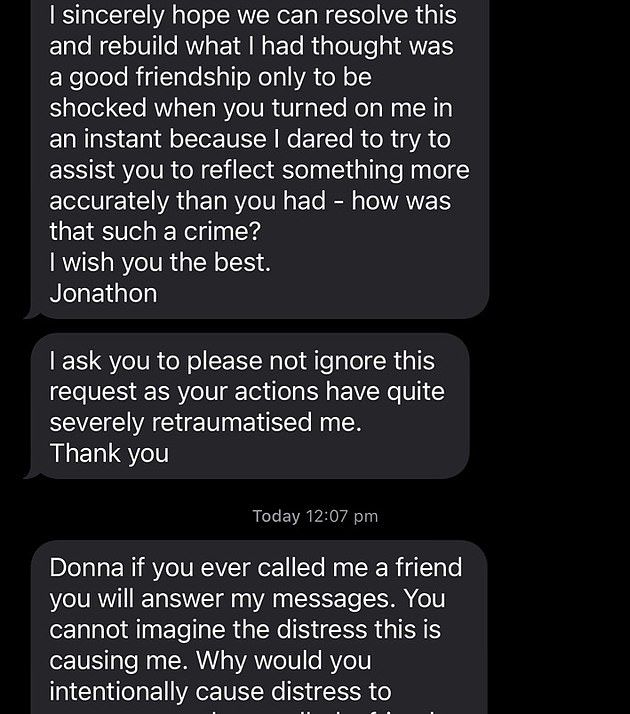 Some of the messages sent by Jonathan Goodfellow to Donna Stolzenberg

A proud indigenous woman and founder and CEO of the National Homeless Collective, Ms Stolzenberg has dedicated much of her life helping women escape men.

She had once regarded Mr Goodfellow a friend, but believes the messaging has gone too far.

‘I decided it would be best to ignore him but he kept persisting and then started to message my friends,’ she claimed.

He refused to answer the phone when contacted, but defended himself over a series of text messages. 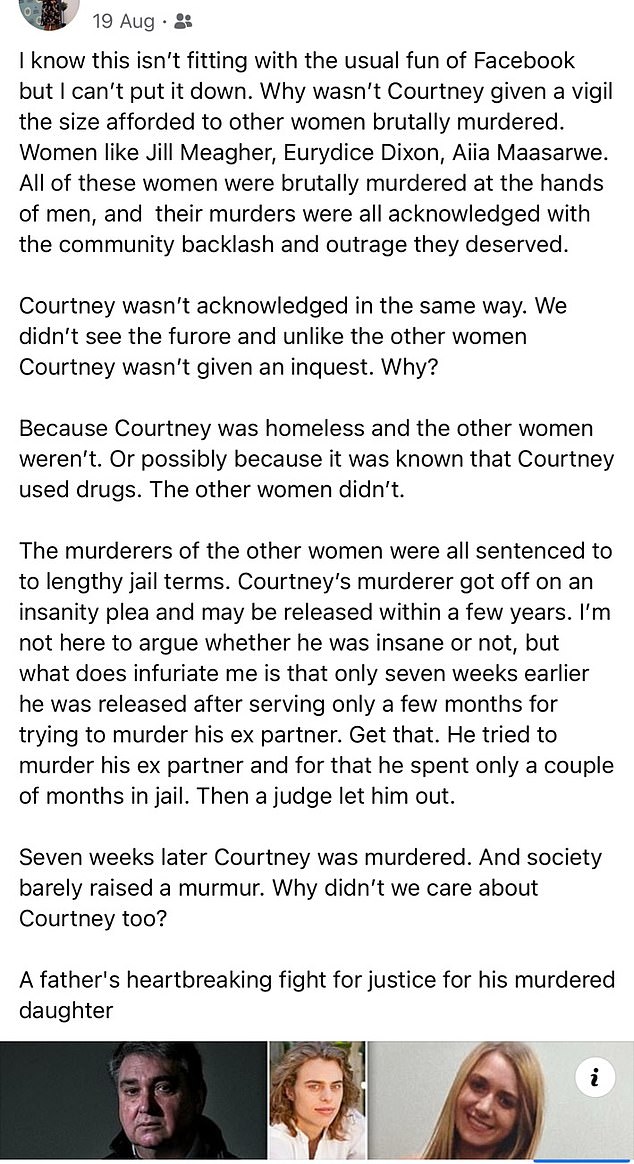 How it began. Donna Stolzenberg hit out at the the public’s reaction to the murder of homeless woman Courtney Herron 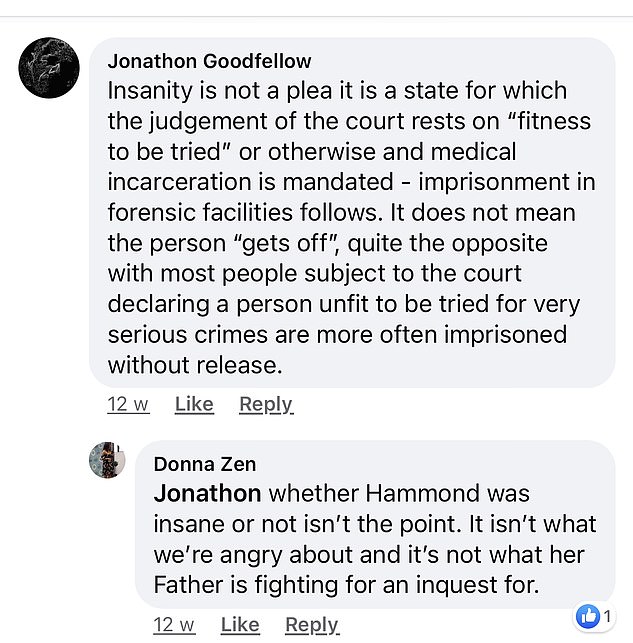 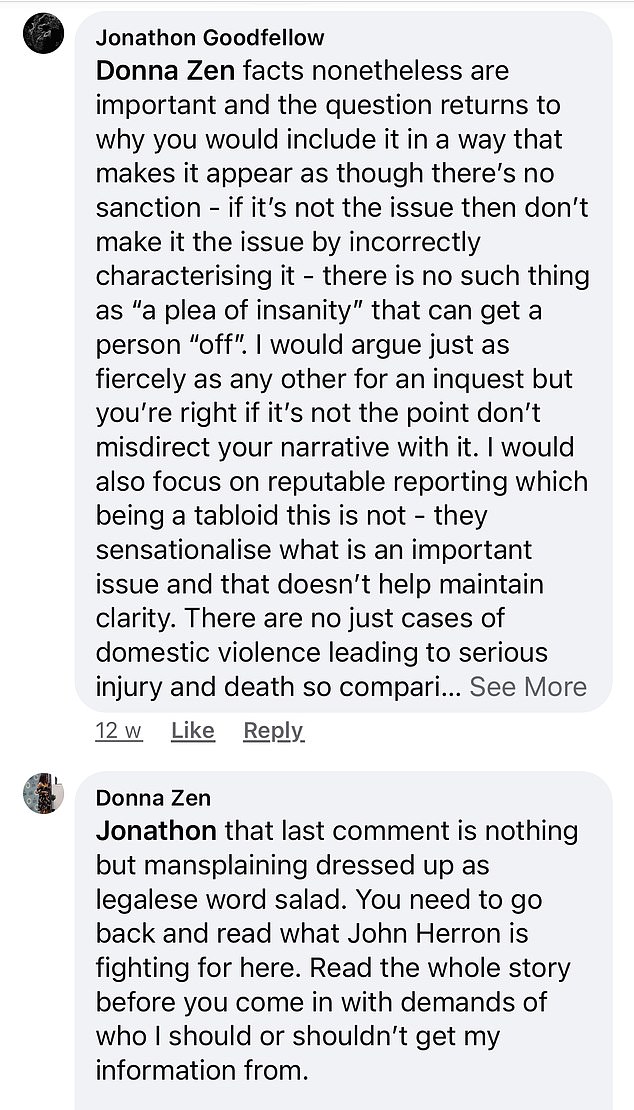 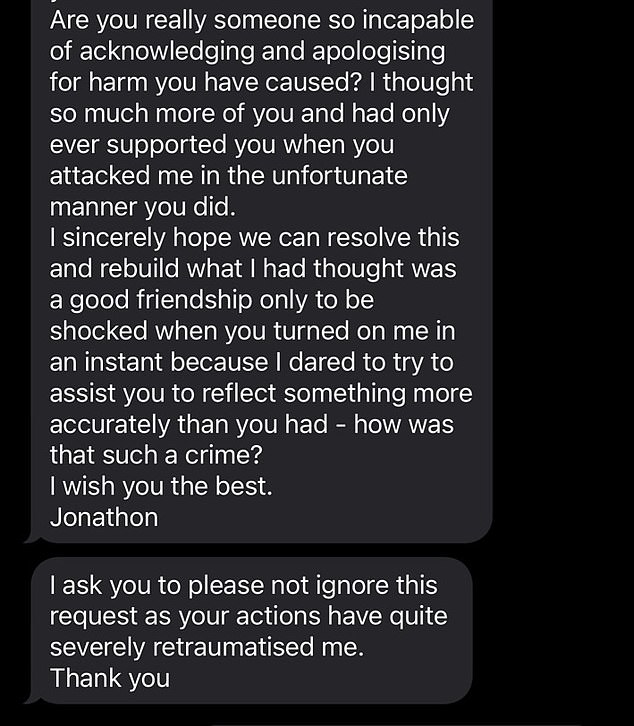 Mr Goodfellow applauds himself for his ‘community advocacy roles’ on an arts  website profiling him.

‘In 2013 the RC into Institutional Child Sex Abuse began & Jonathon gave evidence in 2015. Reckoning his past returned him to full time arts practice, not despite but because of his PTSD,’ it states.

Ms Stolzenberg has been targetted several times throughout this year online, some of which came after her when she caught someone ripping off her charity.

While those messages caused Ms Stolzenberg many sleepless nights, the messages from her former friend have troubled her enough to seek police intervention.

‘I devote my life trying to help all victims of family violence and people experiencing homelessness,’ she said. 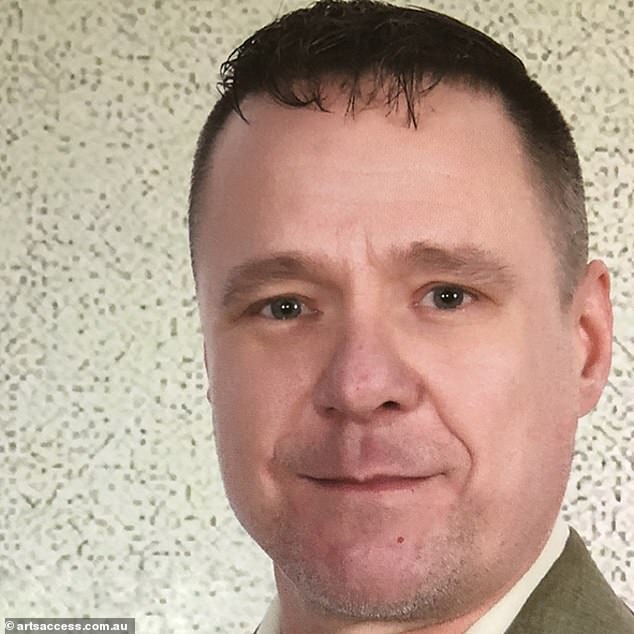 Jonathon Goodfellow has taken offence to being called a ‘mansplainer’

‘That is bizarre – how is it an allegation when I’m not even aware of it and my contacts with her are asking her to apologise to me for attacking me online – so what proof does she have? I’ve only sent her a couple of texts asking for an apology so let her make those accusations they won’t be borne out by the facts.’

‘I am a survivor of childhood sexual abuse and a person living with complex PTSD and when I tried to clarify a post around a hideous deplorable murder she described me as “mansplaining” and I unfriended her so any allegation of me using a carriage service to harass is a complete misrepresentation of the facts – I do not give permission for any of this to be published because I do not know the context – I was attacked by her and I unfriended her and asked for an apology and she has then gone to the press?’

‘What award? I’m not even aware of any award.’

‘What posts? I have not written one post about this issue. The texts are all of 3 asking for an apology. Are you publishing something about me and this issue?

‘I am not a troll. I have sent texts asking for an apology and I have not trolled anyone – it is deplorable behaviour.’

‘I have not posted or published anything or made any public comment about this issue so how does that constitute trolling? You will be wilfully misrepresenting me if you publish anything stating I have trolled anyone. I believe the original post is no longer online either. And again I have never given you permission to publish anything about me or anything said herein.’

‘It is not trolling to state I believe you will be misrepresenting me by publishing my name in relation to this issue. Trolling is attacking peoples character or being abusive. My responses to contact you initiated is not trolling.’