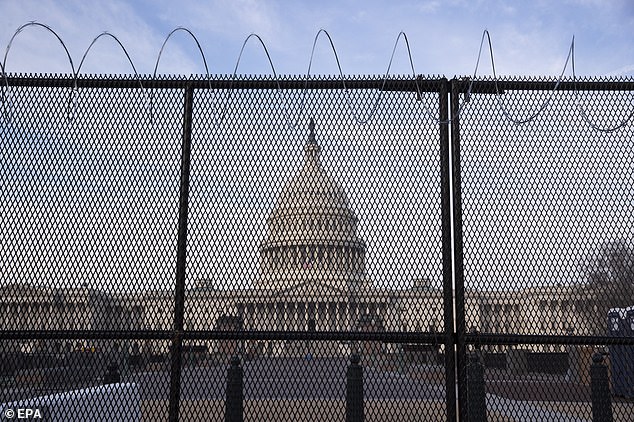 US Capitol Police arrest a Virginia man with fake inaugural credentials, a loaded handgun and more than 500 rounds of ammunition trying to get through a checkpoint in DC

By Rachel Sharp For Dailymail.com

A Virginia man has been arrested for allegedly trying to enter through a Washington DC checkpoint armed with a gun, 500 rounds of ammunition and fake credentials, according to a report.

Wesley Allen Beeler, from Front Royal, Virginia, was arrested Friday evening as he tried to make his way through security checkpoints in downtown DC that have been erected ahead of Joe Biden‘s inauguration, CNN reported.

The outlet cited a police report and a law enforcement source which said Beeler drove his pick-up truck to a police checkpoint at North Capitol and E Street NE close to the Capitol building which just one week ago was the site of a violent siege that left five dead.

He then allegedly showed officers fake inauguration credentials in an effort to get inside the perimeter.

Officers asked the suspect if he had any weapons and he admitted he was carrying a Glock semi-automatic pistol in the armrest of his truck, CNN reported.

Police uncovered the handgun and found it was pre-loaded with 17 rounds of ammunition and a round chamber ready to fire, the source said.

A police report seen by the outlet states that officers later found the pistol, 509 rounds of ammunition, shotgun shells and a magazine for the handgun.

A Virginia man has been arrested for allegedly trying to enter through a Washington DC checkpoint armed with a gun, 500 rounds of ammunition and fake credentials, according to a report