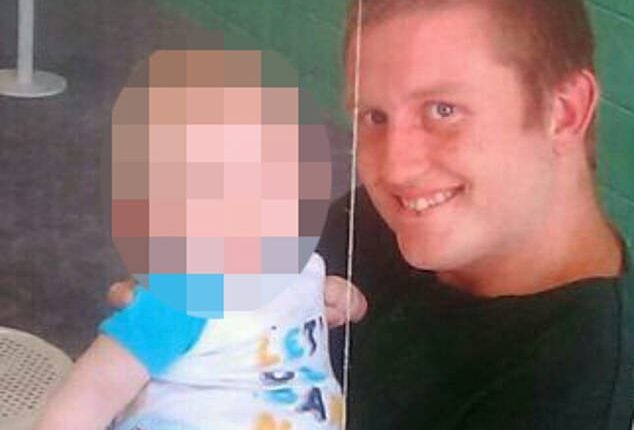 Wade Still’s girlfriend has revealed the last time she saw him was on the back of his killer’s motorbike holding a large fuel container.

Soon after, the 23-year-old was doused with petrol twice and burned to death in a disused quarry at Whitebridge, near Newcastle in NSW’s Hunter region.

Troy McCosker, 51, is on trial before a jury and has pleaded not guilty to murder and the alternative charge of laying an explosive substance, petrol, in front of his victim with intent to cause grievous bodily harm.

Mr Still managed to name his other alleged killer before dying from first degree burns to 90 per cent of his body on August 20, 2018.

That person has pleaded guilty to murder, but can’t be named for legal reasons.

Paige Millan, who was dating Mr Still in the weeks before his death, told the Newcastle Supreme Court on Tuesday about a number of phone calls Mr Still had with his killer about petrol. 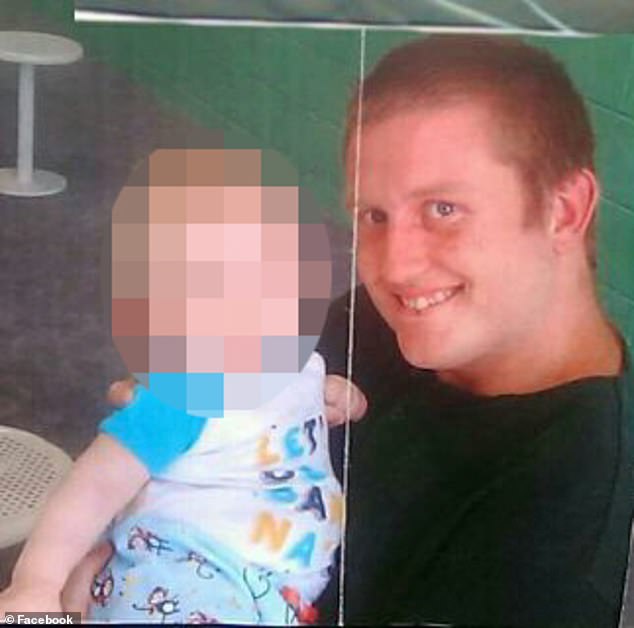 Father-of-two Wade Still (pictured), 23, was doused with petrol twice and burned to death in a disused quarry at Whitebridge, near Newcastle in NSW’s Hunter region on August 20, 2018

After driving Mr Still to a Windale bowser to fill up one of her fuel containers, she said she dropped him off at a designated meeting spot at Ringal Valley.

The court heard her boyfriend got out of the car, saying he would call in about 20 minutes.

Ms Millan said she watched Mr Still holding onto his soon-to-be killer and a large red petrol container as they drove away on a motorbike.

Another friend of Mr Still’s, David Rose, said he was aware there had been ‘bad blood’ between McCosker and his friend.

Mr Still claimed to Mr Rose that he was determined to make McCosker’s life ‘hell,’ and would often stand over him after breaking into his house, the court heard.

Ms Millan said only days before his death, Mr Still was confronted about stealing McCosker’s storage shed keys before he was caught out and returned them. 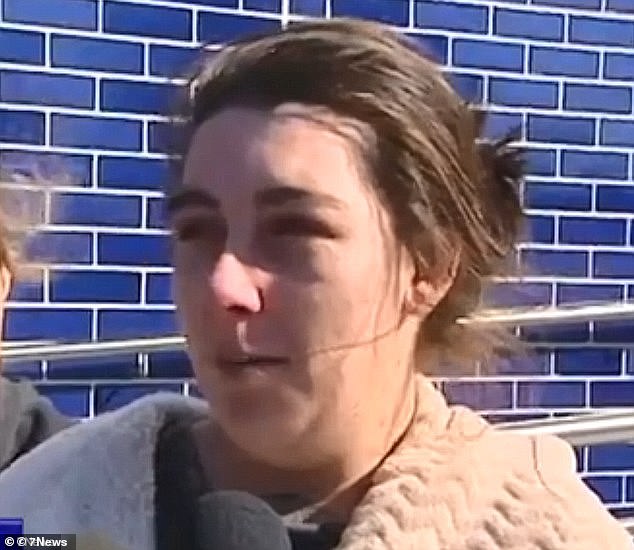 Paige Millan (pictured), who was dating Mr Still in the weeks before his death, told the Newcastle Supreme Court on Tuesday about a number of phone calls Mr Still had with his killer about petrol

Six months earlier, McCosker, along with a group of men, bashed Mr Still with a ‘wooden handlebar’ for a similar offence, the court heard.

Mr Rose smoked cannabis with Mr Still the night he was murdered, and said he was ‘cheery,’ ‘chirpy’ and ‘jumping around’ after taking some Xanax.

The Crown says Mr Still was first set alight just before 12.10am, after an argument.

McCosker was then allegedly tasked with driving the killer to get more petrol, and thus forming a joint criminal enterprise to ‘finish off’ Mr Still.

But McCosker claims he was sitting in his car ‘completely oblivious’ to what was happening while the killer was gone for about five minutes.

In the Newcastle Supreme Court on Monday, Kristy Stonestreet told the jury in that she met Mr Still early in 2018 when the pair began taking drugs together with others in her home. 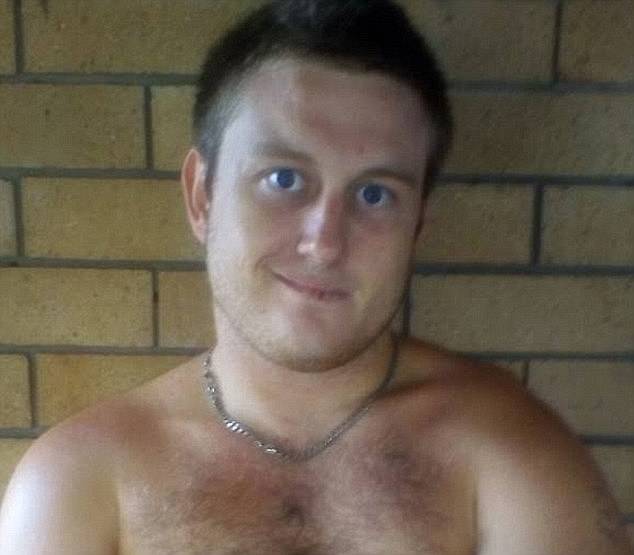 Mr Still (pictured) managed to name his killer before dying from first degree burns to 90 per cent of his body on August 20, 2018. The killer pleaded has guilty to murder, but can’t be named for legal reasons

She told the court Mr Still’s volatile moods were exacerbated by his use of ice, and he would often threaten to burn her house down and ‘kill her life’.

One day she remembers him ‘skipping’ down her driveway ‘happy and sweaty’, having just run all the way from a house McCosker was staying in with a friend.

‘He said “I got them”, and smiled and showed me cash, drugs and a big set of keys and wallet all in a satchel,’ Ms Stonestreet said.

Mr Still told her he had just returned from hitting McCosker in the head with a hammer a lot of times, to which she replied this will ‘come back to bite you’.

‘I said you can’t keep doing things like this. You will come unstuck.’

To which he responded: ‘I can do whatever I want… I’ll kill their life.’

A few weeks later in February 2018, McCosker allegedly turned up at her home along with several other men demanding to know where his keys and belongings were.

Distressed, she went outside while Mr Still was yelling ‘no, stop, stop, stop,’ she said. 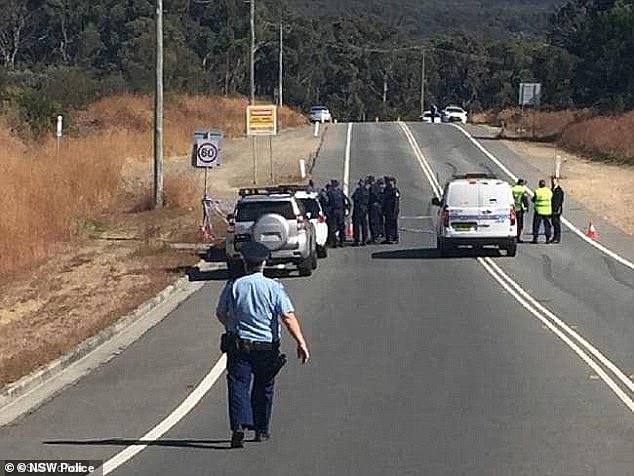 Mr Still died shortly after a taxi driver found him covered in flames on Oakdale Road (pictured) at Whitebridge, south of Newcastle, on August 20, 2018

After Ms Stonestreet retrieved the keys she had hidden in a green garbage bin, she ran them inside to where the men were bashing Mr Still with a wooden handle bar.

Following the assault, she saw two or three large gashes where his head split open, but he refused to go to hospital and had a neighbour stitch him up, the court heard.

But the bashing by McCosker did little to slow Mr Still down as he continued running into houses and stealing drugs before he was incarcerated for some time.

She said the last time she heard from Mr Still he assured her that he had patched his friendship up with McCosker and that they were ‘all good’.

‘His lifestyle was arranged around whatever Macca told him to do,’ she said. 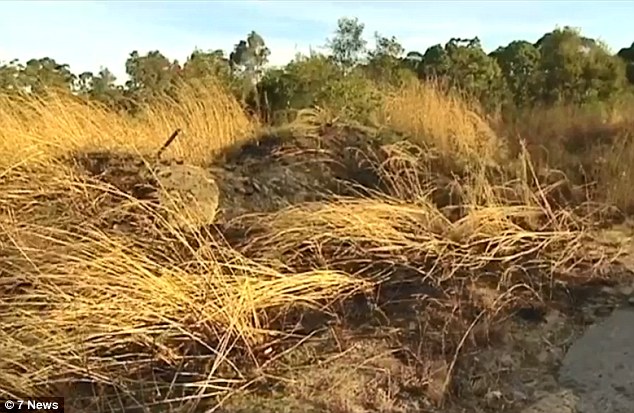 Burnt grass where Mr Still’s body was found. A firefighter initially responded to reports of a grass fire before discovering Mr Still ‘alive and screaming’