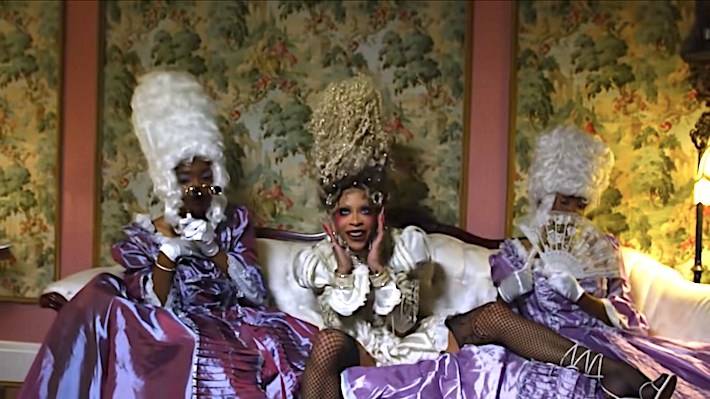 It seems hard to believe that Rico Nasty is only just making her television debut after dropping her debut album Nightmare Vacation, but that’s exactly what happened on the latest episode of The Tonight Show. Rico turned in an exaggerated, elegant performance of her album single “OHFR?” dressed up in yet another elaborate costume. This time, she was inspired by Marie Antoinette, decked out with a massive beehive and Victorian-era gown and flanked by ladies in waiting, providing a stark contrast to her raspy, rebellious lyrics and thundering soundtrack.

Interestingly, although last night was her first television performance, she’s actually been on TV before, in a roundabout way. Keen-eyed fans caught a slick visual reference to Rico in the latest season of Big Mouth, where a Rico Nasty poster adorns the walls of Missy’s cousins, Lena and Quinta, along with City Girls, SZA, and more. Rico’s music was also featured on the Insecure soundtrack and in the animated Scooby-Doo reboot movie Scoob!

Watch Rico Nasty’s elegant performance of “OHFR?” on The Tonight Show above.

Nightmare Vacation is out now via Atlantic Records. Get it here.

FG receives N144 billion in dividends from NLNG in 2020

‘We Recorded a Record That We Hadn’t Planned On’

Church of England must turn out to be extra concerned in politics, Archbishop of York…

Golden Globes Live Updates: The Latest From the Show