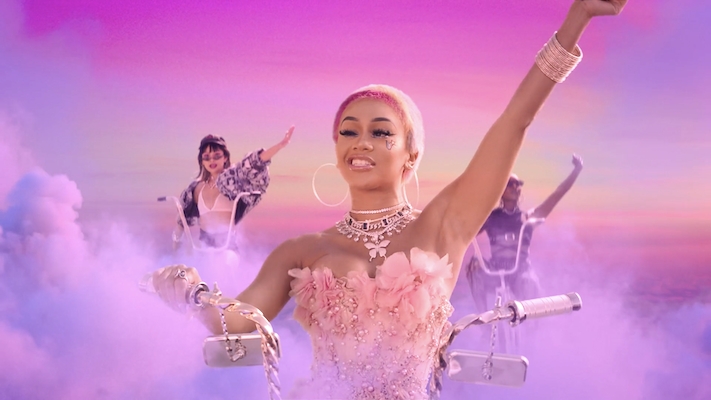 There’s still no release date for Saweetie’s long-anticipated Pretty Bitch Music album but in the meantime, the Santa Clara, California-born star has been spreading her influence across as many forms of media as she can. Her near-ubiquity includes appearances on Hot Ones, The Eric Andre Show, and her own Icy Life YouTube series, but that doesn’t mean she’s neglecting the music at all. After months of teasing, Saweetie released her dreamy “Back To The Streets” video with Jhene Aiko today, giving fans another tease of what’s to come.

The video opens with a flashback to Saweetie’s childhood in California’s Central Valley, with Saweetie getting her hair done as her tween crush knocks on the door. She’s advised to let him go because he’s “from the streets” before the video begins in earnest, with a grownup Saweetie riding a custom lowrider beach cruiser through the streets with her friends. They float off into the pink clouds, E.T.-style, and Saweetie performs in various fantasy locales, including a glammed-up beauty supply shop. Jhene joins her in a flowery fairyland and the video closes with a not-so-subtle nod to the song’s TikTok popularity.

Saweetie’s social media popularity is no fluke; from her inspired Beyonce-themed Halloween costumes to her deft reversal of every Twitter controversy, she’s shown the has what it takes to not just survive but thrive in the cutthroat music business. Pretty Bitch Music isn’t due until sometime in 2021, but until it drops, you can be sure she’ll keep hip-hop fans riveted to her every move.

Watch the “Back To The Streets” video above.

Yemi Alade and Other Talents to Announce Grammy Nominees I Notjustok

Proof that TV audiences ARE believing the fiction of Netflix series The Crown?