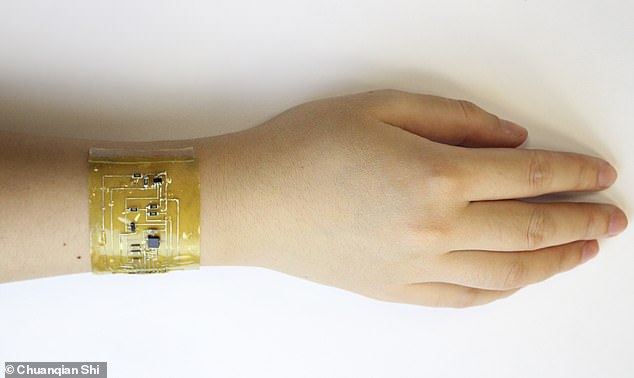 An environmentally-friendly alternative to wearable devices could come in the form of a self-healing ‘electronic skin’ that can monitor your heart rate and step count.

US experts developed the fully recyclable device — which acts like a stretchable circuit board — by encasing liquid metal wires between two flexible polymer layers.

The skin-like device could also be used, for example, to measure body temperature — and can be shaped to fit anywhere on the body, the team said.

An environmentally-friendly alternative to wearable devices could come in the form of a self-healing ‘electronic skin’, pictured, that can monitor your heart rate and step count

According to the team, the concept behind the device could lead to a future where the recyclable, high-tech ‘skins’ could allow people to collect biometric data without the electronic waste associated with, for example, smart watches.

Experts have predicted that — by next year — humanity will have produced more than 55 million tonnes of electronic waste in the form of discarded smartphones, laptops, tablets and other such devices.

‘Our solution to electronic waste is to start with how we make the device, not from the end-point, or when it’s already been thrown away,’ said Professor Xiao.

‘We want a device that is easy to recycle.’

To make the electronic skin, the researchers used a screen printing technique that allowed them to fashion a network of liquid metal wires — forming a circuit which they then encased between two thin films made of polyimine, a self-healing material.

The resulting device is ‘a little thicker’ than a sticking plaster, and can be applied to a person’s skin using heat, the team said.

The device can also be stretched by as much as 60 per cent in any given direction without disrupting or damaging the electronics within, they added.

‘If we want a truly wearable device, ideally it will be a thin film that can comfortably fit onto your body.’ 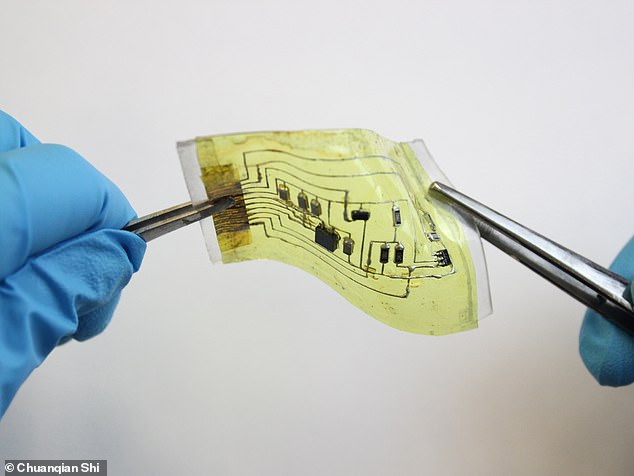 US experts developed the fully recyclable device, pictured — which acts like a stretchable circuit board — by encasing liquid metal wires between two flexible polymer layers 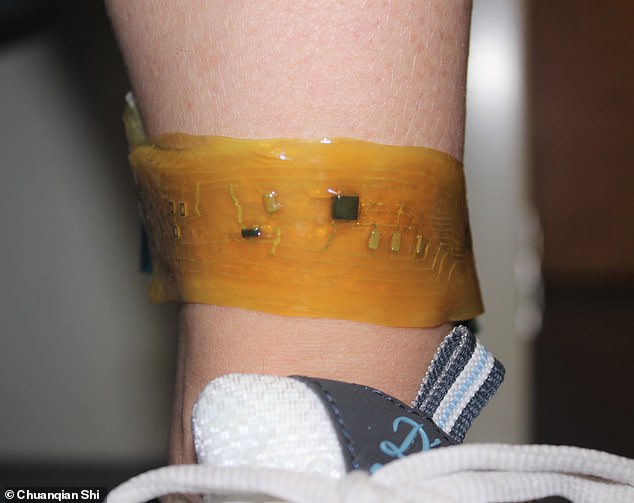 The skin-like device could also be used, for example, to measure body temperature — and can be shaped to fit anywhere on the body (such as around the ankle, pictured) — the team said

Professor Zhang explained that the electronic skin has the capability to heal itself in 13 minutes — as, when it gets damaged, the bonds that hold together the polyimine material together reform.

‘Those bonds help to form a network across the cut. They then begin to grow together,’ he said.

However, the electronic skin is a long way off of being able to compete with wearable devices in the commercial market — with one of its main limitations being that it still needs an external power source to work.

‘We haven’t realised all of these complex functions yet,’ Professor Xiao conceded.

‘But we are marching toward that.’

The full findings of the study were published in the journal Science Advances.

In research by Tsinghua University in Beijing, researchers took inspiration from animals such as chameleons and octopuses, replicating their colour-changing abilities with artificial electronic skin.

Their incredible material could be used in a variety of ways in the future, including in robotics, prosthetics and wearable technology used by armed forces.

Previous studies have created colour-changing artificial skin, but the colour changes have only been visible to the naked eye when the material is put under enormous strain of 100-500 per cent.

But the researchers from Tsinghua University in Beijing have developed a type of electronic skin with a colour change easily seen at just 0-10 per cent strain.

The material is made from graphene – a form of pure carbon that is 200 times stronger than steel.

Two layers of graphene are included – a highly-resistive strain sensor, alongside a stretchable organic electrochromic device (ECD) that changes colour when a current is applied.

Your data is up for sale

Desperate search for boy, 12, who mysteriously wandered away wearing a Parramatta Eels jersey