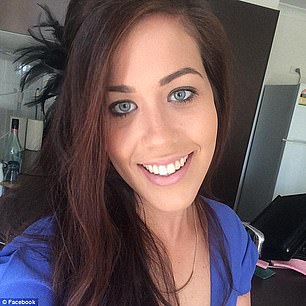 The woman at the centre of an NRL grand final celebration that turned into a deadly double stabbing has recounted her version of events at a long-awaited inquest.

Candice Locke was scared and injured when she knocked on Dean Webber’s home in Alva Beach, north Queensland, on September 30, 2018, begging for help.

She had hurt her shoulder and was being pursued by her 27-year-old boyfriend Tom Davy, 37-year-old Corey Christensen and three others.

At 12.20am, a group of men ripped down Mr Webber’s screen door and allegedly grabbed the young diesel fitter by the throat and threw him to the ground.

The then-19-year-old, who now has PTSD and is so traumatised he may not be able to give evidence, claimed he blindly thrust the knife into the darkness in the direction of the intruders, leaving Mr Davy and Mr Christensen with fatal stab wounds.

On Monday, Ms Locke took the stand at Cairns Magistrates Court to give evidence about what happened the night the pair died, the Townsville Bulletin reported.

Dean Webber, 19, (pictured) who now has PTSD and is so traumatised he may not be able to give evidence, claimed he blindly thrust the knife into the darkness

When a police interview recorded the day after the melee was played to the court, the now-31-year-old broke down.

Ms Locke revealed in the interview that she did not know one of the victims was her boyfriend until she was told by police.

The pair had met on a dating app four months prior and encountered Mr Christensen, a father-of-three, while fishing at Alva Beach on September 30, and were invited to an NRL Grand Final street party.

Ms Locke did not dispute multiple witnesses stating she was drunk on the night, adding that she had a drinking problem at the time.

The woman said she and Mr Davy had a fight because she didn’t want to leave the party.

She received a text message from her partner at 9.30pm that read: ‘I’ve told you six times I’m going and you’re either too drunk to realise what I’m actually saying to you or you’re stubborn as f***.’

‘Thanks for the good time so far but I guess everything good comes to an end.’

At 10.07pm he sent another text that read: ‘I’m waiting down the road for twenty minutes. Pull yourself together. Cone (sic) get a lift with me or I’ll just camp here the night and you can come get your keys from me.’

He sent another message four minutes later explaining that he was under coconut trees she was familiar with and was going to sleep there for the night.

Instead of messaging him back, Ms Locke got on the back of a buggy ridden by Louis Bengoa to look for her partner.

Under cross-examination on Tuesday, she said she did not recall reading the message with his location.

In her original interview, Ms Locke said she was given a ‘shove’ off the buggy, causing her to fall off onto ‘hard sand’ and hurt her shoulder.

In the chaos and darkness the then 19-year-old stabbed Corey Christensen, 37, (right) and Ms Locke’s boyfriend Tom Davy, 27, (left) after blindly thrusting a kitchen knife in the direction of the intruders

She told the court Mr Bengoa, who was ‘warm and friendly’ at the party, laughed at her and didn’t believe she was injured.

Ms Locke got on the buggy again, but got off shortly because she felt uncomfortable and hid behind a car.

Ms Phelan, who had also been at the party, asked the teary-eyed woman if she needed help, but said she refused and took off on a buggy with Mr Bengoa and Mr Christensen.

Mr Webber was asleep in his home nearby when Ms Locke – a stranger at the time – banged on the door saying she had hurt her shoulder and was being chased.

He tried to help her by calling emergency services at 12.24am while she crouched in the corner of the kitchen.

The triple-0 recordings were played for the courtroom full of the victims’ family and friends on Monday.

Candace Locke (pictured) could be heard sobbing in the background of the phone call, telling the operator she was pushed from a buggy and ran to the home for help

Ms Locke could be heard sobbing in the background of the phone call, telling the operator she was pushed from a buggy and ran to the home for help.

She told an emergency operator that Mr Christensen and Mr Bengoa were acting ‘crazy’, but admitted on Tuesday that ‘may have been an exaggeration’.

The woman explained the men were ‘just banging and [calling] my name’ outside Mr Webber’s home, adding that they sounded aggressive and did not seem concerned for her welfare.

Mr Webber’s voice sounded distressed on the phone as he revealed the men had arrived on his property.

He told the operator they were trying to break in and that he did not feel safe.

When emergency services still hadn’t arrived 20 minutes later, Mr Webber phoned police at 12.52am to report a break-in and beg for help.

Yelling could be heard in the background followed by a scream, as the operator ended the call.

Ms Locke said on Tuesday that she recalled being crouched in the kitchen during the stabbing when she heard a scuffle in the lounge room.

‘I need police right now, I just stabbed a bloke who broke into my house,’ he sobbed.

‘There’s blood everywhere, I think I killed him … I’m scared.’

An inquest into the two men’s deaths began on Monday. (Pictured photographs taken at the Webber home days after the incident show blood drops staining the concrete veranda)

‘He’s not moving … I can taste his blood. I think I stabbed him in the heart … I tried everything I could to protect myself … I thought they were going to kill me.’

He described the scene as a group of men stood around one of the victims but did not help.

Mr Webber told the operator he ‘did everything he could’ to protect himself, and confessed he was still holding the knife that he’d used.

He placed it down on the table when he was asked and began sobbing uncontrollably as he turned on the kitchen lights and surveyed the scene.

‘Oh my god… oh my god… there is blood everywhere… it’s everywhere,’ he sobbed.

The audio then cut to police arriving and shouting at him not to move, before it ended.

Mr Christensen and Mr Davy’s families have also both spoken of their search to find the truth of what happened last year (pictured: Mr Christensen’s wife)

The two men staggered outside the home where they bled to death on the lawn and in the gutter.

Mr Webber has never been charged after the triple-zero operator he had called prior to the attack reportedly left the line open for 50 minutes – effectively providing evidence he acted in self defence.

Ms Locke broke down in court on Tuesday and said her biggest regret was not leaving with Mr Davy that night.

She offered condolences to Mr Davy and Mr Christensen’s families.

June 2018: Candice Locke, 29 and Tom Davy, 27, met three months earlier via a dating app. Ms Locke was living in Ayr, about 90 minutes south of Townsville, and he in Cairns.

September 30, 2018: They met up with each other in Alva Beach, north of Queensland, for the NRL Grand Final long weekend.

The pair went for a fishing trip on a beach where they met local father-of-three Corey Christensen, 37.

Mr Davy and Mr Christensen bonded over their love of NRL and the pair were invited to watch the match on a vacant block next to his home.

After several hours of drinking, the trio and a group of Mr Christensen’s friends were joyriding quad bikes on the beach.

Ms Locke fell off one of the bikes, dislocated her shoulder and went to seek help because she said no one took her injury seriously.

She took off on a dirt track from the beach, which led into a town and she sought refuge to the first house she saw on 2 Topton Street.

Ms Locke knocked on the door pleading for assistance at 11.30pm when she met Dean Webber, 19, who was living in the property.

Minutes later, Mr Davy, Mr Christensen and a third man arrived and tried to break in, while they yelled at them not to call the cops, police sources said.

Mr Webber called police but was told there was only one officer at the Ayr station, about 20 minutes away and couldn’t come immediately due to people in custody.

Instead, Mr Webber turned off all the lights and shut the curtains.

Ten minutes later, the men ripped Mr Webber’s screen door and stormed inside his home saying ‘we’ve got you now, you little p***k’.

The men grabbed Mr Webber ’round the throat, lifted him off the ground and then threw him to the floor’.

Mr Webber ‘blindly thrust a kitchen knife in the dark’ to defend himself, hitting one man in the chest and the other through the armpit.

Mr Davy and Mr Christensen were stabbed a total of three times and stumbled outside before bleeding to death in the gutter.

Mr Webber was arrested when police arrived too late at about 4.30am, to save either man but was released without charge as detectives decided he acted in self-defence.