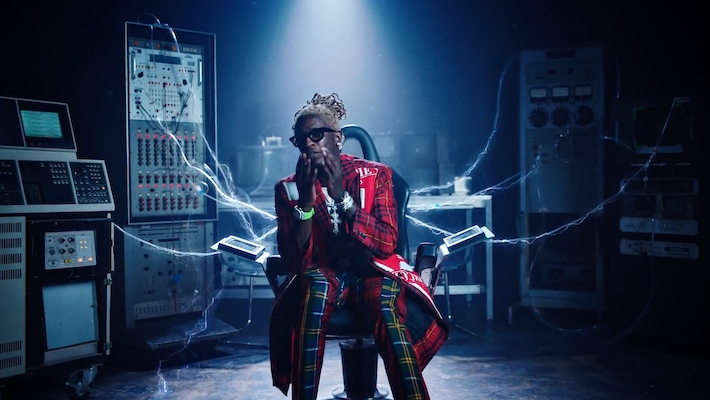 Bino Rideaux first earned notoriety thanks to impressive contributions on tracks with Dave East, Drakeo The Ruler, and Nipsey Hussle. Fresh off a record deal with Def Jam, Bino aimed to raise his stock even more with his 2020 project, Outside, which boasted features from Snoop Dogg, Blxst, Ty Dolla Sign, and more. Breathing new life into the project, Bino Rideaux earns another marquee cosign via Young Thug as the two connect in the video for the new remix of his Outside highlight, “Mismatch.”

Posted up with the homies in under a blend of red and blue lightning, Bino leads the way by firing off his verse on the track, which also he performs from an elevator accompanied by two of his friends. He also shows off a bit of a two-step as he raps through his verse while flexing his clean whip and a female partner, who poses in the passenger side with him.

Lending the mic to Young Thug, the ATL native also turns up with Bino and his crew while opting for the evil scientist look, as he sits in a makeshift lab that features live wires attached to him and flickering lights above him. The video ends with Bino paying his respects to Nipsey Hussle, Pop Smoke, and his late friend KP. Fellow YSL rapper Gunna also makes an appearance in the video.

Bino previously stopped by the UPROXX to perform “Mismatch” as a part of the UPROXX Sessions. Watch the video for the “Mismatch” remix above.