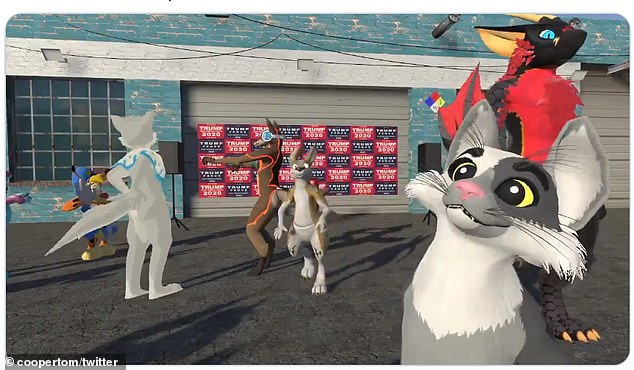 YouTuber Coopertom shared a clip of the virtual space he created on Twitter for VRChat, a massively multiplayer virtual reality platform.

Coopertom said it took five-and-a-half hours to build the scene, which includes details like Trump campaign signs, weathering on the building and what he dubs ‘the presidential hose reel.’

‘You’ve even got stuff behind the windows,’ one person comments. ‘You went that far with the detail. That’s some Half-Life nonsense,’ referencing the popular first person shooter game.

Many dress as a ‘fursona,’ or anthropomorphized animal character, to interact with the community.

According to WikiFur, Coopertom, also known as ‘Cooper,’ is a 37-year-old fursuiter from south New Jersey.

His handle comes from his love of the MiniCooper car and his ‘fursona,’ a gray-and-white tomcat. 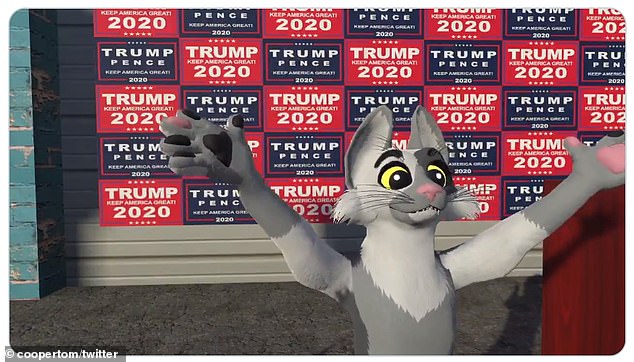 Cooper included details like Trump campaign signs, weathered teal walls, and a makeshift podium. He said he plans to add a sex shop and crematorium, just like at the real Four Seasons Total Landscaping

He hopes the attention his project has generated will lead to a job.

‘Hey, I’m out of work!’ he tweeted. ‘I can make crazy stuff like this for you. I also specialize [in] SOX compliance/reporting and SolarWinds monitoring. I NEED A JOB!’

The real-world Four Seasons Total Landscaping is sandwiched between an adult book store and a crematorium in Philadelphia’s Holmesburg neighborhood.

Cooper plans on building virtual versions of those businesses, as well. 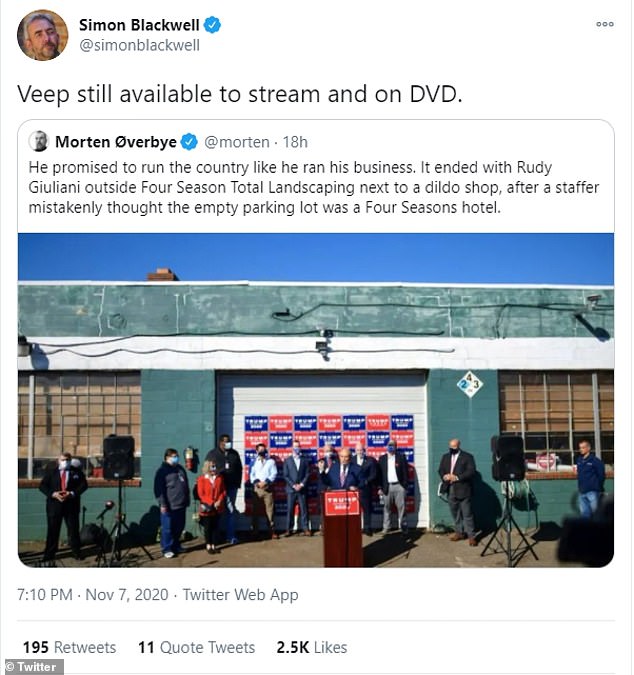 Simon Blackwell, who helped write ‘The Thick of It’ with Armando Iannucci, compared  Saturday’s press conference to an episode of ‘Veep’

And the owners of the gardening company are also capitalizing on its sudden fame.

The company, established in 1992, bills itself as a family-owned small business ‘owned by life long Philadelphians.’

According to FurScience, the furry fandom encompasses much more than just the ‘therians’ – or, people who feel as though they’re spiritually connected to animals.

Most create a ‘fursona,’ or anthropomorphized animal character for themselves, to interact with the community.

President Trump was roundly mocked after he announced a press event at the blighted lot, with many assuming someone in his campaign confused the garden center with the famed luxury hotel chain that shares its name.

In a since-deleted tweet, Trump said there would be a ‘big press conference’ at the ‘Four Seasons’ on Saturday morning.

However, this was soon corrected, with the Four Season hotel itself tweeting the gathering ‘will be held at Four Seasons Total Landscaping — no relation with the hotel.’

In a follow up, Trump confirmed the conference would be held at the landscaping center.

On Twitter, ‘The Thick of It’ co-creator Simon Blackwell compared the press conference to an episode of his other show, ‘Veep.’

‘He lost. He knows he lost,’ Jacob told Defector Media. Jacob added that the swarm of reporters and media were taking up his parking lot.

Trump did not attend the event, which was instead helmed by his lawyer Rudy Guiliani.

The former New York City mayor reiterated the campaign would continue challenging the election results, even as major media outlets called the race for Biden in the middle of the presser.

‘Networks don’t get to decide elections, courts do,’ Guiliani said.