By Ryan Fahey For Mailonline

A woman has been rescued after her husband locked her in their toilet for one-and-a-half years in India.

The 35-year-old mother-of-three, who was kept in a 3ft by 3ft lavatory for the past 18 months, was rescued by police and welfare officers in the village of Panipat, a city north of Delhi, on Tuesday.

The woman’s husband, Naresh Kumar, has been arrested by local police on suspicion of locking her away.

The mother-of-three was forced to live in subhuman conditions with her husband allegedly denying her food or water for days at a time, according to local media.

The 35-year-old mother-of-three, who was kept in a 3ft by 3ft lavatory for the past 18 months, was rescued by police and welfare officers in the village of Panipat, a city north of Delhi, on Tuesday 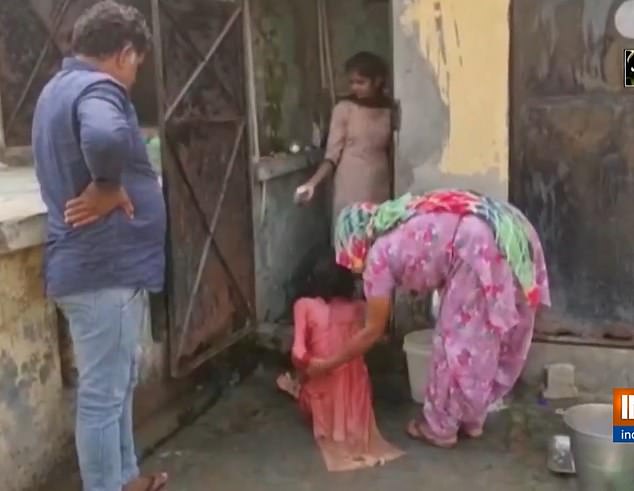 Pictured: The 35-year-old woman being rescued from the 3ft by 3ft toilet on Tuesday in Panipat, India

Locals tipped off the district’s womens’ protection officer, Rajni Gupta, who alerted police and travelled with them to the latrine, which was on the side of their house.

On arrival they found the woman lying on the floor of the toilet.

‘She was so weak that she could not even walk,’ Gupta told the Hindustan Times. ‘She ate eight chapattis when we gave her food’. 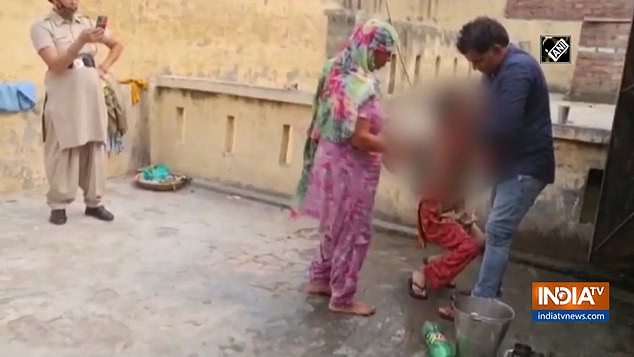 Rescuers said the woman, pictured, was so weak when they arrived that she could hardly walk

The woman, who has not been identified, was married to the suspect for 17 years and has three children between the ages of 11 and 15 with him.

The woman’s husband claimed his wife was mentally ill and had been treated for a psychiatric condition.

When asked to provide documents to support his story, he was unable to do so.

Gupta also interviewed the woman and discovered that she was mentally aware.

‘It is being said that she is mentally unstable, but it is not true,’ Gupta said.

‘We have talked to her and it was apparent that she is not mentally unstable.’

The woman was first taken to a state hospital before being handed into the care of her cousin.